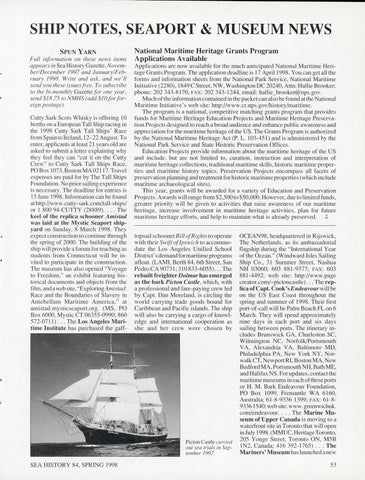 SHIP NOTES, SEAPORT & MUSEUM NEWS SPUN YARN Full information on these news items appears in Sea History Gazette, November/December 1997 and January/February 1998. Write and ask, and we' LI send you these issuesfi'ee. To subscribe to the bi-monthly Gazette for one year , send $18.75 to NMHS (add $10for foreign postage).

Cutty Sark Scots Whisky is offering 10 berths on a European Tall Ship racing in the 1998 Cutty Sark Tall Ships' Race from Spain to Ireland, 12-22August. To enter, applicants at least 21 years old are asked to submit a letter explaining why they feel they can "cut it on the Cutty Crew" to Cutty Sark Tall Ships Race, PO Box 1073,BostonMA02117. Travel expenses are paid for by The Tall Ships Foundation. No prior sailing experience is necessary. The deadline for entries is 15 June 1998. Info1mation can be found athttp://www.cutty-sark.com/tall-ships/ or 1 800 94-CUTTY (28889) .... The keel of the replica schooner Amistad was laid at the Mystic Seaport shipyard on Sunday, 8 March 1998. They expect construction to continue through the spring of 2000. The building of the ship will provide a forum for teaching as students from Connecticut will be invited to participate in the construction. The museum has also opened "Voyage to Freedom," an exhibit featuring hi storical documents and objects from the film, and a web site, "Ex ploringAmistad: Race and the Boundaries of Slavery in Antebellum Maritime America," at amistad.mysticseaport.org. (MS, PO Box 6000, Mystic CT 06355-0990; 860 572-0711) ... The Los Angeles Maritime Institute has purchased the gaff-

National Maritime Heritage Grants Program Applications Available Applications are now available for the much anticipated National Maritime Heritage Grants Program. The application deadline is 17 April 1998. You can get all the forms and information sheets from the National Park Service, National Maritime Initiative (2280), 1849 C Street, NW, Washington DC 20240, Attn: Hallie Brooker; phone: 202 343-8170, FAX: 202 343-1244, email: hallie_brooker@nps.gov. Much of the information contained in the packet can also be found at the National Maritime Initiative 's web site: http://www.cr.nps.gov/history/maritime. The program is a national, competitive matching grants program that provides funds for Maritime Heritage Education Projects and Maritime Heritage Preservation Projects designed to reach a broad audience and enhance public awareness and appreciation for the maritime heritage of the US. The Grants Program is authorized by the National Maritime Heritage Act (P. L. 103-451) and is administered by the National Park Service and State Historic Preservation Offices. Education Projects provide information about the maritime heritage of the US and include, but are not limited to, curation, instruction and interpretation of maritime heritage collections, traditional maritime skills, historic maritime properties and maritime history topics. Preservation Projects encompass all facets of preservation planning and treatmentfor historic maritime properties (which include mai:itime archaeological sites). This year, grants will be awarded for a variety of Education and Preservation Projects. Awards will range from $2,500 to $50,000. However, due to limited funds , greater priority will be given to activities that raise awareness of our maritime heritage, increase involvement in maritime heritage activities, plan for future maritime heritage efforts, and help to maintain what is already preserved. .t topsail schooner Bill ofRights to operate with their Swift of Ipswich to accommodate the Los Angeles Unified School District's demand for maritime programs afloat. (LAMI, Berth 84, 6th Street, San Pedro CA 90731; 310833-6055) ... The rebuilt freighter Do/mar has emerged as the bark Picton Castle, which, with a professional and fare-paying crew led by Capt. Dan Moreland, is circling the world carrying trade goods bound for Caribbean and Pacific islands. The ship will also be carrying a cargo of knowledge and international cooperation as she and her crew were chosen by