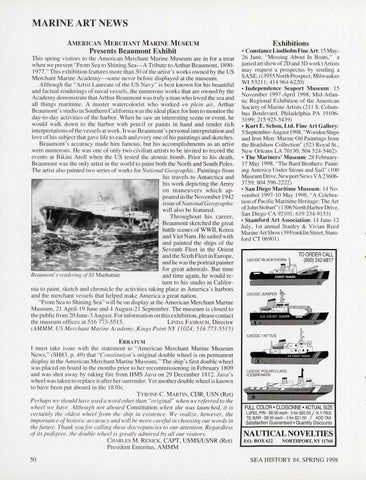 This spri ng visitors to the American Merchant Marine Museum are in for a treat when we present &quot;From Sea to Shining Sea-A Tribute to Arthur Beaumont, 18901977.&quot; This exhibition features more than 30 of the artist &#39;s works owned by the US Merchant Marine Academy-some never before displayed at the museum. Although the &quot; Artist Laureate of the US Navy&quot; is best known for his beautiful and fac tual renderings of naval vessels, the numerous works that are owned by the Academy demonstrate that Aithur Beaumont was truly a man who loved the sea and all things maritime. A master watercolorist who worked en plein air, Arthur Beaumont&#39;s studio in Southern California was the ideal place for him to monitor the day-to-day activities of the harbor. When he saw an interesting scene or event, he would walk down to the harbor with pencil or paints in hand and render rich interpretations of the vessels at work. It was Beaumont&#39;s personal interpretation and love of hi s subject that gave life to each and every one of his paintings and sketches. Beaumont&#39;s accuracy made him famous , but hi s accomplishments as an artist were numerous. He was one of on ly two civilian arti sts to be invited to record the events at Bikini Atoll when the US tested the atomic bomb. Prior to his death , Beaumont was the only artist in the world to paint both the North and South Poles. The artist also painted two series of works for National Geographic. Paintings from his travel s to Antarctica and his work depicting the Army on maneuvers which appeared in the November 1942 issue of National Geographic will also be featured . Throu g hout hi s career, Beaumont sketched the great battle scenes of WWII, Korea and Viet Nam. He sailed with and painted the ships of the Seventh Fleet in the Orient and the Sixth Fleet in Europe, and he was the portrait painter for great admirals. But time Beaumont&#39;s rendering of SS Manhattan and time again , he would return to his studio in California to paint, sketch and chronicle the activities taking place in America &#39;s harbors and the merchant vessels that helped make America a great nation. &quot;From Sea to Shining Sea&quot; will be on display at the American Merchant Marine Museum , 2 1 April-19 June and 4 August-21 September. The museum is closed to the public from 20 June-3 August. For information on this exhibition, please contact the museum offices at 516 773-5515 . LINDA FASBACH, Director

I must take issue with the statement in &quot; American Merchant Marine Museum News,&quot; (SH83, p. 49) that &quot;Constitution &#39;s original double wheel is on permanent display in the Ameri can Merchant Marine Museum. &quot; The ship &#39;s first double wheel was placed on board in the months prior to her recommissioning in February 1809 and was shot away by raking fire from HMS Java on 29 December 1812. Ja va&#39;s wheel was taken to replace it after her s urrender. Yet another double wheel is known to have been put aboard in the 1830s. TYRONE C. MARTIN, CDR, USN (Ret)

Perhaps we should have used a word other than &quot;original&quot; when we referred to the wheel we have. Although not aboard Constitution when she was launched, it is certainly the oldest wheel from the ship in existence. We realize, however, the importance of historic accuracy and will be more careful in choosing our words in the future. Thank you for calling these discrepancies to our attention. Regardless of its pedigree, the double wheel is greatly admired by all our visitors. CHARLES M. RENI CK, CAPT, USMS/USNR (Ret) President Emeritus, AMMM 50