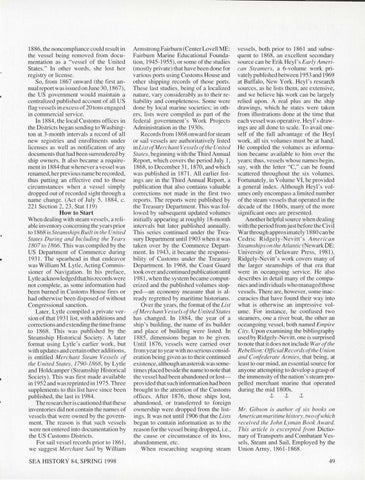 1886, the noncompliance could resul t in the vessel being removed fro m doc umentati on as a &quot;vessel of the United States.&quot; In other word s, she lost her registry or license. So, from 1867 onward (the firs t annual report was issued on June 30, 1867), the US government wo uld maintain a centralized published account of all US flag vessels in excess of20 tons engaged in commercial service. In 1884, the local Customs offices in the Di stri cts began sending to Washington at 3-month intervals a record of all new registries and enro llments under licenses as well as notifi cation of any documents thathad been surrende red by ship owners. It also became a requirement in 1884 that whenever a vessel was renamed, her previous name be recorded, thus putting an effecti ve end to those circum stances when a vesse l s imply dropped o ut of recorded sight thro ugh a name change. (Act of July 5, 1884, c . 22 1 Secti on 2, 23, Stat 11 9) How to Start When dea ling with steam vesse ls, a reliable inventory concerning the years prio r to 1868 is Steamships Built in the United States During and Including the Years 1807to 1866. Thi s was compil ed by the US Department of Commerce duri ng 193 1. The spearhead in that endeavo r was Wi lli am M. Lytle, Acting Commissioner of Navigati on. In hi s preface, Lytle acknowledged that his reco rds were not complete, as some info rmati on had been burned in Customs House fires o r had otherwise been disposed of witho ut Congressional sanction. Later, Lytle compiled a pri vate version of that 193 1 li st, with addi tions and coITections and extending the time fram e to 1868. Thi s was publ ished by the Steamship Histori cal Soc iety. A later format using Lytle&#39;s earlier work, b ut wi th upda tes and certain other add itions, is entitled Merchant Steam Vessels of the United States, 1790-1 868, by Lytl e and Holdcamper (Steamship Historical Society). Thi s was first made avail abl e in 1952and was reprinted in 1975. Three supp lements to thi s list have since been publi shed, the last in 1984. The researcher is cauti oned that these inventories did not contain the names of vessels that were owned by the govern ment. The reason is that such vessels were not entered into documentation by the US Customs Districts. For sail vessel records pri or to 186 1, we suggest Merchant Sail by Willi am SEA HISTORY 84, SPRING 1998

Armstrong Fairburn (Center Lovell ME: Fairburn Marine Ed ucational Foundation, 1945-1 955), or some of the studies (mostly private) th at have been done for various ports using Customs House and other shipping records of those ports. These last studies, being of a localized natu re, vary considerabl y as to their reliability and compl eteness. Some were done by local marine societies; in others, lists were compiled as part of the federal government &#39;s Work Projects Administrati on in the 1930s. Records fro m 1868 onward fo r steam or sa il vessels are authoritati ve ly listed in List ofMerchant Vessels ofthe United States, beginning with the Third Annual Report, which covers the peri od July 1, 1868, to December 3 1, 1870, and which was publi shed in 187 1. A ll earlier listings are in the Third Annual Report, a publication that also contains valuable corrections not made in the first two reports. The reports were published by the Treasury Department. Thi s was followed by subsequent updated volumes initially appearing at roughl y 18-month inte rvals but later publi shed annually. Thi s series continued under the Treasury Department until 1903 when it was taken over by the Commerce Department. In 1943, it became the responsibil ity of Customs under the Treasury Department. In 1968, the Coast Guard took over and continued pub I ication until 198 1, when the system became computerized and the publi shed volumes stopped-an economy measure that is already regretted by maritime histori ans. Over the years, the fo rmat of the List ofMerchant Vessels of the United States has changed. ln 1884, the year of a shi p&#39;s building, the name of its builder and place of building were listed. In 1885, dimensions began to be given. U ntil 1876, vessels were carried over from year to year with no serious consideration be ing given as to their continued existence, although an asterisk was sometimes placed bes ide the name to note that the vessel had been abandoned or lostprovided that such inform ation had been brought to the attention of the Customs offices. After 1876, those ships lost, abandoned, or transferred to fo re ign ownership were dro pped from the listings. It was not until 1906 that the Lists began to contain info 1mation as to the reason for the vesse l be ing dropped, i.e., the cause or circum stance of its loss, abandonment, etc. When researching seagoing steam

vessels, both pri or to 186 1 and subsequent to 1868, an excell ent secondary source can be Erik Hey l&#39; s Early American Steamers, a 6-vo lume work pri vately publi shed between 1953 and1 969 at Buffalo, New York. Heyl &#39;s research sources, as he li sts them, are extensive, and we be lieve his work can be largely relied upon. A real plus are the shi p drawings, which he states were taken from illustrations done at the time that each vessel was operati ve. Heyl &#39;s drawings are all done to scale. To avail oneself of the full advantage of the Heyl work, a ll six volumes mu st be at hand. He compil ed the volumes as info rmation became availabl e to him over the years; thu s, vessels whose names begin , say, with the letter &quot;C,&quot; can be fo und scattered th ro ughout the six volumes. Fortunately, in Volume VI, he prov ided a genera l index. Although Heyl&#39;s vo lumes onl y encompass a limited number of the steam vessels that operated in the decade of the 1860s, many of the more signifi cant ones are presented. Another helpful source when dealing with the peri od from just before the C ivil War through approximately 1880 can be Cedri c Rid ge ly-Nev itt &#39;s American Steamships on the Atlantic (Newark DE: University of Delaware Press, 198 1). Ridgely-Nev itt &#39;s work covers many of the larger steamships of that era that were in oceango ing service. He also describes in deta il many of the companies and indi viduals who managed those vesse ls. There are, however, some inaccuracies that have fo und their way into what is otherwise an impressive volume. For in stance, he confused two steamers, one a ri ver boat, the other an oceango ing vessel, both named Empire City. Upon examining the bibli ography used by Ridgely-Nev itt, one is surprised to note that it does not include War of the Rebellion: Official Records ofthe Union and Confederate Armies, that being, at least to our mind , an essenti al source fo r anyone attempting to develop a grasp of the immensity of the nation &#39;s steam propelled merchant marine that operated during the mid 1800s. ,t

Mr. Gibson is author of six books on American maritime history, two ofwhich received the John Lyman Book Award. This article is excerpted from Dictionary of Transpo rts and Combatant Vessels, Steam and Sail , Employed by the Union Arm y, 186 1-1868. 49