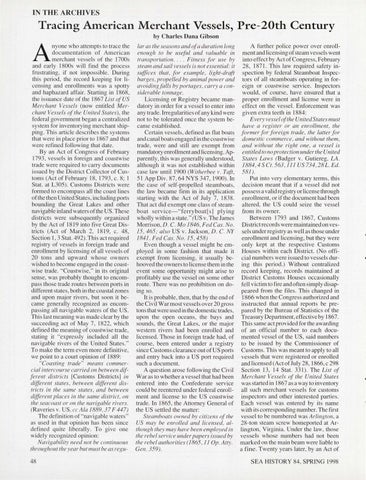 nyone who attempts to trace the far as the seasons and ofa duration long doc umentation of American enough to be useful and valuable in merchant vessels of the J 700s transportation . ... Fitness for use by and early 1800s will find the process steam and sail vessels is not essential: it fru strating, if not imposs ible. During suffices that, f or example, light-draft thi s period, the record keeping for li - barges, propelled by animal power and censing and enrollments was a spotty avoiding falls by portages, carry a conand haphazard affair. Starting in 1868, siderable tonnage. the issuance date of the 1867 List of US Licensing or Reg istry became manMerchant Vessels (now entitled Mer- datory in order for a vessel to enter into chant Vessels of the Un ited States) , the any trade. Irregul arities ofany kind were federal government began a centrali zed not to be tolerated once the system besystem for inventorying merchant ship- came establi shed . ping. Thi s article describes the systems Certain vessels, defined as flat boats that were in place prior to 1867 and that and canal boats engaged in the coastwise were refined following that date. trade, were and still are exempt from By an Act of Congress of February mandatory enrollment and licensing. Ap1793 , vessels in foreign and coastwise parently, thi s was generally understood, trade were required to carry documents although it was not established within iss ued by the District Collector of Cus- case law until 1900 (Witherbee v. Taft, tom s (Act of February 18, 1793, c. 8; l 51 App Div. 87, 64 YS 347, 1900). In Stat. at L305). Customs Di stricts were the case of self-propelled steamboats, fo1med to encompass all the coast lines the law became firm in its application of the then United States, including ports starting with the Act of Jul y 7, 1838. bounding the Great Lakes and other That act did exempt one class of steamnavigable inland waters of the US. These boa t se rvice-&quot;ferry boa t[ s] pl y ing di stricts were subsequently organized wholly within a state.&quot; (U S v. The James by the Act of 1819 into five Great Di s- MmTison , D . C. Mo 1846, Fed Cas. No. tricts (Act of March 2, 1819, c. 48 , 15, 465; also US v. Jackson, D. C. NY Section l , 3 Stat. 492). This act required 1841, Fed Cas. No. 15 , 458) registry of vessels in foreign trade and Even though a vessel might be emenrollment by licensing of al 1vessels of ployed in some fashion that made it 20 ton s and upward whose owners exempt from li censing, it usuall y bewished to become engaged in the coast- hooved the owners to 1icense them in the wise trade. &quot;Coastwise,&quot; in its original event some opportunity might arise to sense, was probably thought to encom- profitably use the vessel on some other pass those trade routes between ports in route. There was no prohibition on dodifferent states, both in the coastal zones ing so. and upon major rivers , but soon it beIt is probable, then , that by the end of came generally recognized as encom - the Civil War most vessels over20 gross pass ing all navigable waters of the US. tons that were used in the domestic trades, Thi s last meaning was made clear by the upon the open oceans, the bays and succeeding act of May 7, 1822, which sounds, the Great Lakes, or the major defined the meaning of coastwise trade, western rivers had been enrolled and stating it &quot;expressly included all the licensed. Those in foreign trade had, of navigable rivers of the United States.&quot; course, been entered under a registry To make the te1m even more definitive, since Customs clearance out of US ports we point to a court opinion of 1889: and entry back into a US port required &quot;Coasting trade&quot; means commer- such a document. cial intercourse carried on between difA question arose followi ng the Civil f erent districts [Customs Di stricts] in War as to whether a vessel that had been different states, between different dis- entered into the Confederate service tricts in the same states, and between could be reentered under federal enrolld!fferent places in the same district, on ment and license to the US coastwise the seacoast or on the navigable rivers. trade. In 1865 , the Attorney General of (Raveries v. US, cc Ala 1889, 37 F 447) the US settled the matter: The definition of&quot;navigable waters&quot; Steamboats owned by citizens of the as used in that opinion has been since US may be enrolled and licensed, aldefin ed quite liberally. To give one though they may have been employed in widely recognized opinion: the rebel service under papers issued by Navigability need not be continuous the rebel authorities (1865 , 11 Op. Atty. throughout the year but must be as regu- Gen. 359). 48

A further police power over enro ll ment and licensing of steam vessels went into effect by Act of Congress, February 28, 1871. This law required safety inspection by federal Steamboat Inspectors of all steamboats operating in foreign or coastwi se service. Inspectors wou ld , of course, have ensured that a proper enrollment and license were in effect on the vessel. Enforcement was g ive n extra teeth in 1884: Every vessel ofthe United States must have a register or an enrollment, the fo rmer for fo reign trade, the latter for domestic commerce, and without them, and without the right one, a vessel is entitled to no protection under the United States Laws (Badger v. Gutiereg, LA . 1884, 4 S Ct. 563, 111US 734 , 28 L. Ed. 581). Put into very elementary terms, thi s decision meant that if a vessel did not possess a valid registry or license through enrollment, or if the document had been altered , the US could seize the vessel from its owner. Between 1793 and 1867, Customs District records were maintained on vessels under registry as well as those under enro llment and licensing, but they were on ly kept at the respective Customs Houses with in each District. (No official numbers were issued to vessels during thi s period .) Without centrali zed record keeping, records maintained at District Customs Houses occasionall y fell victim to fire and often simply di sappeared from the files. This changed in 1866 when the Congress authorized and in stru cted that annual reports be prepared by the Bureau of Statistics of the Treasury Department, effective by 1867. This same act provided for the awarding of an official number to each documented vessel of the US, sa id numbers to be issued by the Commiss ioner of Customs. Thi s was meant to apply to all vessels that were registered or enro lled and licensed (Act of July 28, 1866, c 298 Section 13, 14 Stat. 331). The List of Merchant Vessels of the United States was started in 1867 as a way to inventory all such merchant vessels for customs inspectors and other interested parties. Each vessel was entered by its name with its corresponding number. The first vessel to be numbered was Arlington, a 28-ton steam screw homeported at Arlington , Virginia. Under the law, those vesse ls whose numbers had not been marked on the main beam were liable to a fine. Twenty years later, by an Act of SEA HISTORY 84, SPRING 1998