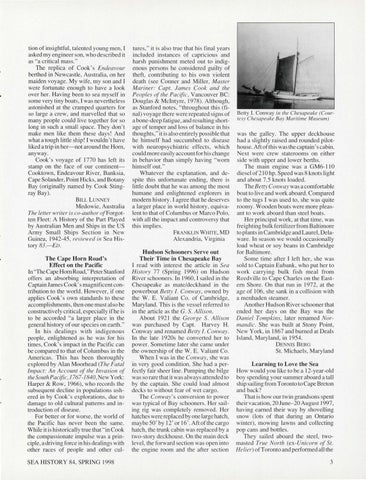 tion of insightful , talented young men , I asked my eng ineer son, who described it as &quot;a critical mass.&quot; The repli ca of Cook &#39;s Endeavour berthed in Newcastle, Australia, on her maiden voyage. My wife, my son and I were fortunate enough to have a look over her. Hav ing been to sea myself in some very tin y boats, I was nevertheless astoni shed at the cramped quarters for so large a crew, and marve lled that so many people could live together for so long in such a small space. They don &#39; t make men like them these days! And what a tough little ship! I wo uldn &#39;t have liked a trip in her-not aro und the Horn , anyway. Cook &#39;s voyage of 1770 has left its stamp on the face of our continentCooktown , Endeavour Ri ver, Banksia, Cape Solander, Point Hicks, and Botany Bay (originally named by Cook Stingray Bay) . BILL L UNNEY

Medow ie, Australia The letter writer is co-author ofForgotten Fleet: A Hi story of the Part Played by Australian Men and Ships in the US Army Small Ships Section in New Guinea, 1942-45 , reviewed in Sea Hi story 83 .- Eo.

The Cape Horn Road &#39;s Effect on the Pacific In &quot;The Cape Horn Road,&quot; Peter Stanford offers an absorbing interpretation of Captain Jam es Cook &#39;s magnificent contribution to the world. However, if one applies Cook &#39;s own standards to these accomplishments, then one must also be constructively critical, especially ifhe is to be accorded &quot;a larger pl ace in the general history of our species on earth. &quot; In hi s dealings w ith indigenou s people, enlightened as he was for his times, Cook &#39;s impact in the Pacific can be compared to that of Columbus in the Americas. This has been thoroughly explored by Alan Moorhead (The Fatal Impact: An Account of the Invasion of theSouthPacific, 1767-1840, New York: Harper &amp; Row , 1966), who records the subsequent decline in populations ushered in by Cook&#39;s explorations, due to damage to o ld cultu ral patterns and introduction of disease. For better or for worse, the world of the Pacifi c has never been the same. While it is hi storically true that &quot; in Cook the compass ionate impul se was a principle, a driving fo rce in hi s deal in gs with other races of people and other culSEA HISTORY 84, SPRING 1998

tures,&quot; it is also true that hi s final years included instances of capric ious and harsh puni shment meted out to indigenous persons he considered guilty of theft, contributing to hi s own violent death (see Conner and Miller, Master Mariner: Capt. James Cook and the Peoples of the Pacific, Vancouver BC: Douglas &amp; Mcintyre, 1978). Although, as Stanford notes, &quot;througho ut thi s (final) voyage there were repeated signs of a bone-deep fatigue , and res ulting shortage of temper and loss of balance in hi s thoughts,&quot; it is also entirely possible that he himself had succumbed to disease with neuropsychiatric effects, whi ch could more easil y account fo r hi s change in behav ior than simpl y hav ing &quot;worn himself out. &quot; Whatever the explanation, and despite this unfo rtunate end ing, there is little doubt that he was among the most humane and en lightened explorers in modern history. I agree that he deserves a larger pl ace in world history , equivalent to that of Columbus or Marco Polo, with all the impact and controversy that this implies. FRANKLIN WHITE, MD A lexandri a, Virgini a

Hudson Schooners Serve out Their Time in Chesapeake Bay I read with interest the arti c le in Sea History 77 (Spring 1996) on Hudson Ri ver schooners. In 1960, I sailed in the Chesapeake as mate/deckhand in the powerboat Betty I. Conway, owned by the W. E. Valiant Co. of Cambridge, Maryland. This is the vessel referred to in the article as the G. S. Allison. About 192 1 the George S. Allison was purchased by Capt. Harvey H. Conway and renamed Betty I . Conway. In the late 1920s he converted her to power. Sometime later she came under the ownership of the W . E . Valiant Co. When I was in the Conway, she was in very good condition. She had a perfectly fair sheer line. Pumping the bilge was so rare that it was always attended to by the captain. She could load almost decks to without fear of wet cargo. The Conway&#39;s conversion to power was typical of Bay schooners. Her sailing rig was completely removed. Her hatches were replaced by one large hatch, maybe50 &#39; by 12&#39; or 16 &#39; . Aft of the cargo hatch, the trunk cabin was repl aced by a two-story deckhouse. On the main deck level, the forward section was open into the engine room and the after section

was the galley. The upper deckhouse had a sli ghtly ra ised and rounded pilothouse. Aft of this was the captain &#39;s cabin. Next were crew staterooms on e ither side with upper and lower berths. The main eng ine was a GM6- l 10 diesel of210 hp. Speed was 8 knots light and abo ut 7 .5 knots loaded. The Betty Conway was a comfortable boat to 1ive and work aboard. Compared to the tugs I was used to, she was quite roomy. Wooden boats were more pleasant to work aboard than steel boats. Her principal wo rk, at that time, was frei ghting bul k fe rtilizer from Baltimore to plants in Cambridge and Laurel, Delaware. In season we wo uld occas ionall y load wheat or soy beans in Cambridge for Baltimore. Some time after I left her, she was sold to Captain Eubank, who put her to work carryin g bulk fi sh mea l fro m Reedville to Cape Charles on the Eastern Shore. On that run in 1972, at the age of 106, she sank in a colli sion w ith a menhaden steamer. Another Hudson River schooner that ended her days on the Bay was the Daniel Tompkins, later renamed Normandic. She was built at Stony Point, New York, in 1867 and burned at Deals Island, Maryland, in 1954. D ENN IS B ERG

Learning to Love the Sea How would you like to be a 12-year-old boy spending your summer aboard a tall ship sailing from Toronto to Cape Breton and back? That is how our tw in grandson s spent their vacation, 20 J une-20 August 1997, hav ing earned their way by shovelling snow (lots of that during an Ontario winter) , mowing law ns and collecting pop cans and bottles. They sailed aboard the steel, twomas ted True North (ex-Unicorn of St. H elier) of Toronto and performed all the 3