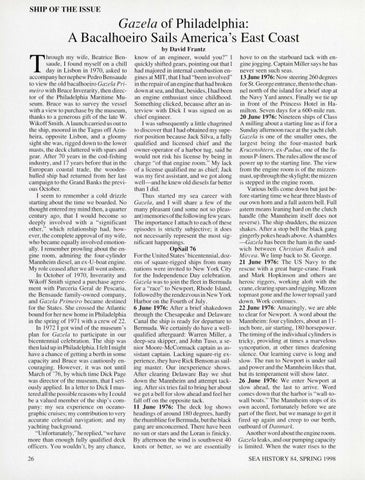 Gaze la of Philadelphia: A Bacalhoeiro Sails America&#39;s East Coast hrough my wife, Beatrice Bensaude, I found myself on a chill day in Lisbon in 1970, asked to accompany her nephew Pedro Bensaude to view the old bacalhoeiro Gaze/a Primeiro with Bruce Inverarity, then di.rector of the Philadelphia Maritime Museum . Bruce was to survey the vessel with a view to purchase by the museum , thanks to a generous gift of the late W . Wikoff Smith. A launch carried us out to the ship, moored in the Tagus off Azinheira, opposite Li sbon, and a gloomy sight she was, rigged down to the lower masts, the deck cluttered with spars and gear. After 70 years in the cod-fishing industry , and 17 years before that in the European coastal trade, the woodenhulled ship had returned from her last campaign to the Grand Banks the previous October. I seem to remember a cold drizzle starting about the time we boarded. No thought entered my mind then, a quarter century ago, that I would become so deeply involved with a &quot;significant other,&quot; which relationship had, however, the complete approval of my wife, who became equally involved emotionally. I remember prowling about the engine room, admiring the fo ur-cylinder Mannheim diesel, an ex-U-boat engine. My role ceased after we all went ashore. In October of 1970, Inverarity and Wikoff Smith signed a purchase agreement with Parceria Geral de Pescaria, the Bensaude family-owned company, and Gaze/a Primeiro became destined for the States. She crossed the Atlantic bound for her new home in Philadelphia in the spring of 1971 with a crew of 22. In 1972 I got wind of the museum &#39; s plan for Gaze/a to participate in our bicentennial celebration. The ship was then laid up in Philadelphia. I felt I might have a chance of getting a berth in some capacity and Bruce was cautiously encouraging. However, it was not until March of &#39; 76, by which time Dick Page was director of the museum , that Iseriously applied. In a letter to Dick I mustered al l the possible reasons why I could be a valued member of the ship &#39;s company: my sea experience on oceanographic cruises; my contribution to very accurate celestial navigation ; and my yachting background. &quot; Unfortunately,&quot; he replied, &quot; we have more than enough fully qualified deck officers. You wouldn &#39; t, by any chance,

by David Frantz know of an engineer, would you?&quot; I quickly shifted gears, pointing out that I had majored in internal combustion engines at MIT, that I had &quot;been involved&quot; in the repair of an engine that had broken down at sea, and that, besides, I had been an engine enthusiast since childhood. Something clicked, becau se after an interview with Dick I was signed on as chief engineer. I was subsequently a little chagrined to discover that I had obtained my superior position because Jack Si lva, a fully qualified and licensed chief and the owner-operator of a harbor tug, said he would not ri sk his license by being in charge &quot; of that engine room. &quot; My lack of a license qualified me as chief; Jack was my first assistant, and we got along well-and he knew old diesels far better than I did. Thus started my sea career with Gaze/a, and I will share a few of the many pleasant (and some not so pleasant) memories of the following few years. The importance I attach to each of these episodes is strictly subjective; it does not necessarily represent the most significant happenings.

OpSail 76 For the United States&#39; bicentennial , dozens of square-rigged ships from many nations were invited to New York City for the Independence Day celebration. Gaze/a was to join the fleet in Bermuda for a &quot;race&quot; to Newport, Rhode Island, followed by the rendezvous in New York Harbor on the Fourth of July. 6 June 1976: After a brief shakedown through the Chesapeake and Delaware Canal the ship is ready for departure to Bermuda. We certainly do have a wellqualified afterguard: Warren Miller, a deep-sea skipper, and John Tuso, a senior Moore-McCormack captain as assistant captain. Lacking square-rig experience, they have Rick Benson as sailing master. Our inexperience shows. After clearing Delaware Bay we shut down the Mannheim and attempt tacking. After six tries fail to bring her about we get a bell for slow ahead and feel her fall off on the opposite tack. 11 June 1976: The deck log shows headings of around 180 degrees, hardly the rhumbline for Bermuda, but the black gang are unconcerned . There have been no sun or stars and the Loran is fini cky. By afternoon the wind is southwest 40 knots or better, so we are essentially

hove to on the starboard tack with engine jogging. Captain Miller says he has never seen such seas. 13June1976: Now steering 260 degrees for St. George entrance, then to the channel north of the island for a brief stop at the Navy Yard annex. Finally we tie up in front of the Princess Hotel in Hamilton . Seven days for a 600-mile run. 20 June 1976: Nineteen ships of Class A milling about a starting line as iffor a Sunday afternoon race at the yacht club. Gaze/a is one of the smaller ones, the largest being the four-masted bark Kruzenshtern, ex-Padua, one of the famous P-liners. The rules allow the use of power up to the starting line. The view from the engine room is of the mizzenmast, up through the sky light; the mizzen is stepped in the engine room. Various bells come down but just before starting time we hear three blasts of our own horn and a full astern bell. Full astern means leaning hard on the clutch handle (the Mannheim itself does not reverse). The ship shudders, the mizzen shakes. After a stop bell the black gang gingerly pokes heads above. A shambles -Gaze/a has been the ham in the sandwich between Christian Radich and Mircea. We limp back to St. George. 21 June 1976: The US Navy to the resc ue with a great barge-crane. Frank and Mark Hopkinson and others are heroic riggers, working aloft with the crane, clearing spars and rigging. Mizzen topmast gone and the lower topsail yard down. Work continues. 22 June 1976: Amazingly, we are able to clear for Newport. A word about the Mannheim : four cylinders, about an 11inch bore, air starting, 180 horsepower. The timing of the individual cy linders is tricky, providing at times a marvelous syncopation , at other times deafening silence . Our learning curve is long and slow. The run to Newport is under sail and power and the Mannheim I ikes that, but its temperament will show later. 26 June 1976: We enter Newport at slow ahead , the last to arrive. Word comes down that the harbor is &quot; wall-towall boats.&quot; The Mannheim stops of its own accord , fortunate ly before we are part of the fleet, but we manage to get it fired up again and creep to our berth, outboard of Danmark. Another word about theengine room. Gaze/a leaks, and our pumping capacity is limited. When the water rises to the SEA HISTORY 84, SPRING 1998