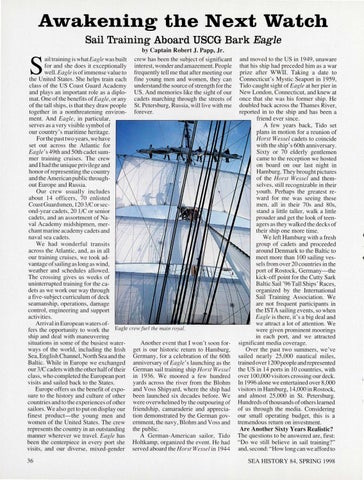 AlMakening the Next Watch Sail Training Aboard USCG Bark Eagle by Captain Robert J. Papp, Jr. ail training is what Eagle was built crew has been the subject of significant and moved to the US in 1949, unaware for and she does it exceptionally interest, wonder and amazement. People that his ship had preceded him as a war well. Eagle is ofimmense value to frequently tell me that after meeting our prize after WWII. Taking a date to the United States. She helps train each fine young men and women, they can Connecticut &#39;s Mystic Seaport in 1959, class of the US Coast Guard Academy understand the source of strength for the Tido caught sight of Eagle at her pier in ew London, Connecti cut, and knew at and plays an important role as a diplo- US. And memories like the sight of our mat. One of the benefits of Eagle, or any cadets marching through the streets of once that she was his former ship. He of the tall ships, is that they draw people St. Petersburg, Russia, will live with me doubled back across the Thames River, together in a nonthreatening environ- forever. reported in to the ship and has been a ment. And Eagle, in particular, friend ever since. serves as a very visible symbol of A few years back, Tido set plans in motion for a reunion of our country&#39;s maritime heritage. For the pasttwo years, we have Horst Wesse l cadets to coincide set out across the Atlantic for with the ship &#39;s 60th anniversary. Eagle&#39;s 49th and 50th cadet sumSixty or 70 elderly gentlemen mer training cruises. The crew came to the reception we hosted and I had the unique pri vilege and on board on our last night in honor of representing the country Hamburg. They brought pictures of the Horst Wessel and themand the Ameri can public throughout Europe and Russ ia. selves , still recognizable in their Our crew usuall y includes youth . Perhaps the greatest reabout 14 officers, 70 enlisted ward fo r me was seeing these men, all in their 70s and 80s, CoastGuardsmen, 120 3/Cor second-year cadets, 20 J /C or senior stand a little taller, walk a little cadets, and an assortment of Napro uder and get the look of teenagers as they walked the decks of va l Academy midshipmen, merchant marine academy cadets and their ship one more time. naval sea cadets. We left Hamburg with a fresh We had wonderful trans its group of cadets and proceeded across the Atlantic, and , as in all around Denmark to the Baltic to our training cruises, we took admeet more than 100 sa iling vesvantage of sailing as long as wind , sels from over 20 countries in the weather and schedules allowed. port of Rostock, Germany-the The crossing gives us weeks of kick-off point for the Cutty Sark uninterrupted training for the caBalti c Sail &#39;96 Tall Ships&#39; Races, dets as we work our way through organized by the Internati onal Sail Training Association. We a five-subject curriculum of deck seamanship, operations, damage are not frequent participants in the IST A sailing events, so when control, engineering and support acti vities. Eagle is there, it &#39;s a big deal and AJTival in European waters ofwe attract a Jot of attention. We fe rs the opportunity to work the Eagle crew furl the main royal. were given prominent moorings ship and deal with maneuvering in each port, and we attracted situ ations in some of the busiest waterAnother event that I won&#39; t soon for- significant media coverage. Over the past two summers, we &#39; ve ways of the world, including the Iri sh get is our historic return to Hamburg, Sea, English Channel, North Sea and the Germany, for a celebration of the 60th sailed nearly 25,000 nauti cal miles, Baltic. While in Europe we exchanged anniversary of Eagle&#39;s launching as the trained over 1200 people and represented our 3/C cadets with the other half of their German sai l training ship Horst Wessel the US in 14 ports in 10 countries, with class , who completed the European port in 1936. We moored a few hundred over 100,000 visitors crossing our deck. visits and sa iled back to the States. yards across the river fro m the Blohm In 1996 alone we entertained over 8,000 Europe offers us the benefit of expo- and Voss Shipyard, where the ship had visitors in Hamburg, 14,000 in Rostock, sure to the history and culture of other been launched six decades before. We and almost 25,000 in St. Petersburg. countries and to the experiences of other were overwhelmed by the outpouring of Hundreds of thousands ofothers learned sailors. We also get to put on display our friendship, camaraderie and apprecia- of us through the media. Considering finest product- the yo ung men and tion demonstrated by the German gov- our small operating budget, this is a women of the United States. The crew ernment, the navy, Blohm and Voss and tremendous return on investment. represents the country in an outstanding the public. Are Another Sixty Years Realistic? manner wherever we travel. Eagle has A German-Am eri can sailor, Tido The questions to be answered are, first: been the centerpiece in every port she Holtkamp, organized the event. He had &quot;Do we still believe in sail training?&quot; visits, and our di verse, mixed-gender served aboard the Horst Wessel in 1944 and, second: &quot;How long can we afford to