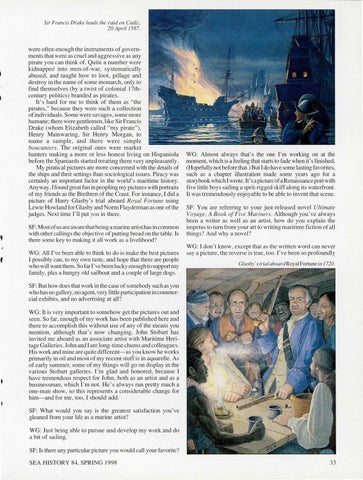 were often enough the instrume nts of governments that were as cruel and aggressive as any pirate you can think of. Quite a number were kidnapped into men-of-war, systemati ca ll y abused , and taught how to loot, pillage and destroy in the name of some monarch, only to find themselves (by a twist of colonial 17thcentury politics) branded as pirates. It&#39;s hard for me to think of them as &quot;the pirates,&quot; becau se they were such a collection of individuals. Some were savages, some more humane; there were gentlemen, like Sir Francis Drake (whom Elizabeth called &quot; my pirate&quot;), Henry Mainwaring, Sir Henry Morgan, to name a sample, and the re were s impl e boucaniers. The original ones were market hunters making a more or less honest living on Hispaniola before the Spaniards started treating them very unpleasantly. My piratical pictures are more concerned with the details of the ships and their settings than sociological issues. Piracy was certainly an important factor in the world &#39;s maritime history . Anyway , I found great fun in peopling my pictures with portraits of my friends as the Brethren of the Coast. For instance, I did a picture of Hairy Glasby&#39;s trial aboard Royal Fortune using Lewie Howland for Glasby and Norm Flayde1man as one of the judges. Next time I&#39;ll put you in there. SF: Mos tofus are awai路e that being a marine artist has in common with other callings the objective of putting bread on the table. Is there some key to making it all work as a livelihood?

WG: All I&#39;ve been able to think to do is make the best pictures I possibly can, to my own taste, and hope that there ai路e people who will want them. So far I&#39;ve been lucky enough to support my family , plus a hungry old sailboat and a couple of large dogs .

WG: Almost always that&#39;s the one I&#39;m working on at the moment, which is a feeling that staits to fade when it&#39;s finished. (Hopefully not before that.) But I do have some lasting favorites, such as a chapter illustration made some yeai路s ago for a storybook which I wrote. It&#39;s a picture of a Renaissance port with five little boys sailing a sprit-rigged skiff along its waterfront. It was tremendously enjoyable to be able to invent that scene. SF: You are referring to your just-released novel Ultimate Voyage , A Book of Five Mariners. Although you &#39;ve always been a writer as well as an artist, how do you explain the impetu s to turn from your art to writing maritime fiction of all things? And why a novel? WG : I don &#39; t know , except that as the written word can never say a picture, the reverse is true, too. I&#39;ve been so profoundly Glasby&#39; s trial aboard Roya l Fortune in 1720.

SF: But how does that work in the case of somebody such as you who has no gallery, no agent, very little participation in commercial exhibits, and no advertising at all? WG: It is very important to somehow get the pictures out and seen. So far, enough of my work has been published here and there to accomplish this without use of any of the means you mention , although that&#39;s now changing. John Stobart has invited me aboard as an associate artist with Maritime Heri tage Galleries. John and I are long-time chums and colleagues. His work and mine are quite different- as you know he works primaril y in oil and most of my recent stuff is in aquarelle. As of eai路ly summer, some of my things will go on display in the various Stobai-r galleries. I&#39;m glad and honored, because I have tremendous respect for John , both as an artist and as a businessman, which I&#39;m not. He&#39;s always run pretty much a one-man show, so this represents a considerable change for him-and for me, too , I should add. SF: What would you say is the greatest satisfaction you&#39;ve gleaned from your life as a marine artist? WG: Just being able to pursue and develop my work and do a bit of sai ling. SF: Is there any particular picture you would call your favorite? SEA HISTORY 84, SPRING 1998