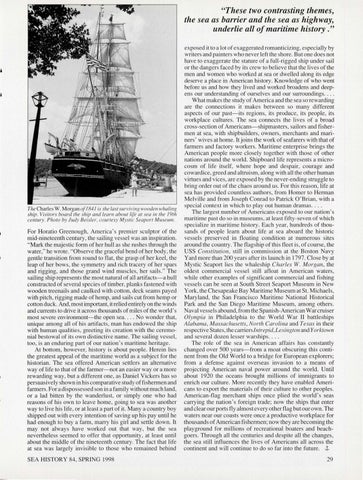 &quot;These two contrasting themes, the sea as barrier and the sea as highway, underlie all of maritime history . &quot;

The Charles W. Morgan of J84 J is the last surviving wooden whaling ship. Vis itors board the ship and learn about life at sea in the 19th century. Photo by Judy S eisler, courtesy Mystic Seaport Museum.

For Horatio Greenough, America &#39;s premier sculptor of the mid-nineteenth century, the sa iling vessel was an inspiration. &quot;Mark the majestic form of her hull as she rushes through the water,&quot; he wrote. &quot;Observe the graceful bend of her body, the gentle transition from round to flat, the grasp of her keel, the leap of her bows, the symmetry and rich tracery of her spars and rigging, and those grand wind muscles, her sails.&quot; The sailing ship represents the most natural of all artifacts-a hull constructed of several species of timber, planks fastened with wooden treenails and caulked with cotton, deck seams payed with pitch, rigging made of hemp , and sa il s cut from hemp or cotton duck . And, most impo1tant, it relied entirely on the winds and currents to drive it across thousands of miles of the world&#39;s most severe environment- the open sea .... No wonder that, unique among all of his artifacts , man has endowed the ship with human qualities, greeting its creation with the ceremonial bestowal of its own distinctive name. The sailing vessel , too, is an enduring part of our nation &#39;s maritime heritage. At bottom , however, hi story is about people. Herein li es the greatest appeal of the maritime world as a subject for the historian . The sea offered American settlers an alternative way of life to that of the faimer-not an easier way or a more rewarding way, but a different one, as Daniel Vickers has so persuasively shown in his compai路ative study of fishermen and farmers. For a dispossessed son in a family without much land, or a lad bitten by the wanderlust, or simply one who had reasons of his own to leave home, going to sea was another way to live his life, or at least a part of it. Many a country boy shipped out with every intention of saving up his pay until he had enough to buy a farm , ma1Ty his girl and settle down. It may not always have worked out that way, but the sea nevertheless seemed to offer that opportunity, at least until about the middle of the nineteenth century . The fact that life at sea was largely invisible to those who remained behind SEA HISTORY 84, SPRING 1998

exposed it to a lot of exaggerated romanticizing, especially by writers and painters who never left the shore. But one does not have to exaggerate the stature of a full-rigged ship under sail or the dangers faced by its crew to believe that the lives of the men and women who worked at sea or dwelled along its edge deserve a place in American history. Knowledge of who went before us and how they lived and worked broadens and deepen our understanding of ourselves and our surroundings .... What makes the study of America and the sea so rewarding are the connection s it makes between so many different aspects of our past- its regions, its produce, its people, its workplace cultures. The sea connects the lives of a broad cross-section of Americans-shipmasters, sailors and fi shermen at sea, with shipbuilders, owners, merchants and mariners&#39; wives at home. It joins the work of seafarers with that of farmers and factory workers. Mai路itime enterprise brings the American people more closely together with those of other nation s around the world. Shipboard life represents a microcosm of life itself, where hope and despair, courage and cowai路dice, greed and altruism, along with all the other human virtues and vices , are exposed by the never-ending struggle to bring order out of the chaos around us. For this reason, life at sea has provided countless authors, from Homer to Herman Melville and from Joseph Conrad to Patrick O &#39;Brian, with a special context in which to play out human dramas ... . The largest number of Americans exposed to our nation &#39;s maritime past do so in museums, at least fifty-seven of which specialize in maritime history. Each year, hundreds of thousands of people learn about life at sea aboard the historic vessels preserved in floating condition at numerou s sites aro und the country. The flagship of this fleet is, of course, the USS Constitution, still in commission at the Boston Navy Yard more than 200 years after its launch in 1797. Close by at Mystic Seaport lies the whaleship Charles W. Morgan, the oldest commercial vessel still afloat in American waters, while other examples of significant commercial and fishing vessels can be seen at South Street Seaport Museum in New York, the Chesapeake Bay Maritime Museum at St. Michaels, Maryland , the San Francisco Maritime National Historical Park and the San Diego Maritime Museum , among others. Naval vessels abound, from the Spanish-American War cruiser Olympia in Philadelphia to the World War II battleships Alabama, Massachusetts, North Carolina and Texas in their respective States, the carriers Intrepid, Lexington and Yorktown and several dozen lesser warships .... The role of the sea in American affairs has constantly changed over 500 years-from a moat obscuring this continent from the Old World to a bridge for European explorers; from a defense against overseas invasion to a means of projecting American naval power around the world. Until about 1920 the oceans brought millions of immigrants to enrich our culture. More recently they have enabled Americans to export the material s of their culture to other peoples. American-flag merchant ships once plied the world &#39;s seas carrying the nation &#39;s foreign trade; now the ships that enter and clear our ports fl y almost every other flag butourown. The waters near our coasts were once a productive workplace for thousands of American fishermen ; now they are becoming the playground for millions of recreational boaters and beachgoers. Through all the centuries and despite all the changes, the sea still influences the lives of Americans all across the continent and will continue to do so fai路 into the future. ,t 29