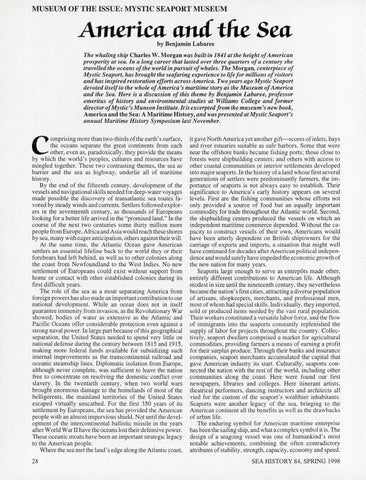 The whaling ship Charles W. Morgan was built in 1841 at the height ofAmerican prosperity at sea. Jn a long career that lasted over three quarters of a century she travelled the oceans of the world in pursuit of whales. The Morgan, centerpiece of Mystic Seaport, has brought the seafaring experience to life for millions of visitors and has inspired restoration efforts across America. Two years ago Mystic Seaport devoted itself to the whole of America's maritime story as the Museum of America and the Sea. Here is a discussion of this theme by Benjamin Labaree, professor emeritus of history and environmental studies at Williams College and former director ofMystic's Munson Institute. It is excerpted from the museum's new book, America and the Sea: A Maritime History, and was presented at Mystic Seaport's annual Maritime History Symposium last November.

omprising more than two-thirds of the earth's surface, the oceans separate the great continents from each other, even as, paradoxically, they provide the means by which the world's peoples, cultures and resources have mingled together. These two contrasting themes, the sea as barrier and the sea as highway, underlie all of maritime history. By the end of the fifteenth century, development of the vessels and navigational skills needed for deep-water voyages made possible the discovery of transatlantic sea routes favored by steady winds and currents. Settlers followed explorers in the seventeenth century, as thousands of Europeans looking for a better life arrived in the "promised land." In the course of the next two centuries some thirty million more people from Europe, Africa and Asia would reach these shores by sea, many with eager anticipation, others against their will. At the same time, the Atlantic Ocean gave American settlers an essential lifeline back to the world they or their forebears had left behind, as well as to other colonies along the coast from Newfoundland to the West Indies. No new settlement of Europeans could exist without support from home or contact with other established colonies during its first difficult years. The role of the sea as a moat separating America from foreign powers has also made an important contribution to our national development. While an ocean does not in itself guarantee immunity from invasion, as the Revolutionary War showed, bodies of water as extensive as the Atlantic and Pacific Oceans offer considerable protection even against a strong naval power. In large part because of this geographical separation, the United States needed to spend very little on national defense during the century between 1815 and 1915, making more federal funds available for subsidizing such internal improvements as the transcontinental railroad and oceanic steamship lines. Diplomatic isolation from Europe, although never complete, was sufficient to leave the nation free to concentrate on resolving the domestic conflict over slavery. In the twentieth century, when two world wars brought enormous damage to the homelands of most of the belligerents, the mainland territories of the United States escaped virtually unscathed. For the first 350 years of its settlement by Europeans, the sea has provided the American people with an alm ost impervious shield. Not until the development of the intercontinental ballistic missile in the years after World War II have the oceans lost their defensive power. These oceanic moats have been an important strategic legacy to the American people. Where the sea met the land's edge along the Atlantic coast, 28

it gave North America yet another gift-scores of inlets, bays and river estuaries suitable as safe harbors. Some that were near the offshore banks became fishing ports; those close to forests were shipbuilding centers; and others with access to other coastal communities or interior settlements developed into major seaports. In the history of a land whose first several generations of settlers were predominantly farmers, the importance of seaports is not always easy to establish. Their significance to America's early history appears on several levels. First are the fishing communities whose efforts not only provided a source of food but an equally important commodity for trade throughout the Atlantic world. Second, the shipbuilding centers produced the vessels on which an independent maritime commerce depended. Without the capacity to construct vessels of their own, Americans would have been utterly dependent on British shipowners for the carriage of exports and imports , a situation that might well have continued for decades after American political independence and would surely have impeded the economic growth of the new nation for many years. Seaports large enough to serve as entrep6ts made other, entirely different contributions to American life. Although modest in size until the nineteenth century, they nevertheless became the nation's first cities, attracting a diverse population of artisans, shopkeepers, merchants, and professional men, most of whom had special ski lls. Individually, they imported, sold or produced items needed by the vast rural population. Their workers constituted a versatile labor force, and the flow of immigrants into the seaports constantly replenished the suppl y of labor for projects throughout the country. Collectively, seaport dwellers comprised a market for agricultural commodities, providing farmers a means of earning a profit for their surplus produce. Through their banks and insurance companies, seaport merchants accumulated the capital that gave American industry its start. Culturally, seaports connected the nation with the rest of the world, including other communities along the coast. Here were fo und our first newspapers, libraries and colleges. Here itinerant artists, theatrical performers, dancing instructors and architects all vied for the custom of the seaport's wealthier inhabitants. Seaports were another legacy of the sea, bringing to the American continent all the benefits as well as the drawbacks of urban life. The enduring symbol for American maritime enterprise has been the sailing ship, and what a complex symbol it is. The design of a seagoing vessel was one of humankind's most notable achievements, combining the often contradictory attributes of stability, strength, capacity, economy and speed. SEA HISTORY 84, SPRING 1998