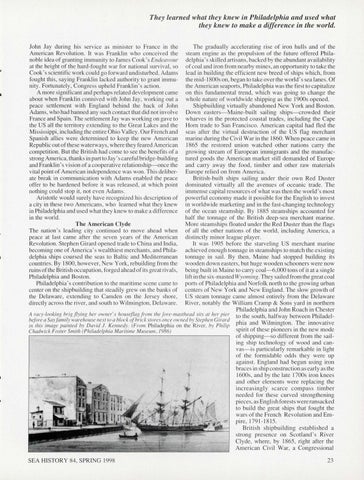 They learned what they knew in Philadelphia and used what they knew to make a difference in the world. John Jay during his service as minister to France in the American Revolution . It was Franklin who conceived the noble idea of granting immunity to James Cook&#39;s Endeavour at the height of the hard-fo ught war fo r national su rvival, so Cook &#39; s scientific work could go forward undi sturbed. Adams fought thi s, say ing Franklin lacked authority to grant immunity. Fortunately, Congress upheld Franklin&#39;s action. A more significant and perhaps related development came about when Franklin conn ived with John Jay , working out a peace settlement with England behind the back of John Adams, who had banned any such contact that did not involve France and Spain. The settlement Jay was working on gave to the US all the territory extending to the Great Lakes and the Mi ssissippi , including the entire Ohio Valley. Our French and Spanish allies were determined to keep the new American Republic out of these waterways, where they feared American competition. But the British had come to see the benefits of a strong America, thanks in part to Jay &#39; s careful bridge-building and Franklin &#39; s vision of a cooperative relationship-once the vital point of American independence was won. Thi s deliberate break in communi cation with Adams enabled the peace offer to be hardened before it was released, at which point nothing could stop it, not even Adams. Aristotle would surely have recogn ized his description of a city in these two Americans, who learned what they knew in Philadelphi a and used what they knew to make a difference in the world . The American Clyde The nation&#39; s lead ing city continued to move ahead when peace at last came after the seven years of the American Revolution . Stephen Girard opened trade to China and India, becoming one of America &#39; s wealthiest merchants, and Phil adelphia ships coursed the seas to Baltic and Mediterranean countries. By 1800, however, New York, rebuilding fro m the ruins of the British occupation, forged ahead of its great rivals, Philadelphia and Boston. Philadelphia &#39; s contribution to the maritime scene came to center on the shipbuilding that stead il y grew on the banks of the Delaware, extending to Camden on the Jersey shore, directl y across the river, and south to Wilmington , Delaware.

The gradually accelerating ri se of iron hulls and of the steam engine as the propulsion of the future offered Philadelphia&#39;s skilled artisans, backed by the abundant avai la bi lity of coal and iron from nearby mines, an opportunity to take the lead in building the effic ient new breed of ships which, from the mid-l 800s on , began to take over the world&#39;s sea lanes. Of the American seaports, Philadelphia was the first to capitali ze on thi s fundamental trend, which was go ing to change the who le nature of worldwide shipping as the 1900s opened. Sh ipbuilding virtually abandoned New York and Boston . Down easters-Maine-built sailing ships-crowded their wharves in the protected coastal trades , including the Cape Horn trade to San Francisco. American capital had fled the seas after the virtual destruction of the US flag merchant marine during the Civil War in the 1860. When peace came in 1865 the restored union watched other nations carry the growing stream of European immigrants and the manufactured goods the American market still demanded of Europe and carry away the food , timber and other raw material s Europe relied on from America. British-built ships sailing under the ir own Red Duster dominated virtually all the avenues of oceanic trade. The immense capita l resources of what was then the world&#39; s most powerfu l economy made it poss ible for the English to invest in world wide marketing and in the fast-changing technology of the ocean steamship . By 1885 steamships accounted for half the tonnage of the British deep-sea merchant marine. More steamships floated under the Red Duster than the fl ags of all the other nations of the world , including America, a distinctly minor league player. It was 1905 before the starveling US merchant marine achi eved enough tonnage in steamships to match the ex isting tonnage in sa il. By then, Maine had stopped building its wooden down easters, but huge wooden schooners were now being built in Maine to carry coal-6,000 tons of it at a single lift in the six-masted Wyoming. They sailed from the great coal ports of Phil adelphia and Norfolk north to the growing urban centers of New York and New England. The slow growth of US steam tonnage came almost entirely from the De laware Ri ver, notably the William Cramp &amp; Sons yard in northern Phil adelphia and John Roach in Chester A racy- looking brig f lying her owner&#39; s housejlag fr om the fore-ma sthead sits at her pier to the south , halfway between Philadelbefor e a Say fami ly warehouse next to a block of brick stores once owned by Stephen Girard in this image painted by Da vid J. Kennedy. (From Philadephi a on the Rive r, by Philip phi a and Wilmington . The innovative spirit of these pioneers in the new mode Chadwick Foster Smith (Philadelphia Maritim e Museum, 1986) of shipping-so different from the sailing ship technology of wood and canvas- is particularly remarkable in light of the formidable odds they were up against. England had begun using iron braces in ship construction as early as the 1600s , and by the late 1700s iron knees and other elements were replacing the increasingly scarce compass timber needed for these curved strengthening pieces, as English forests were ransacked to build the great ships that fought the wars of the French Revolution and Empire, 1791-1815. British shipbuilding esta bli shed a strong presence on Scotland &#39; s River Clyde, where, by 1865, ri ght after the American Civil War, a Congressional