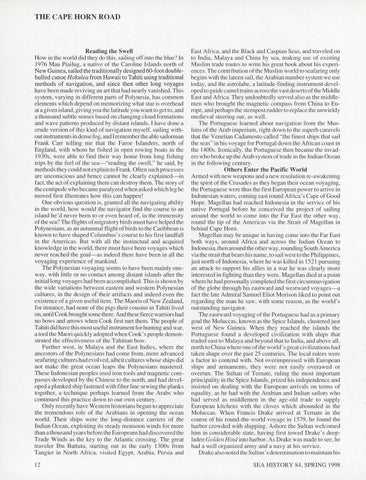 Reading the Swell How in the world did they do this, sailing off into the blue? In 1976 Mau Piailug, a native of the Caroline Islands north of New Guinea, sailed the traditionally designed 60-footdoublehulled canoe Hokulea from Hawaii to Tahiti using traditional methods of navigation, and since then other long voyages have been made reviving an art that had nearly vanished. This system, varying in different parts of Polynesia, has common elements which depend on memorizing what star is overhead at a given island, giving you the latitude you want to get to, and a thousand subtle senses based on changing cloud formations and wave patterns produced by distant islands. I have done a crude version of this kind of navigation myself, sailing without instruments in dense fog, andlrememberthe able sailorman Frank Carr telling me that the Faroe Islanders , north of England, with whom he fished in open rowing boats in the 1930s, were able to find their way home from long fishing trips by the feel of the sea-&quot;reading the swell,&quot; he said, by methods they could not explain to Frank. Often such processes are unconscious and hence cannot be clearly explained-in fact, the act of explaining them can destroy them. The story of the centipede who became paralyzed when asked which leg he moved first illustrates how this can happen! One obvious question is, granted all the navigating ability in the world, how would the navigator find the course to an island he&#39;d never been to or even heard of, in the immensity of the sea? The flights of migratory birds must have helped the Polynesians, as an autumnal flight of birds to the Caribbean is known to have shaped Columbus &#39; s course to his first landfall in the Americas. But with all the instinctual and acquired knowledge in the world, there must have been voyages which never reached the goal-as indeed there have been in all the voyaging experience of mankind. The Polynesian voyaging seems to have been mainly oneway, with little or no contact among distant islands after the initial long voyages had been accomplished. This is shown by the wide variations between eastern and western Polynesian cultures, in the design of their artifacts and indeed even the existence of a given useful item. The Maoris of New Zealand, for instance, had none of the pigs their cousins in Tah iti lived on, until Cook brought some there. And these fierce warriors had no bows and arrows when Cook first met them. The people of Tahiti did have this most useful instrument for hunting and war, a tool the Maori quickly adopted when Cook&#39;s people demonstrated the effectiveness of the Tahitian bow. Further west, in Malaya and the East Indies, where the ancestors of the Polynesians had come from, more advanced seafaring cultures had evolved, albeit cultures whose ships did not make the great ocean leaps the Polynesians mastered. These Indonesian peoples used iron tools and magnetic compasses developed by the Chinese to the north, and had developed a planked ship fastened with fiber line sewing the planks together, a technique perhaps learned from the Arabs who continued this practice down to our own century. Only recently have Western historians begun to appreciate the tremendous role of the Arabians in opening the ocean world. Their ships were the long-distance carriers of the Indian Ocean, exploiting its steady monsoon winds for more than a thousand years before the Europeans had discovered the Trade Winds as the key to the Atlantic crossing. The great traveler Ibn Battuta, starting out in the early 1300s from Tangier in North Africa, visited Egypt, Arabia, Persia and 12

East Africa, and the Black and Caspian Seas, and traveled on to India, Malaya and China by sea, making use of existing Muslim trade routes to write his great book about his experiences. The contribution of the Muslim world to seafaring only begins with the lateen sail, the Arabian number system we use today, and the astrolabe, a latitude-finding instrument developed to guide camel trains across the vast deserts of the Middle East and Africa. They undoubtedly served also as the middlemen who brought the magnetic compass from China to Europe, and perhaps the sternpost rudder to replace the unwieldy medieval steering oar, as well. The Portuguese learned about navigation from the Muslims of the Arab imperium, right down to the superb caravels that the Venetian Cadamosto called &quot;the finest ships that sail the seas&quot; in his voyage for Portugal down the African coast in the 1400s. Ironically, the Portuguese then became the invaders who broke up the Arab system of trade in the Indian Ocean in the following century. Others Enter the Pacific World Armed with new weapons and a new resolution re-awakening the spirit of the Crusades as they began their ocean voyaging, the Portuguese were thus the first European power to arrive in Indonesian waters, coming east round Africa&#39;s Cape of Good Hope. Magellan had reached Indonesia in the service of his native Portugal before he conceived the project of sailing around the world to come into the Far East the other way, round the tip of the Americas via the Strait of Magellan in behind Cape Horn. Magellan may be unique in having come into the Far East both ways, around Africa and across the Indian Ocean to Indonesia, then around the other way, rounding South America via the strait that bears his name, to sail west to the Philippines, just north ofindonesia, where he was killed in 1521 pursuing an attack to support his allies in a war he was clearly more interested in fighting than they were. Magellan died at a point where he had personally completed the first circumnavigation of the globe through his eastward and westward voyages-a fact the late Admiral Samuel Eliot Morison liked to point out regarding the man he saw, with some reason, as the world&#39;s outstanding navigator. The eastward voyaging of the Portuguese had as a primary goal the Moluccas, known as the Spice Islands, clustered just west of New Guinea. When they reached the islands the Portuguese found a developed civilization with ships that traded east to Malaya and beyond that to India, and above all, north to China where one of the world&#39;s great civilizations had taken shape over the past 25 centuries. The local rulers were a factor to contend with. Not overimpressed with European ships and armaments, they were not easily overawed or overrun. The Sultan of Ternate, ruling the most important principality in the Spice Islands, prized his independence and insisted on dealing with the European arrivals on terms of equality, as he had with the Arabian and Indian sailors who had served as middlemen in the age-old trade to supply European kitchens with the cloves which abounded in the Moluccas. When Francis Drake arrived at Ternate in the course of his round-the-world voyage in 1579, he found the harbor crowded with shipping. Ashore the Sultan welcomed him in considerable state, having first towed Drake&#39;s deepladen Golden Hind into harbor. As Drake was made to see, he had a well organized army and a navy at his service. Drake also noted the Sultan &#39; s determination to maintain his SEA HISTORY 84, SPRING 1998