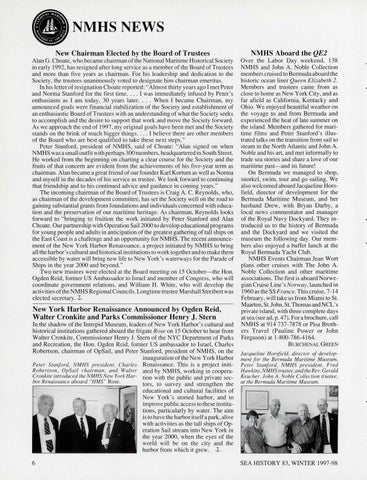 .NMHSNEWS New Chairman Elected by the Board of Trustees

NMHS Aboard the QE2

Alan G. Choate, who became chairman of the National Maritime Historical Society in early 1992, has resigned after long service as a member of the Board of Trustees and more than five years as chairman. For his leadership and dedication to the Society, the trustees unanimously voted to designate him chairman emeritus. In his letter of resignation Choate reported: &quot;Almost thirty years ago I met Peter and Norma Stanford for the first time .... I was immediately infused by Peter&#39;s enthusiasm as I am today, 30 years later. . .. When I became Chairman, my announced goals were financial stabilization of the Society and establishment of an enthusiastic Board of Trustees with an understanding of what the Society seeks to accomplish and the desire to support that work and move the Society forward. As we approach the end of 1997, my original goals have been met and the Society stands on the brink of much bigger things .... I believe there are other members of the Board who are best qualified to take these next steps.&quot; Peter Stanford, president of NMHS , said of Choate: &quot;Alan signed on when NMHS was a small outfit with perhaps 300 members, headquartered in South Street. He worked from the beginning on charting a clear course for the Society and the fruits of that concern are evident from the achievements of his five-year term as chairman. Alan became a great friend of our founder Karl Kortum as well as Norma and myself in the decades of his service as trustee. We look forward to continuing that friendship and to his continued advice and guidance in coming years .&quot; The incoming chairman of the Board of Trustees is Craig A. C. Reynolds , who, as chairman of the development committee, has set the Society well on the road to gaining substantial grants from foundations and individuals concerned with education and the preservation of our maritime heritage. As chairman, Reynolds looks forward to &quot;bringing to fruition the work initiated by Peter Stanford and Alan Choate. Our partnership with Operation Sail 2000 to develop educational programs for young people and adults in anticipation of the greatest gathering of tall ships on the East Coast is a challenge and an opportunity for NMHS. The recent announcement of the New York Harbor Renaissance, a project initiated by NMHS to bring all the harbor&#39;s cultural and hi storical institutions to work together and to make them accessible by water will bring new life to New York&#39;s waterways for the Parade of Ships in the year 2000 and beyond.&quot; Two new trustees were elected at the Board meeting on 15 October-the Hon. Ogden Reid , former US Ambassador to Israel and member of Congress, who will coordinate government relations, and William H. White, who will develop the activities oftheNMHS Regional Councils. Longtime trustee Marshall Streibert was elected secretary. J,

Over the Labor Day weekend, 138 NMHS and John A. Noble Collection members cruised to Bermuda aboard the historic ocean liner Queen Elizabeth 2. Members and trustees came from as close to home as New York City, and as far afield as California, Kentucky and Ohio. We enjoyed beautiful weather on the voyage to and from Bermuda and experienced the heat of late summer on the island. Members gathered for maritime films and Peter Stanford&#39;s illustrated talks on the transition from sail to steam in the North Atlantic and John A. Noble and his art, and met informally to trade sea stories and share a love of our maritime past-and its future! On Bermuda we managed to shop, snorkel, swim, tour and go sailing. We also welcomed aboard Jacqueline Horsfield , director of development for the Bermuda Maritime Museum, and her husband Drew, with Bryan Darby, a local news commentator and manager of the Royal Navy Dockyard. They introduced us to the history of Bermuda and the Dockyard and we visited the museum the following day . Our members also enjoyed a buffet lunch at the Royal Bermuda Yacht Club. NMHS Events Chairman Jean Wort plans other cruises with The John A. Noble Collection and other maritime associations. The first is aboard Norwegian Cruise Line &#39;s Norway, launched in 1960 as the SS France. This cruise, 7-14 February, will take us from Miami to St. Maarten,St.John, St. ThomasandNCL&#39;s private island, with three complete days at sea (see ad, p. 4 7). For a brochure, call NMHS at 914 737-7878 or Pisa Brothers Travel (Pauline Power or John Ferguson) at 1-800-786-4164.

New York Harbor Renaissance Announced by Ogden Reid, Walter Cronkite and Parks Commissioner Henry J. Stern In the shadow of the Intrepid Museum, leaders of New York Harbor&#39;s cultural and historical institutions gathered aboard the frigate Rose on 15 October to hear from Walter Cronkite, Commissioner Henry J. Stem of the NYC Department of Parks and Recreation , the Hon. Ogden Reid, former US ambassador to Israel, Charles Robertson , chairman of OpSail, and Peter Stanford, president of NMHS, on the inauguration of the New York Harbor Peter Stanford, NMHS president, Charles Renaissance. This is a project initiRobertson, OpSail chairman , and Walter ated by NMHS, working in cooperaCronkite introduced the NMHS New York Har- tion with the public and private secbor Renaissance aboard &quot;HMS&quot; Rose. tors, to survey and strengthen the educational and cultural fac ilities of New York&#39;s storied harbor, and to improve public access to these institutions, particularly by water. The aim is to have the harbor itself a park, alive with activities as the tall ships of Operation Sail stream into New York in the year 2000, when the eyes of the world will be on the city and the harbor from which it grew. J,