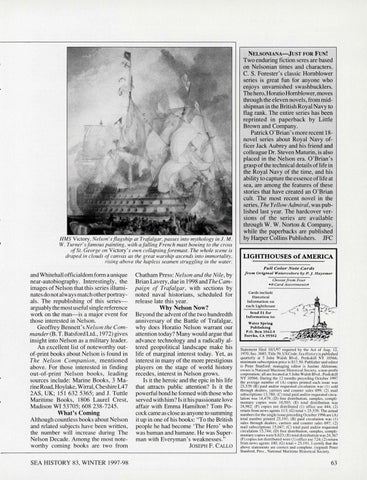 HMS Victory, Nelson&#39;s fla gship at Trafalgar, passes into mythology in J.M . W. Turner&#39; s famous painting, with a fallin g French mast bowing to the cross of St . George on Victory&#39;s own collapsing foremast . The whole scene is draped in clouds of canvas as the great warship ascends into immortality, rising above the hapless seamen struggling in the water.

Two enduring fiction seres are based on Nelsonian times and characters. C. S. Forester&#39;s classic Hornblower series is great fun for anyone who enjoys unvarnished swashbucklers. The hero, Horatio Hornblower, moves through the eleven novels, from midshipman in the British Royal Navy to flag rank. The entire series has been reprinted in paperback by Little Brown and Company. PatrickO &#39;Brian&#39;smorerecent 18novel series about Royal Navy officer Jack Aubrey and his friend and colleague Dr. Steven Maturin, is also placed in the Nelson era. O&#39;Brian&#39;s grasp of the technical details oflife in the Royal Navy of the time, and his ability to capture the essence oflife at sea, are among the features of these stories that have created an O&#39;Brian cult. The most recent novel in the series, The Yellow Admiral, was published last year. The hardcover versions of the series are available through W.W. Norton &amp; Company, while the paperbacks are published by Harper Collins Publishers. JFC

and Whitehall officialdom form a unique near-autobiography. Interestingly, the images of Nelson that this series illuminates do not always match other portrayals. The republishing of this seriesarguably the most usefu l single reference work on the man-is a major event for those interested in Nelson. Geoffrey Bennett&#39; s Nelson the Commander(B. T. BatsfordLtd. , 1972) gives insight into Nelson as a military leader. An excellent list of noteworthy outof-print books about Nelson is found in The Nelson Companion, mentioned above. For those interested in finding out-of-print Nelson books , leading sources include: Marine Books, 3 Marine Road, Hoylake, Wirral, Cheshire1A7 2AS, UK; 151 632 5365; and J. Tuttle Maritime Books, 1806 Laurel Crest, Madison WI 53705; 608 238-7245 . What&#39;s Coming Although countless books about Nelson and related subjects have been written , the number will increase during The Nelson Decade. Among the most noteworthy coming books are two from SEA HISTORY 83, WINTER 1997-98

Chatham Press: Nelson and the Nile, by Brian Lavery, due in 1998 and The Campaign of Trafalgar, with sections by noted naval historians , scheduled for release late this year. Why Nelson Now? Beyond the advent of the two hundredth anniversary of the Battle of Trafalgar, why does Horatio Nelson warrant our attention today? Many would argue that advance technology and a radically altered geopolitical landscape make his life of marginal interest today . Yet, as interest in many of the more prestigious players on the stage of world history recedes, interest in Nelson grows. Is it the heroic and the epic in his life that attracts public attention? Is it the powerful bond he formed with those who served with him? Is it his passionate love affair with Emma Hamilton? Tom Pocock came as close as anyone to summing it up in one of hi s books: &quot;To the British people he had become &#39;The Hero &#39; who was human and humane. He was Superman with Everyman&#39;s weaknesses.&quot; JOSEPH