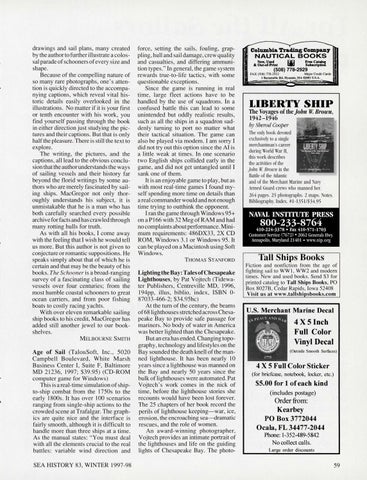 drawings and sail plans, many created by the author to further illustrate a co lossal parade of schooners of every size and shape. Because of the compelling nature of so many rare photographs, one &#39;s attention is quickly directed to the accompanying captions, which reveal vital historic details easily overlooked in the illustrations. No matter if it is your first or tenth encounter with his work, you find yourself passing through the book in either direction just studying the pictures and their captions. But that is only half the pleasure. There is still the text to explore. The writing, the pictures, and the captions, all lead to the obvious conclusion that the author understands the ways of sailing vessels and their history far beyond the florid writings by some authors who are merely fascinated by sailing ships. MacGregor not only thoroughly understands his subject, it is unmistakable that he is a man who has both carefully searched every possible archive for facts and has crawled through many rotting hulls for truth . As with all his books, I come away with the feeling that I wish he would tell us more. But this author is not given to conjecture or romantic suppositions. He speaks simply about that of which he is certain and that may be the beauty of his books. The Schooner is a broad-ranging survey of a fascinating class of sailing vessels over four centuries; from the most humble coastal schooners to great ocean carriers, and from poor fishing boats to costly racing yachts. With over eleven remarkable sailing ship books to his credit, MacGregor has added still another jewel to our bookshelves. MELBOURNE SMITH

Age of Sail (TalonSoft, Inc., 5020 Campbell Boulevard , White Marsh Business Center I, Suite F, Baltimore MD 21236, 1997; $39.95) (CD-ROM computer game for Windows) This is areal-time simulation of shipto-ship combat from the 1750s to the early 1800s. It has over 100 scenarios ranging from single-ship actions to the crowded scene at Trafalgar. The graphics are quite nice and the interface is fairly smooth, although it is diffic ult to handle more than three ships at a time. As the manual states: &quot;You must deal with all the elements crucial to the real battles: variable wind direction and SEA HISTORY 83, WINTER 1997-98

force, setting the sails, fouling, grappling, hull and sail damage, crew quality and casualties, and differing ammunition types.&quot; In general , the game system rewards true-to-life tactics, with some questionable exceptions. Since the game is running in real time, large fleet actions have to be handled by the use of squadrons. In a confused battle this can lead to some unintended but oddly realistic results, such as all the ships in a squadron suddenly turning to port no matter what their tactical situation. The game can also be played via modem. I am sorry I did not try out this option since the AI is a little weak at times. In one scenario two English ships collided early in the game, and did not get untangled until I sank one of them . It is an enjoyable game to play, but as with most real-time games I found myself spending more time on details than a real commander would and not enough time trying to outthink the opponent. I ran the game through Windows 95+ on aP166 with 32MegofRAMand had no complaints about performance. Minimum requirements: 486DX33, 2X CD ROM, Windows 3.1orWindows95. It can be played on a Macintosh using Soft Windows. THOMAS STANFORD

Lighting the Bay: Tales of Chesapeake Lighthouses, by Pat Yojtech (Tidewater Publishers , Centreville MD , 1996, l 94pp, illus, biblio, index, ISBN 087033-466-2; $34.951ic) At the turn of the century, the beams of 68 lighthouses stretched across Chesapeake Bay to provide safe passage for mariners. No body of water in America was better lighted than the Chesapeake. But an era has ended. Changing topography, technology and lifestyles on the Bay sounded the death knell of the manned li ghthouse. It has been nearly 10 years since a lighthouse was manned on the Bay and nearly 50 years since the bulk of li ghthouses were automated. Pat Yojtech&#39;s work comes in the nick of time, before the lighthouse stories she recounts would have been lost forever. The 25 chapters of her book record the perils of li ghthouse keeping-war, ice, erosion, the encroaching sea-dramatic rescues, and the role of women. An award-winning photographer, Yojtech provides an intimate portrait of the lighthouses and life on the guiding lights of Chesapeake Bay. The photo-

The Voyages of the john W. Brown,

1942-1946 by Sherod Cooper The only book devoted exclusively to a single merchantman&#39;s career during World War II, this work describes the activities of the john IV Brown in the Battle of the Atlantic and of the Merchant Marine and Navy Armed Guard crews who manned her. 264 pages. 25 photographs. 2 maps. Notes. Bibliography. lndex. #1-1351/$34.95