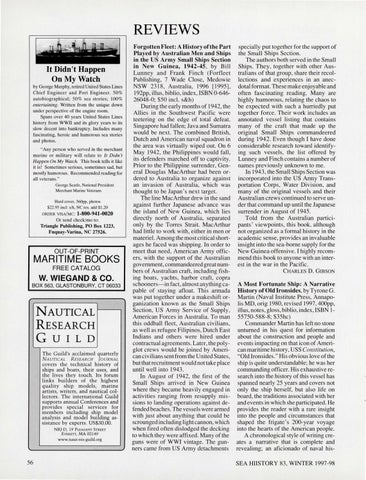 REVIEWS It Didn't Happen On My Watch by George Murphy, retired United States Lines Chief Eng in ee r and Port Engin eer. 50% autobi ographical ; 50% sea stories; 100% entertaining. Written from the unique down under perspective of the engine room. Spans over 40 years United States Lines history from WWII and its glory years to its slow decent into bankruptcy. Includes many fascinating, heroic and humorous sea stories and photos. "Any person who served in the merchant marine or military will rel ate to It Didn 't Happen On My Watch. This book tells it like it is! Sometimes serious, sometimes sad, but mostly humorous. Recommended reading fo r all veterans." George Searle, National President Merchant Marine Vetera ns Hard cover, 360pp, photos $22.95 incl : s/h, NC res. add $1.20 ORDER VISA/MC:

Forgotten Fleet: A History of the Part specially put together for the support of Played by Australian Men and Ships the Small Ships Section. The authors both served in the Small in the US Army Small Ships Section in New Guinea, 1942-45, by Bill Ships. They, together with other AusLunney and Frank Finch (Forfleet tralians of that group, share their recolPublishing, 7 Wade Close, Medowie lections and experiences in an anecNSW 231 8, Australia, 1996 (1995 ], dotal format. These make enjoyable and 192pp, illus, biblio, index , ISBN 0-646- often fas cinating reading. Many are 26048-0; $50 incl. s&h) highly humorous, relating the chaos tci During the earl y months of 1942, the be expected with such a hurriedl y put Allies in the Southwest Pacific were together force . Their work includes an teetering on the edge of total defeat. annotated vessel li sting that contains Singapore had fallen; Java and Sumatra many of the craft that made up the would be next. The combined British, ori ginal Small Ships commandeered Dutch and American naval squadron in during 1942. Even though I have done the area was virtually wiped out. On 6 considerable researc h toward identifyMay 1942, the Philippines would fall , ing such vessels, the list offered by its defenders marched off to captivity. Lunney and Finch contains a number of Prior to the Philippine surrender, Gen- names pre viously unknown to me. eral Douglas MacArthur had been orIn 1943, the Small Ships Section was dered to Australia to organize against incorporated into the US Army Transan invas ion of Australia, which was portation Corps, Water Division , and thought to be Japan's next target. many of the original vessel s and their The line MacArthur drew in the sand Australian crews continued to serve unagainst further Japanese advance was der that command up until the Japanese the island of New Guinea, which lies surrender in August of 1945. Told from the Australian particidirectly north of Australia, separated only by the Torres Strait. MacArthur pants' viewpoints, this book, although had little to work with , either in men or not organized as a formal hi story in the materiel . Among the most critical short- academic sense, provides an invaluable ages he faced was shipping. In order to insight into the sea-borne supply for the meet that need, American Arrny offic- New Guinea offensive. I highly recomers, with the support of the Australian mend thi s book to anyone with an intergovernment, commandeered great num- est in the war in the Pacific. bers of Au stralian craft, including fi shCHARLES D . GIBSON ing boats, yachts, harbor craft, copra schooners-in fact, almost anything ca- A Most Fortunate Ship: A Narrative pable of staying afloat. This arrnada History of Old Ironsides, by Tyrone G. was put together under a makeshift or- Martin (Naval Institute Press, Annapogani zation known as the Small Ships lis MD, orig 1980, revised 1997, 400pp, Section, US Arrny Service of Suppl y, illus, notes , gloss, biblio, index, ISBN 1American Forces in Australia. To man 55750-588-8; $35hc) this oddball fleet, Australian civi lians, Commander Martin has left no stone as well as refu gee Filipinos, Dutch East unturned in his quest fo r information Indians and others were hired under about the construction and people and contractual agreements . Later, the poly- events impacting on that icon of Ameri glot crews would be joined by Ameri- can maritime history, USS Constitution, can civilians sent from the United States, "Old Ironsides." His obvious love of the but that recruitment would not take place ship is quite understandable; he was her until well into 1943. commanding officer. Hi s exhausti ve reIn August of 1942, the first of the search into the history of thi s vessel has Small Ships arrived in New Guinea spanned nearly 25 years and covers not where they became heavil y engaged in onl y the ship herself, but also life on acti vities ranging from resuppl y mis- board, the traditions associated with her sions to landing operations again st de- and events in which she participated. He fended beaches. The vessel s were armed provides the reader with a rare insight with just about anything that could be into the people and circumstances that scrounged including light cannon, which shaped the frigate's 200-year voyage when fired often di slodged the decking into the hearts of the American people. to which they were affixed. Many of the A chronological style of writing cregun s were of WWI vintage. The gun - ates a narrative that is complete and ners came from US Army detachments reveal img; an afi cionado of naval hisSEA HIISTORY 83, WINTER 1997-98