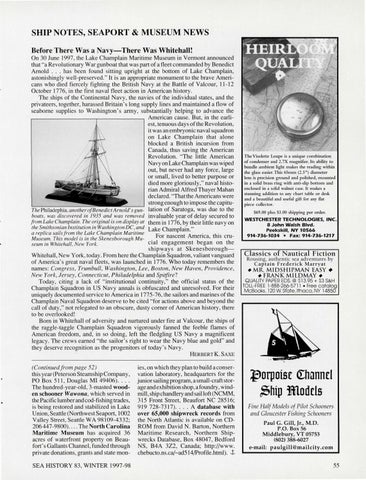 SHIP NOTES, SEAPORT & MUSEUM NEWS Before There Was a Navy-There Was Whitehall! On 30 June 1997, the Lake Champlain Maritime Museum in Vermont announced that "a Revolutionary War gunboat that was part of a fleet commanded by Benedict Arnold . . . has been found sitting upright at the bottom of Lake Champlain, astonishingly well-preserved." It is an appropriate monument to the brave Americans who died fiercely fighting the British Navy at the Battle of Valcour, 11-12 October 1776, in the first naval fleet action in American history. The ships of the Continental Navy, the navies of the individual states, and the privateers, together, harassed Britain 's long supply lines and maintained a flow of seaborne supplies to Washington's army, substantially helping to advance the American cause. But, in the earliest, tenuous days of the Revolution, it was an embryonic naval squadron on Lake Champlain that alone blocked a British incursion from Canada, thus saving the American Revolution. "The little American Navy on Lake Champlain was wiped out, but never had any force, large or small, lived to better purpose or died more glorious ly," naval historian Admiral Alfred Thayer Mahan declared. "That the Americans were strong enough to impose the capituThe Phi ladephia, another ofBenedict Arnold's gun- lation of Saratoga, was due to the boats , was discovered in 1935 and was removed invaluable year of delay secured to from Lake Champlain. The original is on display at them in 1776, by their little navy on the Smithsonian Institution in Washington DC, and Lake Champlain." a replica sailsji·om the Lake Champlain Maritime For nascent America, this cruMuseum. This model is in the Skenesborough Mucial engagement began on the seum in Whitehall , New York. shipway s at SkenesboroughWhitehall, New York, today. From here the Champlain Squadron, valiant vanguard of America 's great naval fleets, was launched in 1776. Who today remembers the names: Congress, Trumbull, Washington, Lee, Boston, New Ha ven, Providence, New York, Jersey, Connecticut, Philadelphia and Spitfire? Today, citing a lack of "institutional continuity," the official status of the Champlain Squadron in US Navy annals is obfuscated and unresolved. For their uniquely documented service to America in 1775-76, the sailors and marines of the Champlain Naval Squadron deserve to be cited "for actions above and beyond the call of duty ," not relegated to an obscure, dusty corner of American history, there to be overlooked! Born in Whitehall of adversity and nurtured under fire at Valcour, the ships of the raggle-taggle Champlain Squadron vigorously fanned the feeble flames of American freedom, and, in so doing, left the fledgling US Navy a magnificent legacy. The crews earned "the sailor's right to wear the Navy blue and gold" and they deserve recognition as the progenitors of today 's Navy.

The Visolette Loupe is a unique combination of condenser and 2. 7X magnifier. Its ability to bundle ambient light makes the reading within the glass easier.This 65mm (2.5 ") diameter lens is precision ground and polished, mounted in a solid brass ring with anti-slip bottom and enclosed in a solid walnut case. It makes a stunning addition to any chart table or desk and a beautiful and useful gift for any flat piece collector. $69.00 plus S3.00 shipping per order.