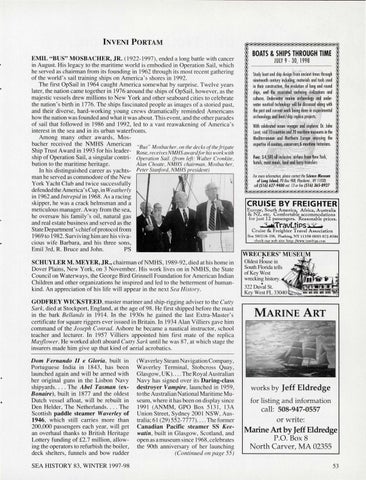 INVENI PORTAM EMIL &quot;BUS&quot; MOSBACHER, JR. (1922-1997), ended a long battle with cancer in August. His legacy to the maritime world is embodied in Operation Sail, which he served as chairman from its founding in 1962 through its most recent gathering of the world&#39;s sail training sh ips on America&#39;s shores in 1992. The first OpSail in 1964 caught America somewhat by surprise. Twelve years later, the nation came together in 1976 around the ships of OpSail, however, as the majestic vessels drew millions to New York and other seaboard cities to celebrate the nation&#39;s birth in 1776. The ships fascinated people as images of a storied past, and their diverse, hard-working young crews dramatically reminded Americans how the nation was founded and what it was about. This event, and the other parades of sail that followed in 1986 and 1992, led to a vast reawakening of America&#39;s interest in the sea and in its urban waterfronts. Among many other awards, Mosbacher received the NMHS American &quot;Bus&quot; Mosbacher, on the decks of the frigate Ship Trust Award in 1993 for his leader- Rose, receives NMHS awardfor his work with ship of Operation Sail, a singular contri- Operation Sail. (from left: Walter Cronkite, bution to the maritime heritage. Alan Choate, NMHS chairman, Mosbacher, In his distinguished career as yachts- Peter Stanford, NM HS president) man he served as commodore of the New \ t York Yacht Club and twice successfully defended the America&#39;s Cup, in Weatherly in 1962 and Intrepid in 1968. As a racing skipper, he was a crack helmsman and a meticulous manager. Away from the sea, he oversaw his family &#39;s oil, natural gas and real estate business and served as the State Department&#39;s chief of protocol from 1969 to 1982. Surviving him are his vivacious wife Barbara, and his three sons, Emil 3rd, R. Bruce and John . PS SCHUYLER M. MEYER, JR., chairman of NMHS, 1989-92, died at his home in Dover Plains, New York, on 3 November. Hi s work lives on in NMHS, the State Counci l on Waterways, the George Bird Grinnell Foundation for American Indian Children and other organizations he inspired and led to the betterment of humankind. An appreciation of his life will appear in the next Sea History.

BOATS &amp; SHIPS THROUGH TIME JULY 9 - 30, 1998 Study boat and ship design lrollt bncient times through nineteenth century including; materials and tools used in their construction, &quot; &quot;lution oflong and round ships, · · · ivilizatjons and cultures. - an~ underssed along with the past and current work in experimental archoeology and boatls~p rmlica projects, ;.

GODFREY WICKSTEED, master mariner and ship-rigging adviser to the Cutty Sark, died at Stockport, England, at the age of 98. He first shipped before the mast in the bark Bellands in 1914. In the 1930s he gained the last Extra-Master&#39;s certificate for square riggers ever issued in Britain. In 1934 Alan Villiers gave him command of the Joseph Conrad. Ashore he became a nautical instructor, school teacher and lecturer. In 1957 Villiers appointed him first mate of the replica Mayflower. He worked aloft aboard Cutty Sark until he was 87, at which stage the insurers made him give up that kind of aerial acrobatics.

Dom Fernando II e Gloria, built in Portuguese India in 1843, has been launched again and will be armed with her original guns in the Lisbon Navy shipyards .. .. The Abel Tasman (exBonaire) , built in 1877 and the oldest Dutch vessel afloat, will be rebuilt in Den Helder, The Netherlands .. .. The Scottish paddle steamer Waverley of 1946, which still carries more than 200,000 passengers each year, will get an overhaul thanks to British Heritage Lottery funding of £2 .7 million, allowing the operators to refurbish the boiler, deck shelters, funnels and bow rudder SEA HISTORY 83, WINTER 1997-98

(Waverley Steam Navigation Company, Waverley Terminal, Stobcross Quay, Glasgow, UK) .... The Royal Australian Navy has signed over its Daring-class destroyer Vampire, launched in 1959, to the Australian National Maritime Museum, where it has been on display since 1991 (ANMM, GPO Box 5131, 13A Union Street, Sydney 2001 NSW, Australia; 61 (29) 552-7777) .... The former Canadian Pacific steamer SS Keewatin, built in Glasgow, Scotland, and open as a museum si nce 1968, celebrates the 90th anniversary of her launching