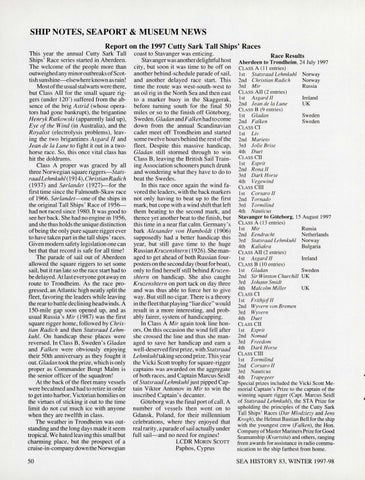 SHIP NOTES, SEAPORT &amp; MUSEUM NEWS Report on the 1997 Cutty Sark Tall Ships&#39; Races This year the annual Cutty Sark Tall Ships &#39; Race series started in Aberdeen. The welcome of the people more than outweighed any minoroutbreaks of Scottish sunshine-elsewhere known as rain! Most of the usual stalwarts were there, but Class All for the small square riggers (under 120&#39;) suffered from the absence of the brig Astrid (whose operators had gone bankrupt), the brigantine H enryk Rutkowski (apparently laid up), Eye of the Wind (in Australia), and the R oyalist (electrolysis problems), leaving the two brigantines Asgard II and Jean de la Lune to fight it out in a twohorse race. So, this once vital class has hit the doldrums. Class A proper was graced by all three Norwegian square riggers-StatsraadLehmkuhl (1914), Christian Radich (1937) and S¢rlandet (1927)-for the first time since the Falmouth-Skaw race of 1966. S¢rlandet-one of the ships in the original Tall Ships &#39; Race of 1956had not raced since 1980. It was good to see her back. She had no engine in 1956, and she thus holds the unique distinction of being the only pure square rigger ever to have taken part in the tall ships&#39; races. Given modem safety legislation one can bet that that record is safe for all time! The parade of sail out of Aberdeen allowed the square riggers to set some sail, but it ran late so the race start had to be delayed. At last everyone got away en route to Trondheim. As the race progressed, an Atlantic high neatly split the fleet, favoring the leaders while leaving the rear to battle declining headwinds. A 150-mile gap soon opened up, and as usual Russia&#39;s Mir (1987) was the first square rigger home, followed by Christian Radich and then Statsraad Lehmkuhl. On handicap these places were reversed. In Class B, Sweden&#39;s Gladan and Fa/ken were obviously enjoying their 50th anniversary as they fought it ·out. Gladan took the prize, which is only proper as Commander Bengt Malm is the senior officer of the squadron! At the back of the fleet many vessels were becalmed and had to retire in order to get into harbor. Victorian homilies on the virtues of sticking it out to the time limit do not cut much ice with anyone when they are twelfth in class. The weather in Trondheim was outstanding and the long days made it seem tropical. We hated leaving this small but charming place, but the prospect of a cruise-in-company down the Norwegian 50

coast to Stavanger was enticing. Race Results Stavanger was another delightful host Aberdeen to Trondheim, 24 July 1997 city, but soon it was time to be off on CLASS A ( 11 entries) another behind-schedule parade of sail , 1st Statsraad Lehmkuhl Norway Norway and another delayed race start. This 2nd Christian Radich Russia time the route was west-south-west to 3rd Mir an oil rig in the North Sea and then east CLASS All (2 entries) Ireland to a marker buoy in the Skaggerak, 1st Asgard 11 2nd Jean de la Lune UK before turning south ·for the final 50 CLASS B (9 entries) miles or so to the finish off Goteborg, !st Gladan Sweden Sweden. Gladan and Fa/ken had to come 2nd Fa/ken Sweden down from the annual Scandinavian CLASS er cadet meet off Trondheim and started 1st Liv some twelve hours behind the rest of the 2nd Marieto fleet. Despite this massive handicap, 3rd Jolie Brise Gladan still stormed through to win 4th Duet Class B, leaving the British Sail Train- CLASS err ing Association schooners punch drunk ! st Esprit and wondering what they have to do to 2nd Rona II 3rd Dark Horse beat the Swedes. 4th Vegewind In this race once again the wind fa- CLASS cm vored the leaders, with the back markers !st Corsaro II not only having to beat up to the first 2nd Tornado mark, but cope with a wind shift that left 3rd Tormilind them beating to the second mark, and 4th Nauticus thence yet another beat to the finish , but Stavanger to Gtiteborg, 15 August 1997 this time in a near flat calm. Germany&#39;s CLASS A (13 entries) Russia bark Alexander von Humboldt (1906) !st Mir 2nd Eendracht Netherlands supposedly had a better handicap this 3rd Statsraad Lehmkuhl Norway year, but still gave time to the huge 4th Kaliakra Bulgaria Russian Kruzenshtern (1926). She man- CLASS All (2 entries) aged to get ahead of both Russian four- I st Asgard /I Ireland posters on the second day (boat for boat), CLASS B (10 entries) Sweden only to find herself still behind Kruzen- I st Gladan shtern on handicap. She also caught 2nd Sir Winston Churchill UK Kruzenshtern on port tack on day three 3rd Johann Smidt UK and was thus able to force her to give 4th Malcolm Miller way. But still no cigar. There is a theory CLASS er I st Frithjof /I in the fleet that playing &quot;liar dice&quot; would 2nd Wyvern van Bremen result in a more interesting, and prob- 3rd Wyvern ably fairer, system of handicapping. 4th Duet In Class A Mir again took line hon- CLASS en ors. On this occasion the wind fell after 1st Esprit she crossed the line and thus she man- 2nd Nomad aged to save her handicap and earn a 3rd Freedom well-deserved first prize, with Statsraad 4th Dark Horse Lehmkuhl taking second prize. This year CLASS cm I st Tormilind the Vicki Scott trophy for square-rigger 2nd Corsaro /I captains was awarded on the aggregate 3rd Nauticus of both races, and Captain Marcus Seidl 4th Trapegeer of Statsraad Lehmkuhl just pipped Cap- Special prizes included the Vicki Scott Metain Viktor Antonov in Mir to win the morial Captain&#39;s Prize to the captain of the winning square rigger (Capt. Marcus Seidl inscribed Captain&#39;s decanter. Goteborg was the final port of call . A of Statsraad Lehmkuhl), the ST A Prize for number of vessels then went on to upholding the principles of the Cutty Sark Gdansk, Poland, for their millennium Tall Ships&#39; Races (Dar Mlodziezy and Jens celebrations, where they enjoyed that Krogh), the Helmut Bastian Bell for the ship with the youngest crew (Falken) , the Hon. real rarity, a parade of sail actually under Company of Master Mariners Prize for Good full sail-and no need for engines! Seamanship (Kvartsita) and others, ranging LCDR MORIN Scarr from awards for assistance in radio commuPaphos, Cyprus nication to the ship farthest from home. SEA HISTORY 83, WINTER 1997-98