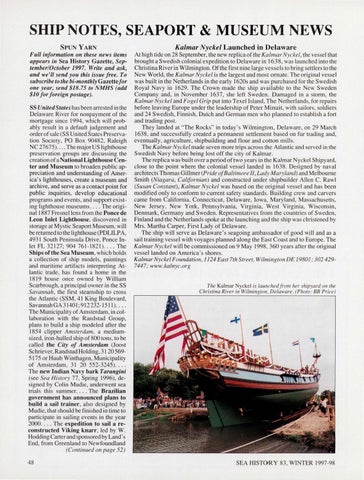 Full information on these news items appears in Sea History Gazette, September/October 1997. Write and ask, and we&#39; ll send you this issue free. To subscribe to the bi-monthly Gazettefor one year, send $18.75 to NMHS (add $10 for foreign postage).

Athigh tide on 28 September, the new replica of the Kalmar Nyckel, the vessel that brought a Swedish colonial expedition to Delaware in 1638 , was launched into the Christina River in Wilmington . Of the fi rst nine large vessels to bring settlers to the New World, the Kalmar Nyckel is the largest and most ornate. The ori ginal vessel was built in the Netherlands in the early 1620s and was purchased for the Swedi sh Royal Navy in 1629. The Crown made the ship available to the New Sweden Company and, in November 1637, she left Sweden. D amaged in a storm , the Kalmar Nyckel and Fogel Grip put into Texel Island, The Netherlands , fo r repairs before leaving Europe under the leadership of Peter Minuit, with sailors, soldiers and 24 Swedish, Finnish, Dutch and German men who pl anned to establish a fo rt and trading post. They landed at &quot;The Rocks&quot; in today&#39;s Wilmington, Delaware, on 29 March 1638, and successfull y created a permanent settlement based on fu r trading and , eventually, agriculture, shipbuilding and flour and cotton mills. The Kalmar Nycke l made seven more trips across the Atlantic and served in the Swedi sh Navy before being lost off the city of Kalmar. The replica was built over a period of two years in the Kalmar Nyckel Shipyard, close to the point where the colonial vessel landed in 1638 . DesÂˇigned by naval architects Thomas Gillmer(Pride ofBaltimore II , Lady Maryland) and Melbourne Smith (Niagara, Californian) and constructed under shipbuilder Allen C. Rawl (Susan Constant), Kalmar Nyckel was based on the original vessel and has been modified only to confo rm to current safety standards. Building crew and carvers came from California, Connecticut, Delaware, Iowa, Maryland, Massachusetts, New Jersey, New York , Pennsylvania, Virginia, West Virgini a, Wisconsin , Denmark, Germany and Sweden. Representati ves from the countries of Sweden, Finland and the Netherlands spoke at the launching and the ship was christened by Mrs. Martha Carper, First Lady of Delaware. The ship will serve as Delaware&#39;s seagoing ambassador of good will and as a sail training vessel with voyages pl anned along the East Coast and to Europe. The Kalmar Nyckel will be commissioned on 9 May 1998, 360 years after the original vessel landed on America&#39;s shores. Kalmar Nyckel Foundation, 1124 East 7th Street, Wilmington DE 19801 ; 302 4297447; www.kalnyc.org

SS United States has been arrested in the Delaware River for nonpayment of the mortgage since 1994, which will probably result in a default judgement and orderof sale (S S United States Preservation Society, PO Box 90482, Raleigh NC 27675) .. .. The major US lighthouse preservation groups are discussing the creation of a National Lighthouse Center and Museum to broaden public appreciation and understanding of Arnerica&#39; s lighthouses, create a museum and archive, and serve as a contact point for public inquiries, develop educational programs and events, and support ex isting lighthouse museums . .. . The original 1887 Fresnel lens from the Ponce de Leon Inlet Lighthouse, di scovered in storage at Mystic Seaport Museum , will be returned to the lighthouse (PDLILPA, 493 1 South Peninsula Drive, Ponce Inlet FL 32 127; 904 76 1-1 82 1).... The Ships of the Sea Museum, which holds a collection of ship models, paintings and maritime artifacts interpreting Atlantic trade, has fo und a home in the 1819 house once owned by Willi am Scarbrough, a principal owner in the SS Savannah, the first steamship to cross the Atl antic (SSM, 41 King Boulevard, SavannahGA3 1401 ; 91 2232-1 511) . .. . The Municipality of Amsterdam, in collaboration with the Randstad Group, plans to bu ild a ship modeled after the 1854 cl ipper Amsterdam, a mediumsized, iron-hulled ship of 800 tons, to be called the City of A msterdam (Joost Schriever, Randstad Holding, 3 120 5695175 or Huub Winthagen, Municipality of Amsterdam, 31 20 552-3245) . ... The new Indian Navy bark Tarangini (see Sea History 77, Spring 1996), designed by Colin Mudie, underwent sea tri als thi s summer. ... The Brazilian government has announced plans to build a sail trainer, also des igned by Mudie, that should be fini shed in time to participate in sailing events in the year 2000 .... The expedition to sail a reconstructed Viking knarr, led by W. Hodding Carter and sponsored by Land &#39;s End, from Greenland to Newfoundland (Continued on page 52) 48

Th e Kalmar Nyckel is launched from her shipyard on the Christina River in Wi lmington, Delaware. (Photo: BB Price)