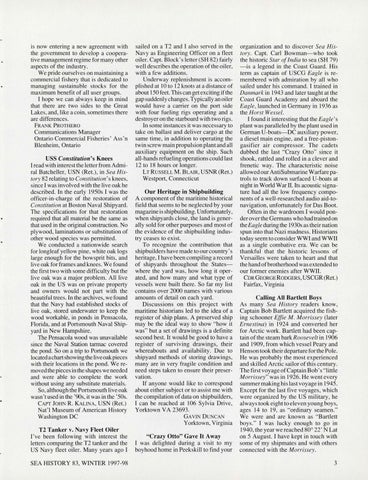 is now entering a new agreement with the government to develop a cooperative management regime for many other aspects of the industry. We pride ourselves on maintaining a commercial fishery that is dedicated to managing sustainable stocks for the maximum benefit of all user groups. I hope we can always keep in mind that there are two sides to the Great Lakes, and , like a coin, sometimes there are differences. FRANK PROTHERO Communications Manager Ontario Commercial Fisheries&#39; Ass &#39; n Blenheim, Ontario

USS Constitution &#39;s Knees I read with interest the letter from Admiral Batcheller, USN (Ret.), in Sea History 82 relating to Constitution&#39; s knees , since I was involved with the live oak he described. In the early 1950s I was the officer-in-charge of the restoration of Constitution at Boston Naval Shipyard. The specifications for that restoration required that all material be the same as that used in the original construction. No plywood, laminations or substitution of other wood species was permitted. We conducted a nationwide search for longleaf yellow pine, white oak logs large enough for the bowsprit bits, and live oak for frames and knees. We found the first two with some difficulty but the live oak was a major problem. All live oak in the US was on private property and owners would not part with the beautiful trees. In the archives, we found that the Navy had established stocks of live oak, stored underwater to keep the wood workable, in ponds in Pensacola, Florida, and at Portsmouth Naval Shipyard in New Hampshire. The Pensacola wood was unavailable since the Naval Station tarmac covered the pond. So on a trip to Portsmouth we located a chart showing the live oak pieces with their locations in the pond. We removed the pieces in the shapes we needed and were able to complete the work without using any substitute materials . So, although the Portsmouth live oak wasn &#39;t used in the &#39;90s, it was in the &#39;50s. CAPT JOHN R. KALINA , USN (Ret.) Nat&#39;l Museum of American History Washington DC T2 Tanker v. Navy Fleet Oiler I&#39;ve been following with interest the letters comparing the T2 tanker and the US Navy fleet oiler. Many years ago I SEA HISTORY 83, WINTER 1997-98

sailed on a T2 and I also served in the Navy as Engineering Officer on a fleet oiler. Capt. Block &#39;s letter (SH 82) fairly well describes the operation of the oiler, with a few additions . Underway replenishment is accomplished at 10 to 12 knots at a distance of about 150feet. This can get exciting if the gap suddenly changes. Typically an oiler would have a carrier on the port side with four fueling rigs operating and a destroyer on the starboard with two rigs. In some instances it was necessary to take on ballast and deliver cargo at the same time, in addition to operating the twin screw main propulsion plant and all auxiliary equipment on the ship. Such all-hands refueling operations could last 12 to 18 hours or longer. LTRUSSELLM. BLAIR, USNR (Ret.) Westport, Connecticut

Our Heritage in Shipbuilding A component of the maritime historical field that seems to be neglected by your magazine is shipbuilding. Unfortunately, when shipyards close, the land is generally sold for other purposes and most of the evidence of the shipbuilding industry ceases to exist. To recognize the contribution that shipbuilders have made to our country&#39;s heritage, I have been compiling a record of shipyards throughout the Stateswhere the yard was, how long it operated, and how many and what type of vessels were built there. So far my list contains over 2000 names with various amounts of detail on each yard. Di scussions on this project with maritime historians led to the idea of a register of ship plans. A preserved ship may be the ideal way to show &quot;how it was&quot; but a set of drawings is a definite second best. It would be good to have a register of surviving drawings , their whereabouts and availability. Due to shipyard methods of storing drawings, many are in very fragile condition and need steps taken to ensure their preservation. If anyone would like to correspond about either subject or to assist me with the compilation of data on shipbuilders, I can be reached at 106 Sylvia Drive, Yorktown VA 23693. GA VIN DUNCAN Yorktown, Virginia

&quot;Crazy Otto&quot; Gave It Away was delighted during a visit to my boyhood home in Peekskill to find your

organization and to discover Sea History. Capt. Carl Bowman-who took the historic Star of India to sea (SH 79) - is a legend in the Coast Guard. His term as captain of USCG Eagle is remembered with admiration by all who sai led under his command. I trained in Danmm;k in 1943 and later taught at the Coast Guard Academy and aboard the Eagle , launched in Germany in 1936 as the Horst Wessel. I found it interesting that the Eagle &#39;s plant was paralleled by the plant used in German U-boats-DC auxiliary power, a diesel main engine, and a free-pistongasifier air compressor. The cadets dubbed the last &quot;Crazy Otto&quot; since it shook, rattled and rolled in a clever and frenetic way. The characteristic noise allowed our AntiSubmarine Warfare patrols to track down surfaced U-boats at night in World War II. Its acoustic signature had all the low frequency components of a well-researched audio aid-tonavigation, unfortunately for Das Boot. Often in the wardroom I would ponder over the Germans who had trained on the Eagle during the 1930s as their nation spun into that Nazi madness. Historians today seem to consider WWI and WWII as a single combative era. We can be thankful that the historic lessons of Versailles were taken to heart and that the hand of brotherhood was extended to our former enemies after WWII. CDRGEORGERODGERS, USCGR(Ret.) Fairfax, Virginia

Calling All Bartlett Boys As many Sea History readers know, Captain Bob Bartlett acquired the fishing schooner Effie M. Morrissey (later Ernestina) in 1924 and converted her for Arctic work. Bartlett had been captain of the steam bark Roosevelt in 1906 and 1909, from which vessel Peary and Henson took their departure for the Pole. He was probably the most experienced and skilled Arctic sailor of this century. The first voyage of Captain Bob &#39;s &quot; little Morrissey&quot; was in 1926. He went every summer making his last voyage in 1945 . Except for the last five voyages , which were organized by the US military , he always took eight to eleven young boys, ages 14 to 19, as &quot;ordinary seamen.&quot; We were and are known as &quot; Bartlett boys.&quot; I was lucky enough to go in 1940, the year we reached 80Â° 22 &#39; N Lat on 5 August. I have kept in touch with some of my shipmates and with others connected with the Morrissey.