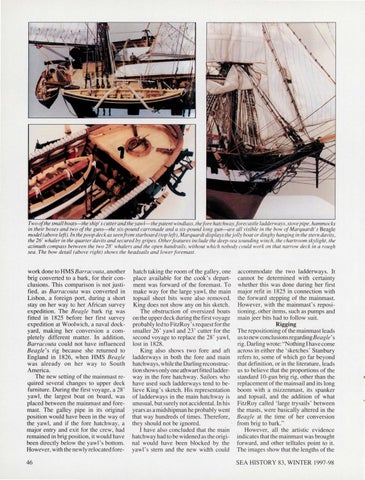 Two ofthe small boats--the ship's cutter and the yawl-the patent windlass, the fore hatchway.forecastle ladderways, stove pipe , hammocks in their boxes and two of the guns--the six-pound carronade and a six-pound long gun-are all visible in the bow of Marquardt' s Beagle model (above left) . In the poop deck as seen from starboard (top left) , Marquardt displays the jolly boat or dinghy hanging in the stern davits , the 26' whaler in the quarter da vits and secured by gripes. Otherfeatures include the deep-sea sounding winch, the chartroom skylight, the azimuth compass between the two 28' whalers and the open handrails , without which nobody could work on that narrow deck in a rough sea. Th e bow detail (above right) shows the headsails and lower foremast.

work done to HMS Barracouta, another brig converted to a bark, for their conclusions. This comparison is not justified, as Barracouta was converted in Lisbon, a foreign port, during a short stay on her way to her African survey expedition. The Beagle bark rig was fitted in 1825 before her first survey expedition at Woolwich, a naval dockyard, making her conversion a completely different matter. In addition, Barracouta could not have influenced Beagle's rig because she returned to England in 1826, when HMS Beagle was already on her way to South America. The new setting of the mainmast required several changes to upper deck furniture. During the first voyage, a 28' yawl, the largest boat on board, was placed between the mainmast and foremast. The galley pipe in its original position would have been in the way of the yawl, and if the fore hatchway, a major entry and exit for the crew, had remained in brig position, it would have been directly below the yawl's bottom. However, with the newly relocated fore-

hatch taking the room of the galley, one place available for the cook 's department was forward of the foremast. To make way for the large yawl, the main topsail sheet bits were also removed. King does not show any on his sketch. The obstruction of oversized boats on the upper deck during the first voyage probably led to FitzRoy's request forthe smaller 26' yawl and 23 ' cutter for the second voyage to replace the 28' yawl, lost in 1828. King also shows two fore and aft ladderways in both the fore and main hatchways, while the Darling reconstruction shows on Iy one athwart fitted ladderway in the fore hatchway. Sailors who have used such ladderways tend to believe King 's sketch. His representation of ladderways in the main hatchway is unusual, but surely not accidental. In his years as a midshipman he probably went that way hundreds of times. Therefore, they should not be ignored. I have also concluded that the main hatchway had to be widened as the original would have been blocked by the yawl's stem and the new width could

accommodate the two ladderways. It cannot be determined with certainty whether this was done during her first major refit in 1825 in connection with the forward stepping of the mainmast. However, with the mainmast's repositioning, other items, such as pumps and main jeer bits had to follow suit. Rigging The repositioning of the mainmast leads us to new conclusions regarding Beagle's rig. Darling wrote: "Nothing I have come across in either the 'sketches' Stanbury refers to, some of which go far beyond that definition , or in the literature, leads us to believe that the proportions of the standard 10-gun brig rig, other than the replacement of the mainsail and its long boom with a mizzenmast, its spanker and topsail , and the addition of what FitzRoy called 'large trysails ' between the masts, were basically altered in the Beagle at the time of her conversion from brig to bark." However, all the artistic ev idence indicates that the mainmast was brought forward, and other telltales point to it. The images show that the lengths of the SEA HISTORY 83, WINTER 1997-98