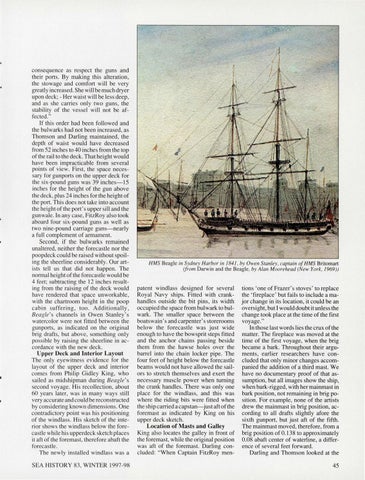 consequence as respect the guns and their ports. By making this alteration, the stowage and comfort will be very greatly increased. She wi ll be much dryer upon deck; - Her waist wi ll be less deep, and as she carries only two guns, the stabi lity of the vessel will not be affected." If this order had been fo ll owed and the bulwarks had not been increased, as Thomson and Darling maintained, the depth of waist would have decreased from 52 inches to 40 inches from the top of the rail to the deck. That he ight would have been impracticable from several points of view. First, the space necessary for gunports on the upper deck for the six-pound guns was 39 inches- IS inches for the height of the gun above the deck, plus 24 inches for the he ight of the port. Thi s does not take into account the height of the port 's upper sill and the gunwale. In any case, FitzRoy also took aboard four six-pound gun s as well as two nine-pound carriage guns-nearl y a fu ll complement of armament. Second, if the bulwarks remained unaltered, neither the forecastle nor the poopdeck could be raised without spoiling the sheerline considerably. Our artists tell us that did not happen. The normal height of the forecastle wou ld be 4 feet; subtracting the 12 inches resulting from the raising of the deck wou ld have rendered that space unworkable, with the chartroom height in the poop cabin sufferi ng, too. Add iti ona ll y, Beagle's channels in Owen Stanley's waterco lor were not fitted between the gunports, as indicated on the original brig drafts, but above, something on ly possible by raising the sheerline in accordance with the new deck.

Upper Deck and Interior Layout The on ly eyewitness ev idence for the layout of the upper deck and interior comes from Philip Gidley King, who sai led as midshipman during B eagle's second voyage . His recollection, about 60 years later, was in many ways still very accurate and could be reconstructed by considering known dimensions. One contradictory point was hi s positioning of the windl ass. Hi s sketch of the interior shows the windlass below the forecastle whil e hi s upperdeck sketch places it aft of the foremast, therefore abaft the forecastle. The new ly installed windlass was a SEA HISTORY 83, WINTER 1997-98

HMS Beagle in Sydney Harbor in 1841, by Owen Stanley, captain of HMS Britomart (from Darwin and the Beagle, by Alan Moorehead (New York, 1969))

patent windlass des igned for several Royal Navy ships. Fitted with crankhandles outside the bit pins, its width occupied the space from bu! wark to bulwark. The smaller space between the boatswain 's and carpenter's storerooms be low the forecastle was just wide enough to have the bowsprit steps fitted and the anchor chai ns pass ing beside them from the hawse holes over the barrel into the chain locker pipe. The fo ur feet of height below the forecastle beams would not have allowed the sailors to stretch themse lves and exert the necessary muscle power when turning the crank handles. There was only one place fo r the windlass , and this was where the riding bits were fitted when the ship carried a capstan-j ust aft of the foremast as indicated by King on hi s upper deck sketch .

Location of Masts and Galley King also locates the galley in front of the foremast, while the original position was aft of the foremast. Darling concluded: "When Captain FitzRoy men-

tions ' one of Frazer's stoves' to replace the 'fireplace' but fails to include a major change in its location, it could be an oversight, but I would doubt it unless the change took place at the time of the first voyage." In those last words lies the crux of the matter. The fireplace was moved at the time of the first voyage, when the brig became a bark. Throughout their argu. ments, earlier researchers have concluded that only minor changes accompanied the addition of a third mast. We have no documentary proof of that assumption , but all images show the ship, when bark-rigged, with her mainmast in bark position , not remaining in brig position. For example, none of the artists drew the mainmast in brig position , according to all drafts slightly afore the sixth gunport, but just aft of the fifth . The mainmast moved, therefore, from a brig position of0.138 to approximately 0.08 abaft center of waterline, a difference of several feet forward . Darling and Thomson looked at the 45