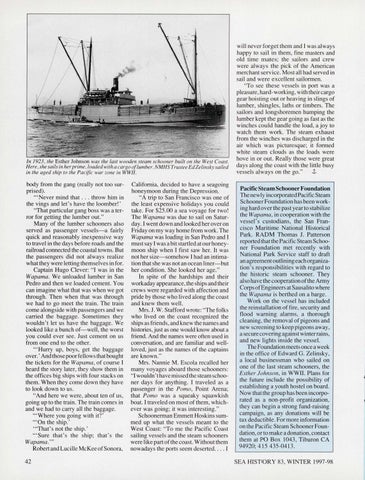 In 1923 , the. Esther Johnson was the last wooden steam schooner built on the West Coast. Here, she smls 111 her prime , loaded with a cargo of lumber. NMHS Truste e Ed Zelinsky sailed 111 the aged ship to the Pacific war zone in WWII.

body from the gang (really not too surprised). '"Never mind that . .. throw him in the vings and let's have the loomber! ' "That particular gang boss was a terror for getting the lumber out." Many of the lumber schooners also served as passenger vessels-a fairly quick and reasonably inexpensive way to travel in the days before roads and the railroad connected the coastal towns. But the passengers did not always realize what they were letting themselves in for. Captain Hugo Clever: "I was in the Wapama. We unloaded lumber in San Pedro and then we loaded cement. You can imagine what that was when we got through. Then when that was through we had to go meet the train . The train come alongside with passengers and we carried the baggage. Sometimes they wouldn't let us have the baggage. We looked like a bunch of-well, the worst you could ever see. Just cement on us from one end to the other. '"Hurry up, boys, get the baggage over.' And those poor fellows that bought the tickets for the Wapama, of course I heard the story later, they show them in the offices big ships with four stacks on them. When they come down they have to look down to us. "And here we were, about ten of us, going up to the train. The train comes in and we had to carry all the baggage. '"Where you going with it?' '"On the ship. ' '"That's not the ship. ' '"Sure that's the ship; that's the Wapama ."' Robert and Lucille McKee of Sonora, 42

California, decided to have a seagoing honeymoon during the Depression. "A trip to San Francisco was one of the least expensive holidays you could take. For $25.00 a sea voyage for two! The Wapama was due to sail on Saturday. I went down and looked her over on Friday on my way home from work. The Wapama was loading in San Pedro and I must say I was a bit startled at our honeymoon ship when I first saw her. It was not her size-somehow I had an intimation that she was not an ocean liner-but her condition. She looked her age. " In spite of the hardships and their workaday appearance, the ships and their crews were regarded with affection and pride by those who lived along the coast and knew them well. Mrs. J. W. Stafford wrote: "The folks who lived on the coast recognized the ships as friend s, and knew the names and histories, just as one would know about a friend. And the names were often used in conversation, and are familiar and wellloved, just as the names of the captains are known. " Mrs. Nannie M. Escola recalled her many voyages aboard those schooners: "I wouldn ' t have missed the steam schooner days for anything. I traveled as a passenger in the Pomo, Point Arena; that Pomo was a squeaky squawkish boat. I traveled on most of them, whichever was going; it was interesting. " Schoonerman Emmett Hoskins summed up what the vessels meant to the West Coast: "To me the Pacific Coast sailing vessels and the steam schooners were like part of the coast. Without them nowadays the ports seem deserted .... I

will never forget them and I was always happy to sail in them , fine masters and old time mates; the sailors and crew were always the pick of the American merchant service. Most all had served in sail and were excellent sailormen. "To see these vessels in port was a pleasure, hard-working, with their cargo gear hoisting out or heaving in slings of lumber, shingles, laths or timbers. The sailors and longshoremen humping the lumber kept the gear going as fast as the winches could handle the load, a joy to watch them work. The steam exhaust from the winches was discharged in the air which was picturesque; it formed white steam clouds as the loads were hove in or out. Really those were great days along the coast with the little busy J, vessels always on the go. " Pacific Steam Schooner Foundation The newly incorporated Pacific Steam Schooner Foundation has been working hard over the past year to stabilize the Wapama, in cooperation with the vessel' s custodians, the San Francisco Maritime National Historical Park. RADM Thomas J. Patterson reported that the Pacific Steam Schooner Foundation met recently with National Park Service staff to draft an agreement outlining each organization 's responsibilities with regard to the historic steam schooner. They also have the cooperation of the Army Corps of Engineers at Sausalito where the Wapama is berthed on a barge. Work on the vessel has included the reinstallation of fire , security and flood warning alarms, a thorough cleaning, the removal of pigeons and new screening to keep pigeons away, a secure covering against winter rains, and new lights inside the vessel. The Foundation meets once a week in the office of Edward G. Zelinsky, a local businessman who sailed on one of the last steam schooners, the Esther Johnson , in WWII. Plans for the future include the possibility of establishing a youth hostel on board. Now that the group has been incorporated as a non-profit organization, they can begin a strong fund-raising campaign, as any donations will be tax deductible. For more information on the Pacific Steam Schooner Foundation, or to make a donation , contact them at PO Box 1043, Tiburon CA 94920; 415 435-0413.