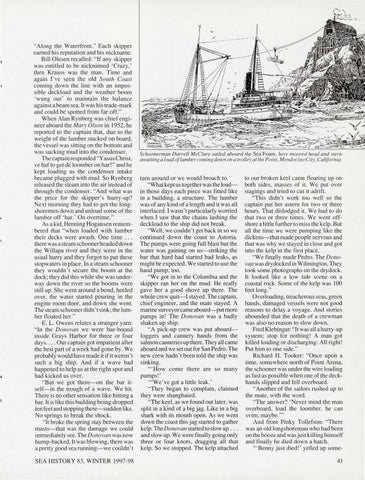 "Along the Waterfront." Each skipper earned hi s reputation and hi s nickname. Bill Olesen recalled: "If any skipper was entitled to be nicknamed ' Crazy,' then Krauss was the man. Time and again I've seen the old South Coast coming down the line with an impossible deckload and the weather boom 'wung out ' to maintain the balance against a beam sea. It was hi s trade-mark and could be spotted from far off." When Alan Rynberg was chief engineer aboard the Mary Olson in 1952, he reported to the captain that, due to the weight of the lumber stacked on board, the vessel was sitting on the bottom and was sucking mud into the condenser. The captain responded "Yas us Christ, ve haf to get de loomber on har !" and he kept loading as the condenser intake became plugged with mud . So Rynberg released the steam into the air instead of through the condenser. "And what was the price for the skipper's hurry-up? Next morning they had to get the longshoremen down and unload some of the lumber off ' har. ' On overtime." As a kid, Henning Hogansen remembered that "when loaded with lumber their decks were awash. One time .. . there was a steam schooner headed down the Willapa river and they were in the usual hurry and they forgot to put these stopwaters in place. In a steam schooner they wouldn't secure the boom at the dock ; they did this while she was underway down the river so the boom s were still up. She went around a bend, heeled over, the water started pouring in the engine room door, and down she went. The steam schoonerdidn 'tsink; the lumber floated her. " E. L. Owens relates a stranger yarn: "In the Donovan we were bar-bound inside Grays Harbor for three or four days .... Our captain got impatient after the best part of a week had gone by. We probably would have made it if it weren ' t such a big ship. And if a wave had happened to help us at the right spot and had kicked us over. "But we got there-on the bar itself-in the trough of a wave. We hit. There is no other sensation like hitting a bar. It is like this building being dropped ten feet and stopping there-sudden like. No springs to break the shock. "It broke the spring stay between the masts-that was the damage we could immediately see. The Donovan was now hump-backed. It was blowing, there was a pretty good sea running-we couldn ' t SEA HISTORY 83, WINTER 1997-98

turn around or we would broach to. "What kept us together was the loadin those days each piece was fitted like in a building, a structure. The lumber was of any kind of a length and it was all interlaced. I wasn ' t particularly worried when I saw that the chains lashing the deckload to the ship did not break. "Well, we couldn't get back in so we continued down the coast to Astoria. The pumps were going full blast but the water was gaining on us-striking the bar that hard had started bad leaks, as might be expected. We started to use the hand pump, too. "We got in to the Columbia and the skipper ran her on the mud. He really gave her a good shove up there. The whole crew quit-I stayed. The captain, chief engineer, and the mate stayed. A marine surveyor came aboard-put more pumps in! The Donovan was a badly shaken up ship. "A pick-up crew was put aboardloggers and cannery hands from the salmon canneries up there. They all came aboard and we set out for San Pedro. The new crew hadn't been told the ship was sinking. "'How come there are so many pumps! ' "'We've got a little leak.' "They began to complain, claimed they were shanghaied. "The keel, as we found out later, was split in a kind of a big jag. Like in a big shark with its mouth open . As we went down the coast this jag started to gather kelp. The Donovan started to slow up .. . and slow up. We were finally going only three or four knots, dragging all that kelp. So we stopped. The kelp attached

to our broken keel came floating up on both sides, masses of it. We put over stagings and tried to cut it adrift. "This didn ' t work too well so the captain put her astern for two or three hours. That dislodged it. We had to do that two or three times. We went offshore a little further to miss the kelp. But all the time we were pumping like the dickens-that made people nervous and that was why we stayed in close and got into the kelp in the first place. "We finall y made Pedro. The Donovan was dry docked in Wilmington. They took some photographs on the drydock . It looked like a low tide scene on a coastal rock. Some of the kelp was 100 feet long." Overloading, treacherous seas, green hands, damaged vessels were not good reasons to delay a voyage. And stories abounded that the death of a crewman was also no reason to slow down . Fred Klebingat: "It was all a hurry-up system; stop for nothing! A man got killed loading or discharging: All right! Put him to one side." Richard H. Tooker: "Once upon a time, somewhere north of Point Arena, the schooner was under the wire loading as fast as poss ible when one of the deckhands slipped and fell overboard. "Another of the sai lors rushed up to the mate, with the word. "The answer? 'Never mind the man overboard, load the loomber, he can svim , maybe.'" And from Pinky Tollefson: "There was an old longshoreman who had been on the booze and was just killing himself and finally he died down a hatch. "' Benny just died! ' yelled up some41