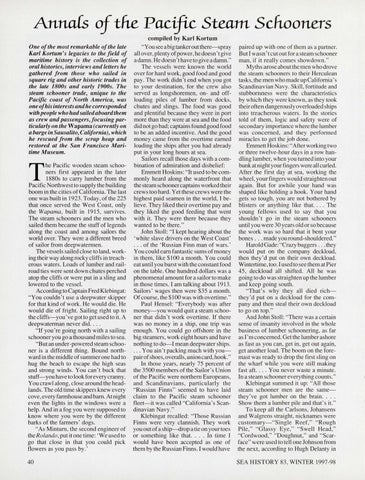 of the Pacific Steam Schooners

One of the most remarkable of the late Karl Kortum&#39;s legacies to the field of maritime history is the collection of oral histories, interviews and letters he gathered from those who sailed in square rig and other historic trades in the late 1800s and early 1900s. The steam schooner trade, unique to the Pacific coast of North America, was one ofhis interests and he corresponded with people who had sailed aboard them as crew and passengers, focusing particularly on the Wapama (currently on a barge in Sausalito, California), which he rescued from the scrap heap and restored at the San Francisco Maritime Museum.

he Pacific wooden steam schooners first appeared in the later 1880s to carry lumber from the PacificNorthwestto supply the building boom in the cities of California. The last one was built in 1923. Today, of the 225 that once served the West Coast, only the Wapama, built in 1915, survives. The steam schooners and the men who sailed them became the stuff of legends along the coast and among sailors the world over. They were a different breed of sailor from deepwatermen. The vessels sailed close to land, working their way along rocky cliffs in treacherous waters. Loads of lumber and railroad ties were sent down chutes perched atop the cliffs or were put in a sling and lowered to the vessel. According to Captain Fred Klebingat: &quot;You couldn&#39;t use a deepwater skipper for that kind of work. He would die. He would die of fright. Sailing right up to the cliffs-you &#39;ve got to get used to it. A deepwaterman never did .... &quot;If you &#39;re going north with a sailing schooner you go a thousand miles to sea. &quot;But an under-powered steam schooner is a different thing. Bound northward in the middle of summer one had to hug the beach to escape the high seas and strong winds . You can &#39; t buck that stuff-you have to look for every cranny. You crawl along, close around the headlands. The old time skippers knew every cove, every farmhouse and barn. At night even the lights in the windows were a help. And in a fog you were supposed to know where you were by the different barks of the farmers&#39; dogs. &quot;As Minturn , the second engineer of the Rolando, put it one time: &#39; We used to go that close in that you could pick flowers as you pass by. &#39; 40

compiled by Karl Kortum &quot;You see a big tankerout there-spray all over, plenty of power, hedoesn &#39; tgive a damn. Hedoesn &#39; thave to give a damn.&quot; The vessels were known the world over for hard work, good food and good pay. The work didn &#39; t end when you got to your destination, for the crew also served as longshoremen, on- and offloading piles of lumber from docks, chutes and slings. The food was good and plentiful because they were in port more than they were at sea and the food did not go bad; captains found good food to be an added incentive. And the good money came from the overtime earned loading the ships after you had already put in your long hours at sea. Sailors recall those days with a combination of admiration and disbelief: Emmett Hoskins: &quot;It used to be commonly heard along the waterfront that the steam schooner captains worked their crews too hard. Yet these crews were the highest paid seamen in the world, I believe. They liked their overtime pay and they liked the good feeding that went with it. They were there because they wanted to be there.&quot; John Stoll: &quot;I kept hearing about the &#39;white slave drivers on the West Coast&#39; ... of the &#39; Russian Finn man of wars.&#39; You could earn fantastic sums of money in them, like $ 100 a month. You could eat until you burst with the constant food on the table. One hundred dollars was a phenomenal amount for a sailor to make in those times. I am talking about 1913. Sailors &#39; wages then were $35 a month. Of course, the $100 was with overtime.&quot; Paul Hensel: &quot;Everybody was after money-you would quit a steam schooner that didn&#39;t work overtime. If there was no money in a ship, one trip was enough. You could go offshore in the big steamers, work eight hours and have nothing to do-I mean deepwater ships. ... You ain&#39;t packing much with youpair of shoes, overalls, union card, hook. &quot; In those years, nearly 75 percent of the 3500 members of the Sailor&#39;s Union of the Pacific were northern Europeans, and Scandinavians, particul arly the &quot;Russian Finns&quot; seemed to have laid claim to the Pacific steam schooner fleet-it was called &quot;California&#39;s Scandinavian Navy. &quot; Klebingat recalled: &quot;Those Russian Finns were very clannish. They work you out of a ship--drop a tie on your toes or something like that. . . . In time I would have been accepted as one of them by the Russian Finns. I would have

paired up with one of them as a partner. But I wasn &#39;t cut out for a steam schooner man, if it really comes showdown .&quot; Myths arose about the men who drove the steam schooners to their Herculean tasks, the men who made up California&#39;s Scandinavian Navy. Skill, fortitude and stubbornness were the characteristics by which they were known, as they took their often dangerous!y overloaded ships into treacherous waters. In the stories told of them , logic and safety were of secondary importance where the lumber was concerned, and they performed miracles to get the job done. Emmett Hoskins: &quot;After working two or three twelve-hour days in a row handling lumber, when you turned into your bunk at night your fingers were all curled. After the first day at sea, working the wheel, your fingers would Âˇstraighten out again. But for awhile yourÂˇ hand was shaped like holding a hook. Your hand gets so tough , you are not bothered by blisters or anything like that. ... The young fellows used to say that you shouldn &#39;t go in the steam schooners until you were 30 years old or so because the work was so hard that it bent your bones ... made you round-shouldered.&quot; Harold Gade: &quot;Crazy buggers .. . they would put on the company deckload, then they&#39;d put on their own deckload. Wintertime, too. I used to see them at Pier 45, deckload all shifted. All he was going to do was straighten up the lumber and keep going south. &quot;That &#39;s why they all died richthey &#39;d put on a deckload for the company and then steal their own deckload to go on top. &quot; And John Stoll: &quot;There was a certain sense of insanity involved in the whole business of lumber schoonering, as far as I&#39;m concerned. Get the lumber ashore as fast as you can, get in, get out again, get another load. The boom on the foremast was ready to drop the first sling on the wharf while you were still making fast aft. . .. You never waste a minute. In a steam schooner everything counts.&quot; Klebingat summed it up: &quot;All those steam schooner men are the samethey &#39;ve got lumber on the brain .... Show them a lumber pi le and that&#39;s it.&quot; To keep all the Carlsons, Johansens and Walgrens straight, nicknames were customary-&quot;Single Reef,&quot; &quot;Rough Pile,&quot; &quot; Glassy Eye,&quot; &quot;Swell Head ,&quot; &quot;Cordwood,&quot; &quot;Doughnut,&quot; and &quot;Scarface &quot; were used to tell one Johnson from the nex t, according to Hugh Delanty in SEA HISTORY 83, WINTER 1997-98