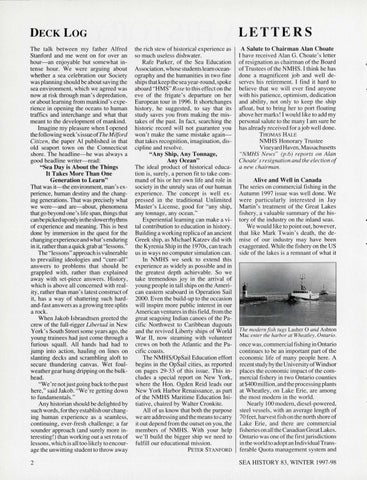 DECK LOG The talk between my father Alfred Stanford and me went on for over an hour-an enjoyable but somewhat intense hour. We were arguing about whether a sea celebration our Society was planning should be about saving the sea environment, which we agreed was now at risk through man&#39;s depredation, or about learning from mankind &#39;s experience in opening the oceans to human traffics and interchange and what that meant to the development of mankind. Imagine my pleasure when I opened the following week &#39;s issue ofThe Milford Citizen, the paper Al published in that old seaport town on the Connecticut shore. The headline-he was always a good headline writer-read:

the rich stew of historical experience as so much useless dishwater. Rafe Parker, of the Sea Education Association , whose students learn oceanography and the humanities in two fine ships that keep the sea year-round, spoke aboard &quot; HMS &quot; Rose to this effect on the eve of the frigate &#39;s departure on her European tour in 1996. It shortchanges history, he suggested, to say that its study saves you from making the mistakes of the past. In fact, searching the historic record will not guarantee you won&#39;t make the same mistake againthat takes recognition, imagination, discipline and resolve.

&quot;Sea Day is About the Things It Takes More Than One Generation to Learn&quot;

The ideal product of historical education is, surely, a person fit to take command of his or her own life and role in society in the unruly seas of our human experience. The concept is well expressed in the traditional Unlimited Master&#39;s License, good for &quot;any ship, any tonnage, any ocean.&quot; Experiential learning can make a vital contribution to education in history. Building a working replica of an ancient Greek ship, as Michael Katzev did with the Kyrenia Ship in the 1970s, can teach us in ways no computer simulation can. In NMHS we seek to extend this experience as widely as possible and in the greatest depth achievable. So we take tremendous joy in the arrival of young people in tall ships on the American eastern seaboard in Operation Sail 2000. Even the build-up to the occasion will inspire more public interest in our American ventures in this field , from the great seagoing Indian canoes of the Pacific Northwest to Caribbean dugouts and the revived Liberty ships of World War II, now steaming with volunteer crews on both the Atlantic and the Pacific coasts. The NMHS/OpSail Education effort begins in the OpSail cities, as reported on pages 29-33 of this issue. This incl udes a special report on New York, where the Hon. Ogden Reid leads our New York Harbor Renaissance, as part of the NMHS Maritime Education Initiative, chaired by Walter Cronkite. All of us know that both the purpose we are addressing and the means to carry it out depend from the outset on you, the members of NMHS. With your help we&#39;ll build the bigger ship we need to fulfill our educational mission .

That was it-the environment, man&#39;s experience, human destiny and the changing generations. That was precisely what we were-and are-about, phenomena that go beyond one&#39;s life span, things that can be picked up only in the slowerrhythms of experience and meaning. This is best done by immersion in the quest for the changing experience and what&#39;s enduring in it, rather than a quick grab at &quot;lessons.&quot; The &quot;lessons&quot; approach is vulnerable to prevailing ideologies and &quot;cure-all&quot; answers to problems that should be grappled with, rather than explained away with set-piece answers. History, which is above all concerned with reality, rather than man&#39;s latest construct of it, has a way of shattering such hardand-fast answers as a growing tree splits a rock. When Jakob Isbrandtsen greeted the crew of the full-rigger Libertad in New York &#39;s South Street some years ago, the young trainees had just come through a furious squall. All hands had had to jump into action, hauling on lines on slanting decks and scrambling aloft to secure thundering canvas. Wet foulweather gear hung dripping on the bulkhead. &quot;We&#39; re not just going back to the past here,&quot; said Jakob. &quot;We&#39;re getting down to fundamentals .&quot; Any historian should be delighted by such words, for they establish our changing human experience as a seamless, continuing, ever-fresh challenge; a far sounder approach (and surely more interesting!) than working out a set rota of lessons, which is all too likely to encourage the unwitting student to throw away 2

A Salute to Chairman Alan Choate I have received Alan G. Choate&#39;s letter of resignation as chairman of the Board of Trustees of the NMHS. I think he has done a magnificent job and well deserves his retirement. I find it hard to believe that we will ever find anyone with hi s patience, optimism, dedication and ability, not only to keep the ship afloat, but to bring her to port floating above her marks! I would like to add my personal salute to the many I am sure he has already received for a job well done. THOMAS HALE

Alive and Well in Canada The series on commercial fishing in the Autumn 1997 issue was well done. We were particularly interested in Jay Martin&#39;s treatment of the Great Lakes fishery , valuable summary of the history of the industry on the inland seas. We would like to point out, however, that like Mark Twain &#39;s death , the demise of our industry may have been exaggerated. While the fishery on the US side of the lakes is a remnant of what it

once was, commercial fishing in Ontario continues to be an important part of the economic life of many people here. A recent study by the University of Windsor places the economic impact of the commercial fishery in two Ontario counties at$400 million , and the processing plants at Wheatley, on Lake Erie, are among the most modem in the world. Nearly 100 modem, diesel-powered, steel vessels, with an average length of 70 feet, harvest fish on the north shore of Lake Erie, and there are commercial fisheries on all the Canadian Great Lakes. Ontario was one of the first jurisdictions in the world to adopt an Individual Transferable Quota management system and SEA HISTORY 83, WINTER 1997-98