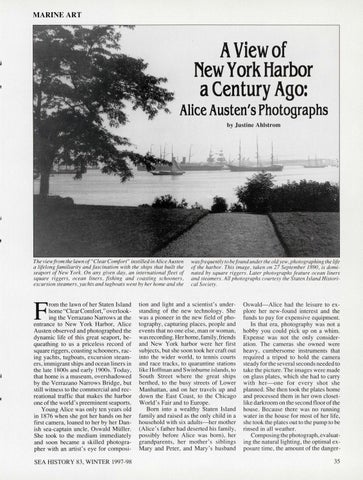 The view from the lawn of &quot;Clear Comfort&quot; instilled in Alice Austen a lifelong familiarity and fascination with the ships that built the seaport of New York. On any given day, an international fleet of square riggers, ocean liners, fishing and coasting schooners, excursion steamers, yachts and tugboats went by her home and she

rom the lawn of her Staten Island home &quot;Clear Comfort,&quot; overlooking the Verrazano Narrows at the entrance to New York Harbor, Alice Austen observed and photographed the dynamic life of this great seaport, bequeathing to us a priceless record of square riggers, coasting schooners, racing yachts, tugboats, excursion steamers, immigrant ships and ocean liners in the late 1800s and early 1900s. Today, that home is a museum , overshadowed by the Verrazano Narrows Bridge, but still witness to the commercial and recreational traffic that makes the harbor one of the world&#39;s preeminent seaports. Young Alice was only ten years old in 1876 when she got her hands on her first camera, loaned to her by her Danish sea-captain uncle, Oswald MUiler. She took to the medium immediately and soon became a skilled photographer with an artist&#39;s eye for composi-

was frequently to be found under the old yew, photographing the life of the harbor. This image , taken on 27 September 1890, is dominated by square riggers. Later photographs feature ocean liners and steamers. All photographs courtesy the Staten Island Historical Society.

tion and light and a scientist&#39;s understanding of the new technology. She was a pioneer in the new field of photography, capturing places, people and events that no one else, man or woman, was recording. Her home, family, friends and New York harbor were her first subjects, but she soon took her craft out into the wider world, to tennis courts and race tracks, to quarantine stations like Hoffman and Swinburne islands, to South Street where the great ships berthed, to the busy streets of Lower Manhattan, and on her travels up and down the East Coast, to the Chicago World&#39;s Fair and to Europe. Born into a wealthy Staten Island family and raised as the only child in a household with six adults-her mother (Alice &#39;s father had deserted his family, possibly before Alice was born), her grandparents, her mother&#39;s siblings Mary and Peter, and Mary&#39;s husband

Oswald-Alice had the leisure to explore her new-found interest and the funds to pay for expensive equipment. In that era, photography was not a hobby you could pick up on a whim. Expense was not the only cons ideration. The cameras she owned were heavy, cumbersome instruments that required a tripod to hold the camera steady for the several seconds needed to take the picture. The images were made on glass plates, which she had to carry with her-one for every shot she planned. She then took the plates home and processed them in her own closetlike darkroom on the second floor of the house. Because there was no running water in the house for most of her life, she took the plates out to the pump to be rinsed in all weather. Composing the photograph, eval uating the natural lighting, the optimal exposure time, the amount of the danger-