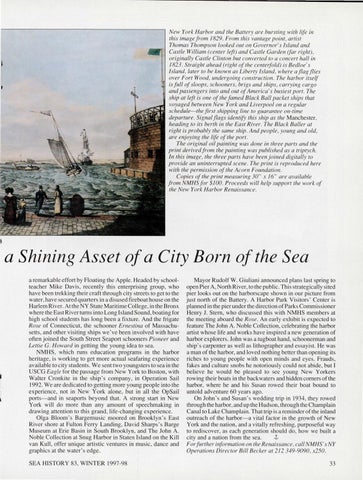 New York Harbor and the Battery are bursting with life in this imagejf"om 1829. From this vantage point, artist Thomas Thompson looked out on Governor's Island and Castle William (center left) and Castle Garden (far right) , originally Castle Clinton but converted to a concert hall in 1823. Straight ahead (right of the cente1fo ld) is Bedloe' s Istand, later to be known as Liberty Island , where a flag flies over Fort Wood, undergoing construction. The harbor itself is full of sloops, schooners, brigs and ships, carrying cargo and passengers into and out of America' s busiest port. The ship at left is one of the famed Black Ball packet ships that voyaged between New York and Live1pool on a regular schedule-the first shipping line to guarantee on-time departure. Signal flags identify this ship as the Manchester, heading to its berth in the East River. The Black Baller at right is probably the same ship. And people, young and old, are enjoying the life of the port. The original oil painting was done in three parts and the print derived from the painting was published as a triptych. In this image, the three parts have been joined digitally to provide an uninterrupted scene. The print is reproduced here with the permission of the Acorn Foundation. Copies of the print measuring 30" x 16" are available from NMHSfor $100. Proceeds will help support the work of the New York Harbor Renaissance.

a Shining Asset of a City Born of the Sea a remarkable effort by Floating the Apple. Headed by schoolteacher Mike Davis, recently this enterprising group, who have been trekking their craft through city streets to get to the water, have secured quarters in a disu sed fireboat house on the Harlem River. AttheNY State Maritime College, in the Bronx where the East Ri ver turns into Long Island Sound, boating for high school students has long been a fixture. And the fri gate Rose of Connecticut, the schooner Ernestina of Massachusetts, and other visiting ships we 've been involved with have often joined the South Street Seaport schooners Pioneer and Lettie G. Howard in getting the young idea to sea. NMHS, which runs ed ucation programs in the harbor heritage, is worki ng to get more actual seafaring experience available to city students. W e sent two youngsters to sea in the USCG Eagle for the passage from New York to Boston , with Walter Cronkite in the ship ' s company, in Operation Sail 1992. We are dedicated to getting more young people into the experience, not in New York alone, but in all the OpSail ports-and in seaports beyond that. A strong start in New York will do more than any amount of speechmaking in drawing attention to this grand , life-changing experience. Olga Bloom ' s Bargemusic moored on Brookl yn 's East River shore at Fulton Ferry Landing, David Sharps's Barge Museum at Erie Basin in South Brookl yn, and The John A. Noble Collection at Snug Harbor in Staten Island on the Kill van Kull , offer unique artistic ventures in music, dance and graphics at the water's edge. SEA HISTORY 83, WINTER 1997-98

Mayor Rudolf W. Giuliani announced plans last spring to open Pier A, North River, to the public. This strategicall y sited pier looks out on the harborscape shown in our picture from just north of the Battery. A Harbor Park Visitors' Center is planned in the pier under the direction of Parks Commissioner Henry J. Stem, who di sc ussed this with NMHS members at the meeting aboard the Rose. An early ex hibit is expected to feature The John A. Noble Collection, celebrating the harbor artist whose life and works have inspired a new generation of harbor explorers. John was a tugboat hand , schoonerman and ship's carpenter as well as lithographer and essayi st. He was a man of the harbor, and loved nothing better than opening its riches to young people with open minds and eyes. Frauds, fakes and culture snobs he notoriously could not abide, but I believe he would be pleased to see young New Yorkers rowing their boats in the backwaters and hidden comers of the harbor, where he and his Susan rowed their boat bound to untold adventure 60 years ago. On John's and Susan's wedding trip in 1934, they rowed through the harbor, and up the Hudson , through the Champlain Canal to Lake Champlain. That trip is a reminder of the inland outreach of the harbor-a vital factor in the growth of New York and the nation , and a vitally refreshing, purposeful way to rediscover, as each generation should do, how we built a 1, city and a nation from the sea. Forfurther information on the Renaissance , call NMHS' s NY Operations Director Bill Becker at 212 349-9090, x250. 33