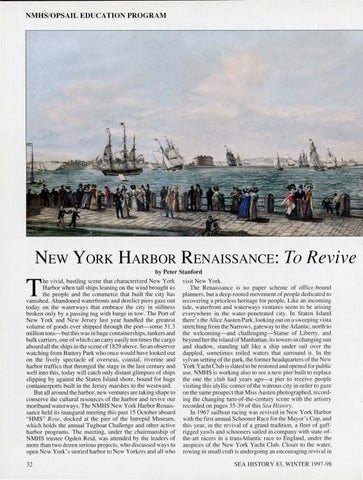 by Peter Stanford he vivid , bustling scene that characterized New York Harbor when tall ships leaning on the wind brought us the people and the commerce that built the city has vanished. Abandoned waterfronts and derelict piers gaze out today on the waterways that embrace the c ity in stillness broken only by a passing tug with barge in tow. The Port of New York and New Jersey last year handled the greatest volume of goods ever shipped through the port-some 51.3 million tons-but this was in hugecontainerships, tankers and bulk carriers, one of which can carry eas il y ten times the cargo aboard all the ships in the scene of 1829 above. So an observer watching from Battery Park who once wo uld have looked out on the live ly spectacle of overseas, coastal, riverine and harbor traffics that thronged the stage in the las t century and well into this, today will catch only distant glimpses of ships slipping by against the Staten Island shore, bound for huge containerports built in the Jersey marshes to the westward. But all around the harbor, new ventures are taking shape to conserve the cultural resources of the harbor and revive our moribund waterways. The NMHS New York Harbor Renaissance held its inaugural meeting this past 15 October aboard &quot; HMS &quot; Rose, docked at the pier of the Intrepid Museum, which holds the annual Tugboat Challenge and other active harbor programs. T he meeting, under &quot;the chairmanship of NMHS trustee Ogden Reid, was attended by the leaders of more than two dozen serious projects, who discussed ways to open New York&#39;s storied harbor to New Yorkers and all who

vi sit New York. The Renaissance is no paper scheme of office-bound planners, but a deep-rooted movement of people dedicated to recovering a priceless heritage for people. Like an incoming tide, waterfront and waterways ventures seem to be ari sing everyw here in the water-penetrated city. In Staten Island there &#39; s the Alice Austen Park, looking out on a sweepi ng vista stretching from the Narrows , gateway to the Atlantic, north to the we lcomi ng-and challenging-Statue of Liberty, and beyond herthe island of Manhattan , its towers in changing sun and shadow , standing tall like a ship under sail over the dappled, sometimes roiled waters that surround it. In the sylvan setting of the park, the former headquarters of the New York Yacht Club is slated to be restored and opened for public use. NMHS is working also to see a new pier built to replace the one the club had years ago- a pier to receive people visiting this idyllic corner of the watrous city in order to gaze on the same prospect that Mi ss Austen photographed , recording the changing turn-of-the-century scene with the artistry recorded on pages 35-39 of this Sea History. In 1967 sailboat racing was revived in New York Harbor with the first an nual Schooner Race for the Mayor&#39;s Cup, and this year, in the revival of a grand tradition , a fleet of gaffrigged yawls and schooners sail ed in company with state-ofthe-art racers in a transAtlantic race to England, under the auspices of the New York Yacht Club. Closer to the water, rowing in small craft is undergoi ng an encouraging revival in SEA HISTORY 83, WINTER 1997-98