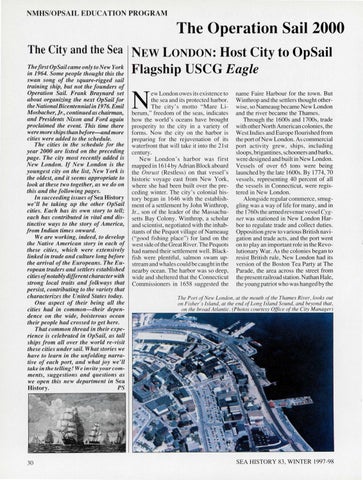 The Operation Sail 2000 The City and the Sea NEW LONDON: Host City to OpSail ThefirstOpSailcameonlytoNew York in 1964. Some people thought this the swan song of the square-rigged sail training ship, but not the founders of Operation Sail. Frank Braynard set about organizing the next Op Sail for the National Bicentennial in 1976. Emil Mosbacher, Jr., continued as chairman, and Presidents Nixon and Ford again proclaimed the event. This time there were more ships than before--and more cities were added to the schedule. The cities in the schedule for the year 2000 are listed on the preceding page. The city most recently added is New London. If New London is the youngest city on the list, New York is the oldest, and it seems appropriate to look at these two together, as we do on this and the following pages. In succeeding issues of Sea History we'll be taking up the other OpSail cities. Each has its own story to tell; each has contributed in vital and distinctive ways to the story of America, from Indian times onward. We are working, indeed, to develop the Native American story in each of these cities, which were extensively linked in trade and culture long before the arrival of the Europeans. The European traders and settlers established cities ofnotably different character with strong local traits and folkways that persist, contributing to the variety that characterizes the United States today. One aspect of their being all the cities had in common-their dependence on the wide, boisterous ocean their people had crossed to get here. That common thread in their experience is celebrated in OpSail, as tall ships from all over the world re-visit these cities under sail. What stories we have to learn in the unfolding narrative of each port, and what joy we'll take in the telling! We invite your comments, suggestions and questions as we open this new department in Sea PS History.

Flagship USCG Eagle ew London owes its existence to the sea and its protected harbor. The city's motto "Mare Liberum," freedom of the seas, indicates how the world 's oceans have brought prosperity to the city in a variety of forms. Now the city on the harbor is preparing for the rejuvenation of its waterfront that will take it into the 2 1st century . New London 's harbor was first mapped in 1614 by Adrian Block aboard the Onrust (Restless) on that vessel's historic voyage east from New York, where she had been built over the preceding winter. The city's coloni al hi story began in J 646 with the establishment of a settlement by John Winthrop, Jr. , son of the leader of the Massachusetts Bay Colony. Winthrop, a schol ar and scientist, negotiated with the inhabitants of the Pequot vi llage ofNameaug ("good fishin g place") for land on the west side of the Great River. The Pequots had named their settlement well. Blackfish were plentiful , salmon swam upstream and whales cou ld be caught in the nearby ocean. The harbor was so deep, wide and she ltered that the Connecticut Comm iss ioners in 1658 suggested the

name Faire Harbour for the town. But Winthrop and the settlers thought otherwise, so Nameaug became New London and the river became the Thames. Through the 1600s and 1700s, trade with other North American co lonies, the West Indies and Europe flouri shed from the port of New London . As commercial port activity grew, ships, including sloops, brigantines, schooners and barks, were designed and bui lt in New London. Vesse ls of over 65 tons were being launched by the late 1600s. By 1774, 70 vessels, representing 40 percent of all the vessels in Connecticut, were registered in New London . Alongside regular commerce, smuggling was a way of life for many, and in the 1760s the armed revenue vessel Cygnet was stationed in New London Harbor to regu late trade and collect duties . Oppos ition grew to various British navigation and trade acts, and the port went on to play an important role in the Revolutionary War. As the co lonies began to resist British rule, New London had its version of the Boston Tea Party at T he Parade, the area across the street from the present rai Iroad station .Nathan Hale, the young patriot who was hanged by the

Th e Port of New London, at the mouth of the Thames River, looks out on Fisher's Island, at the end of Long Island Sound, and beyond that , on the broad Atlantic. (Photos courtesy Office of the City Manager)