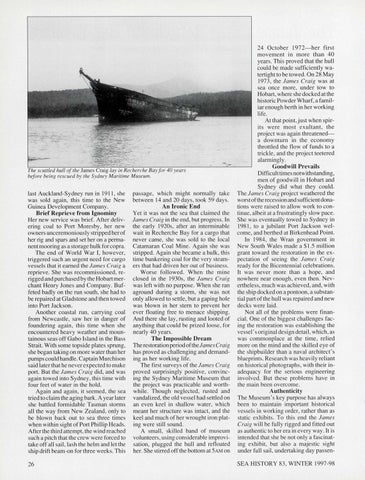 The scuttled hull of the James Craig lay in Recherche Bay for 40 years before being rescued by the Sydney Maritime Museum .

last Auckland-Sydney run in 19 11 , she was sold again , this time to the New Guinea Development Company. Brief Reprieve from Ignominy Her new service was brief. After delivering coal to Port Moresby, her new owners unceremon iously stripped her of her rig and spars and set her on a permanent mooring as a storage hulk fo r copra. The end of World War I, however, triggered such an urgent need for cargo vessels that it earned the James Craig a reprieve. She was recommi ssioned, rerigged and purchased by the Hobart merchant Henry Jones and Company . Buffe ted badly on the run south , she had to be repaired at Gladstone and then towed into Port Jackson . Another coastal run , carrying coal from Newcastle, saw her in danger of foundering again, this time when she encountered heavy weather and mountainous seas off Gabo Island in the Bass Strait. With some topside plates sprung, she began taking on more water than her pumps could handle. Captain Murchison said later that he never expected to make port. But the James Craig did , and was again towed into Sydney, thi s time with four feet of water in the hold . Again and again , it seemed, the sea tried to claim the aging bark. A year later she battled formidable Tasman storms all the way from New Zealand , onl y to be blown back o ut to sea three times when within sight of Port Phillip Heads. After the third attempt, the wind reached such a pitch that the crew were forced to take off all sail, lash the hel m and let the ship drift beam-on for three weeks. This

passage, which might normally take between 14 and 20 days , took 59 days . An Ironic End Yet it was not the sea that claimed the James Craig in the end , but progress. In the early 1920s, after an interminable wait in Recherche Bay for a cargo that never came, she was sold to the local Catamaran Coal Mine. Again she was stripped. Again she became a hulk, this time bunkering coal for the very steamers that had driven her out of business. Worse followed. When the mine closed in the 1930s, the James Craig was left with no purpose. When she ran aground during a storm, she was not only allowed to settle, but a gaping hole was blown in her stern to prevent her ever floating free to menace shipping. And there she lay, rusting and looted of anything that could be prized loose, for nearly 40 years . The Impossible Dream The restoration period of the James Craig has proved as challengi ng and demanding as her working life. The first surveys of the James Craig proved surpri singly positi ve, convincing the Sydney Maritime Museum that the project was practicable and worthwhile. Though neglected, rusted and vandali zed, the old vessel had settled on an even keel in shallow water, which meant her structure was intact, and the keel and much of her wro ught iron plating were still sound. A small , skilled band of museum volunteers , using considerable improvisation , plugged the hull and refloated her. She stirred off the bottom at SAM on

24 October 1972-her first movement in more than 40 years. This proved that the hull could be made sufficiently watertight to be towed. On 28 May 1973, the James Craig was at sea once more, under tow to Hobart, where she docked at the hi storic Powder Wharf, a familiar enough berth in her working life. At that point, just when spirits were mo st ex ultant, the project was again threateneda downturn in the economy throttled the flow of funds to a trickle, and the project teetered alarmingly. Goodwill Prevails Difficult times notwithstanding, men of goodwill in Hobart and Sydney did what they could. The James Craig project weathered the worst of the recession and sufficient donations were raised to allow work to continue, albeit at a frustratingly slow pace. She was eventually towed to Sydney in 1981, to a jubilant Port Jackson welcome, and berthed at Birkenhead Point. In 1984, the Wran government in New South Wales made a $1.5 million grant toward the restoration in the expectation of seeing the James Craig ready for the B icentennial celebrations. It was never more than a hope, and nowhere near enough, even then. Nevertheless, much was achieved, and , with the ship docked on a pontoon , a substantial part of the hull was repaired and new decks were laid . Not all of the problems were financial. One of the biggest challenges facing the restoration was establi shing the vessel's original design detai 1, which, as was commonplace at the time, relied more on the mind and the skilled eye of the shipbuilder than a naval architect's blueprints. Research was heavi ly reliant on historical photographs, with their inadequacy for the serious engi neering involved. But these problems have in the main been overcome. Authenticity The Museum 's key purpose has always been to maintain important hi storical vessels in working order, rather than as static exh ibits. To this end the James Craig will be fully rigged and fitted out as authentic to her era in every way. It is intended that she be not on ly a fascinating exhibit, but also a majestic sight under full sai l, undertaking day passenSEA HISTORY 83, WINTER 1997-98