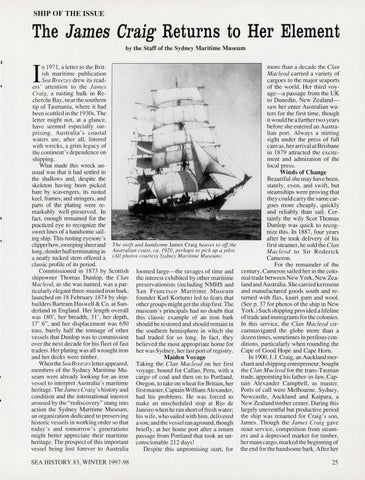 The James Craig Returns to Her Element by the Staff of the Sydney Maritime Museum n 1971, a letter to the British maritime publication Sea Breezes drew its readers' attenti on to the James Craig, a rusting hulk in Recherche Bay, near the southern tip of Tasmania, where it had been scuttled in the 1930s. The letter might not, at a glance, have seemed especially surprising. Australia ' s coastal waters are, after all , littered with wrecks, a grim legacy of the continent' s dependence on shipping. What made this wreck unusual was that it had settled in the shallows and, despite the skeleton having been picked bare by scavengers, its rusted keel, frames , and stringers, and parts of the plating were remarkably well-preserved. In fact, enough remained for the practiced eye to recognize the sweet lines of a handsome sailing ship. This rusting eyesore's clipper bow, sweeping sheerand The swift and handsome James Craig heaves to off the long, slender hull terminating in Australian coast, ca. 1920 , perhaps to pick up a pilot. a neatly tucked stern offered a (All photos courtesy Sydney Maritime Mus eum) classic profile of its period. Commi ssioned in 1873 by Scottish loomed large-the ravages of time and shipowner Thomas Dunlop, the Clan the interest ex hibited by other maritime Macleod, as she was named, was a par- preservationists (including NMHS and ticularl y elegant three-masted iron bark, San Francisco Maritim e Muse um launched on 18 February 1874 by ship- founder Karl Kortum) led to fears that builders Bartram Haswell & Co. at Sun- other groups might get the ship first. The derland in England. Her length overall museum 's principals had no doubt that was 180', her breadth , 31', her depth , this classic example of an iron bark 17' 6", and her displacement was 650 should be restored and should remain in tons. barely half the tonnage of other the southern hemisphere in which she vessels that Dunlop was to commission had traded for so long. In fact, they over the next decade for hi s fleet of fast believed the most appropriate home for traders. Her plating was all wrought iron her was Sydney, her last port of registry. and her decks were timber. Maiden Voyage When theSea Breezes letter appeared, Taking the Clan Macleod on her first members of the Sydney Maritime Mu- voyage, bound for Callao, Peru , with a seum were already looking for an iron cargo of coal and then on to Portland, vessel to interpret Australia 's maritime Oregon, to take on wheat for Britain, her heritage. The lames Craig ' s hi story and first master, Captain William Alexander, condition and the international interest had his problems. He was forced to aroused by the "rediscovery" stung into make an un scheduled stop at Rio de action the Sydney Maritime Museum , Janeiro when he ran short of fres h water; an organization dedi cated to preserving his wife, who sailed with him , delivered historic vessels in working order so that a son; and the vessel ran agro und, though today 's and tomorrow ' s generati ons briefly , at her home port after a return might better appreciate their maritime passage from Portland that took an unheritage. The prospect of this important conscionable 212 days! vessel being lost forever to Australia Despite this unpromising start, for

more than a decade the Clan Macleod carri ed a variety of cargoes to the major seaports of the world. Her third voyage-a passage from the UK to Dunedin, New Zealandsaw her enter Australian waters for the first time, though it would be a further two years before she entered an Australian port. Always a stirring sight under the press of full canvas, he r arrival at Brisbane in 1879 attracted the excitement and admiration of the local press.

Winds of Change Beautiful she may have been, stately, even, and swift, but steamships were proving that they could carry the same cargoes more cheaply, quickly and reliably than sail. Certainly the wily Scot Thomas Dunlop was quick to recognize thi s. In 1887, four years after he took delivery of hi s first steamer, he sold the Clan Ma cleod to Sir Rod e rick Cameron . For the remainder of the century, Cameron sailed her in the colonial trade between New York, New Zealand and Australia. She carried kerosene and manufactured goods south and returned with flax , kauri gum and wool. (See p. 37 for photos of the ship in New York.) Such shipping provided a lifeline of trade and immigrants for the colonies. In this service, the Clan Macleod circumnavigated the globe more than a dozen times, sometimes in perilous conditions, particularl y when rounding the Cape of Good Hope and Cape Horn. In 1900, J. J. Craig, an Auckland merchant and shipping entrepreneur, bought the Clan Macleod for the trans-Tasman trade, appointing hi s father-in-law , Captain Alexander Campbell, as master. Ports of call were Melbourne, Sydney, Newcastle, Auckland and Kaipara, a New Zealand timber center. During this largely uneventful but productive period the ship was renamed for Craig's son, James. Though the James Craig gave stout service, compe tition from steamers and a depressed market for timber, her main cargo, marked the beginning of the end for the handsome bark. After her 25