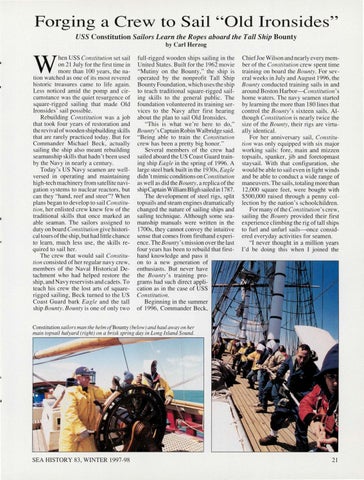 Forging a Crew to Sail ''Old Ironsides'' USS Constitution Sailors Learn the Ropes aboard the Tall Ship Bounty by Carl Herzog hen USS Constitution set sai l on 21 July for the first time in more than I 00 years, the nation watched as one of its most revered historic treasures came to life again. Less noticed amid the pomp and circumstance was the quiet resurgence of square-ri gged sailing that made Old Ironsides ' sai I possible. Rebuilding Constitution was a job that took four years of restoration and the revival of wooden shipbuilding skill s that are rarely practiced today. But for Commander Michael Beck, actuall y sailing the ship also meant rebuilding seamanship skills that hadn ' t been used by the Navy in nearl y a century. Today 's US Navy seamen are wellversed in operating and maintaining high-tech machinery from satellite navigation systems to nuclear reactors , but can they " hand, reef and steer"? When plans began to develop to sail Constitution, her enlisted crew knew few of the traditional skills that once marked an able seaman. The sai lors assigned to duty on board Constitution give hi storical tours of the ship, but had little chance to learn, much less use, the skills required to sail her. The crew that would sai l Constitution consisted of her regular navy crew, members of the Naval Historical Detachment who had helped restore the ship, and Navy reservists and cadets. To teach his crew the lost arts of squarerigged sa iling , Beck turned to the US Coast Guard bark Eagle and the tall ship Bounty. Bounty is one of only two

full-rigged wooden ships sailing in the United States. Built for the 1962 movie "M utiny on the Bounty," the ship is operated by the nonprofit Tall Ship Bounty Foundation, which uses the ship to teach traditional square-rigged sailing sk ill s to the general public. The foundation volunteered its training services to the Navy after first hearing about the plan to sail Old Ironsides. "This is what we're here to do," Bounty's Captain Robin Walbridge said. "Being able to train the Constitution crew has been a pretty big honor. " Several members of the crew had sailed aboard the US Coast Guard training ship Eagle in the spring of 1996. A large steel bark built in the 1930s, Eagle didn ' t mimic conditions on Constitution as well as did the Bounty, a replica of the ship Captain William Bligh sailed in 1787. The development of steel rigs , split topsails and steam engines dramatically changed the nature of sailing ships and sailing technique. Although some seamanship manuals were written in the 1700s, they cannot convey the intuitive sense that comes from firsthand experience. The Bounty's mission over the last four years has been to rebuild that firsthand knowledge and pass it on to a new generation of enthusiasts. But never have the Bounty' s training programs had such direct application as in the case of USS

ChiefJoe Wilson and nearly every member of the Constitution crew spent time training on board the Bounty. For several weeks in July and August 1996, the Bounty conducted training sail s in and aro und Boston Harbor-Constitution 's home waters. The navy seamen started by learning the more than 180 lines that control the Bounty's sixteen sai ls. Although Constitution is nearly twice the size of the Bounty, their rigs are virtually identical. For her anniversary sail, Constitution was only equipped with six major working sai ls: fore, main and mizzen topsails, spanker, jib and foretopmast staysail. With that configuration, she would be able to sail even in light winds and be able to conduct a wide range of maneuvers. The sails, totaling more than 12,000 square feet, were bought with $500,000 raised through a pen ny collection by the nation 's schoolchildren. For many of the Constitution's crew, sailing the Bounty provided their first experience climbing the ri g of tall ships to furl and unfurl sai ls-once considered everyday activities for seamen. "I never thought in a million years I ' d be doing this when I joined the

Constitution. Beginning in the summer of 1996, Commander Beck,

Constitution sailors man the helm a/Bounty (below) and haul away on her main topsail halyard (right) on a brisk spring day in Long Island Sound.