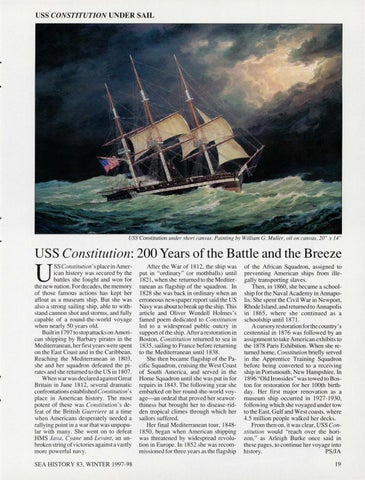 USS Constitution: 200 Years of the Battle and the Breeze SS Constitution' s place in AmerAfter the War of 1812, the ship was ican history was secured by the put in "ordinary" (or mothballs) until battles she fought and won for 1821, when she returned to the Mediterthe new nation. For decades, the memory ranean as flagship of the squadron. In of those famous actions has kept her 1828 she was back in ordinary when an afloat as a museum ship. But she was erroneous newspaper report said the US also a strong sailing ship, able to with- Navy was about to break up the ship. This stand cannon shot and storms, and fully article and Oliver Wendell Holmes 's capable of a round-the-world voyage famed poem dedicated to Constitution when nearly 50 years old. led to a widespread public outcry in Built in 1797 to stop attacks on Ameri- support of the ship. After a restoration in can shipping by Barbary pirates in the Boston, Constitution returned to sea in Mediterranean, herfirstyears were spent 1835, sailing to France before returning on the East Coast and in the Caribbean. to the Mediterranean until 1838. Reaching the Mediterranean in 1803, She then became flagship of the Pashe and her squadron defeated the pi- cific Squadron, crui sing the West Coast rates and she returned to the US in 1807. of South America, and served in the When war was declared against Great Home Squadron until she was put in for Britain in June 1812, several dramatic repairs in 1843. The following year she confrontations established Constitution's embarked on her round-the-world voyplace in American history. The most age-an ordeal that proved her seaworpotent of these was Constitution's de- thiness but brought her to disease-ridfeat of the British Guerriere at a time den tropical climes through which her when Americans desperately needed a sailors suffered. rallying point in a war that was unpopuHer final Mediterranean tour, 1848lar with many. She went on to defeat Âˇ 1850, began when American shipping HMS Ja va, Cyane and Levant, an un- was threatened by widespread revolubroken string of victories against a vastly tion in Europe. In 1852 she was recommore powerful navy . missioned for three years as the flagship

of the African Squadron, assigned to preventing American ships from illegally transporting slaves. Then, in 1860, she became a schoolship for the Naval Academy in Annapolis. She spent the Civil War in Newport, Rhode Island, and returned to Annapolis in 1865, where she continued as a schoolship until 1871. A cursory restoration for the country's centennial in 1876 was followed by an assignment to take American exhibits to the 1878 Paris Exhibition. When she returned home, Constitution briefly served in the Apprentice Training Squadron before being converted to a receiving ship in Portsmouth, New Hampshire. In 1896 "Old Ironsides" was towed to Boston for restoration for her lOOth birthday . Her first major renovation as a museum ship occurred in 1927-1930, following which she voyaged under tow to the East, Gulf and West coasts, where 4.5 million people walked her decks. From then on, it was clear, USS Constitution would "reach over the hori zon ," as Arleigh Burke once said in these pages, to continue her voyage into hi story. PS/JA 19