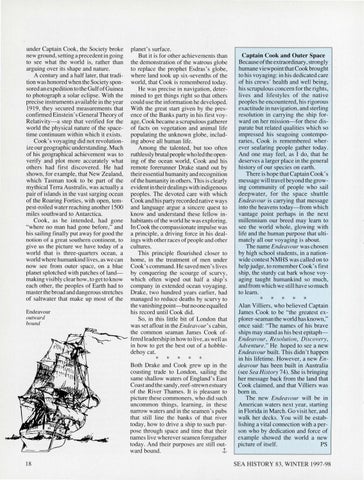 under Captain Cook, the Society broke new ground , setting a precedent in going to see what the world is, rather than arguing over its shape and nature. A century and a half later, that tradition was honored when the Society sponsored an expedition to the Gulf of Guinea to photograph a solar eclipse. With the precise instruments available in the year 1919, they secured measurements that confirmed Einstein ' s General Theory of Relativity-a step that verified for the world the physical nature of the spacetime continuum within which it exists. Cook 's voyaging did not revolutionize our geographic understanding. Much of his geographical achievement was to verify and plot more accurately what others had first discovered. He had shown , for example, that New Zealand , which Tasman took to be part of the mythical Terra Australis, was actually a pair of islands in the vast surging ocean of the Roaring Forties, with open , tempest-roiled water reaching another 1500 miles southward to Antarctica. Cook , as he intended , had gone " where no man had gone before," and his sailing finally put away for good the nolion of a great southern continent, to give us the picture we have today of a world that is three-quarters ocean, a world where humankind lives, as we can now see from outer space, on a blue planet splotched with patches of landmaking visibly clear how , to get to know each other, the peoples of Earth had to master the broad and dangerous stretches of saltwater that make up most of the Endeavour outward bound

planet ' s surface. But it is for other achievements than the demonstration of the watrous globe to replace the prophet Esdras ' s globe, where land took up six-sevenths of the world, that Cook is remembered today. He was precise in navigation , determined to get things right so that others could use the information he developed. With the great start given by the presence of the Banks party in his first voyage, Cook became a scrupulous gatherer of facts on vegetation and animal life populating the unknown globe, including above all human life. Among the talented , but too often ruthlessly brutal people who led the opening of the ocean world, Cook and his remote forerunner Drake stand out by their essential humanity and recognition of the humanity in others. This is clearly evident in their dealings with indigenous peoples. The devoted care with which Cook and his party recorded native ways and language argue a sincere quest to know and understand these fellow inhabitants of the world he was exploring. In Cook the compassionate impulse was a principle, a driving force in his dealings with other races of people and other cultures. This principle flourished closer to home, in the treatment of men under Cook ' scommand. He saved men ' s lives by conquering the scourge of scurvy , which often wiped out half a ship 's company in extended ocean voyaging. Drake, two hundred years earlier, had managed to reduce deaths by scurvy to the vanishing point- but no one equalled his record until Cook did . So, in this little bit of London that was set afloat in the Endeavour' s cabin , the common seaman James Cook offered leadership in how to live, as well as in how to get the best out of a hobbledehoy cat.

Both Drake and Cook grew up in the coasting trade to London, sailing the same shallow waters of England ' s East Coast and the sandy , reef-strewn estuary of the River Thames. It is pleasant to picture these commoners, who did such uncommon things, learning, in these narrow waters and in the seamen 's pubs that still line the banks of that river today , how to drive a ship to such purpose through space and time that their names live wherever seamen foregather today. And their purposes are still out..t ward bound. 18

Captain Cook and Outer Space Because of the extraordinary, strongly humane viewpoint that Cook brought to his voyaging: in his dedicated care of his crews' health and well being, his scrupulous concern for the rights, lives and lifestyles of the native peoples he encountered, his rigorous exactitude in navigation, and sterling resolution in carrying the ship forward on her mission- for these disparate but related qualities which so impressed his seagoing contemporaries, Cook is remembered wherever seafaring people gather today. And one may feel , as I do, that he deserves a larger place in the general history of our species on earth. There is hope that Captain Cook 's message will travel beyond the growing community of people who sail deepwater, for the space shuttle Endeavour is carrying that message into the heavens today-from which vantage point perhaps in the next millennium our breed may learn to see the world whole, glowing with life and the human purpose that ultimately all our voyaging is about. The name Endeavour was chosen by high school students , in a nationwide contest NMHS was called on to help judge, to remember Cook's first ship, the sturdy cat bark whose voyaging taught humankind so much , and from which we still have so much to learn.

Alan Villiers, who believed Captain James Cook to be "the greatest ex plorer-seaman the world has known," once said: "The names of his brave ships may stand as his best epitaphEndeavour, Resolution , Discovery, Adventure." He hoped to see a new Endeavour built. This didn't happen in his lifetime. However, a new Endeavour has been built in Australia (see Sea History 74). She is bringing her message back from the land that Cook claimed, and that Villiers was born in. The new Endeavour will be in American waters next year, starting in Florida in March. Go visit her, and walk her decks. You will be establishing a vital connection with a person who by dedication and force of example showed the world a new PS picture of itself.