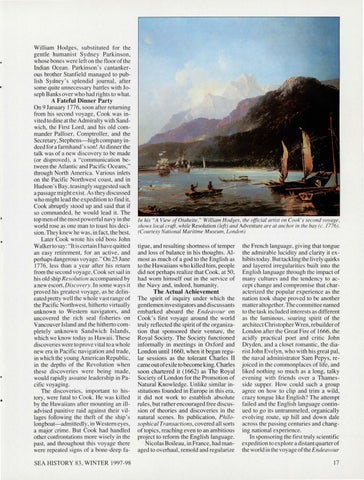 William Hodges , substituted for the gentle hum ani st Sydney Parkin son, whose bones were left on the floor of the Indian Ocean. Parkinson &#39; s cantankerous brother Stanfield managed to publish Sydney&#39;s splendid journal, after some quite unnecessary battles with Joseph Banks over who had rights to what. A Fateful Dinner Party On 9 January 1776, soon after returning from his second voyage, Cook was invited to dine at the Admiralty with Sandwich, the First Lord, and his old commander Palli ser, Comptroller, and the Secretary, Stephens-high company indeed for a farmhand&#39; s son! At dinner the talk was of a new discovery to be made (or di sproved), a &quot;comm unication between the Atlantic and Pacific Oceans,&quot; through North America. Various inlets on the Pacific Northwest coast, and in Hudson&#39;s Bay, teasingly suggested such a passage might exist. As they discussed who mi ght lead the exped ition to find it, Cook abruptly stood up and said that if so commanded , he would lead it. The top men of the most powerful navy in the world rose as one man to toast his decision. They knew he was, in fact, the best. Later Cook wrote his old &#39;boss John Walkertosay: &quot;It is certain I have quitted an easy retirement, for an active, and perhaps dangerous voyage.&quot; On 25 June 1776, less than a year after his return from the second voyage, Cook set sail in his old ship Resolution accompanied by a new escort, Discovery. In some ways it proved hi s greatest voyage, as he delineated pretty well the whole vast range of the Pacific Northwest, hitherto virtually unknown to Western navigators, and uncovered the rich seal fisheries on Vancouver Island and the hitherto completely unknown Sandwich Islands, which we know today as Hawaii. These discoveries were to prove vital to a whole new era in Pacific nav igation and trade, in which the young American Republi c, in the depths of the Revolution when these discoveries were being made, would rapidly assume leadership in Pacific voyaging. The discoveries, important to hi story, were fatal to Cook. He was killed by the Hawaiians after mounting an illadvised puniti ve raid against their vi llages following the theft of the ship &#39; s longboat-admittedly, in Western eyes, a major crime. But Cook had handl ed other confrontations more wisely in the past, and throughout this voyage there were repeated signs of a bone-deep faSEA HISTORY 83, WINTER 1997-98

ti gue, and resulting shortness of temper and loss of balance in his thoughts. Almost as much of a god to the Engli sh as to the Hawaiians who killed him, people did not perhaps realize that Cook, at 50, had worn him self out in the service of the Navy and , indeed, humanity. The Actual Achievement The spirit of inquiry under which the gentlemen investigators and di scussants embarked aboard the Endeavour on Cook &#39; s first voyage around the world trul y reflected the spirit of the organization that sponsored their venture, the Royal Society. The Society functioned informally in meetings in Oxford and London until 1660, when it began regular sessions as the tolerant Charles II came out of exile to become king. Charles soon chartered it (1662) as The Royal Society of London for the Promotion of Natural Knowledge. Unlike similar institutions founded in Europe in thi s era, it did not work to establish absolute rules , but rather encouraged free discussion of theories and discoveri es in the natural scenes. Its publication, Philosophical Transactions, covered all sorts of topics, reaching even to an ambitious project to reform the English language. Nicolas Boileau, in France, had managed to overhaul , remold and regularize

the French language, giving that tongue the admirable lucidity and clarity it exhibits today. But tackling the lively quirks and layered irregularities built into the English language through the impact of many cultures and the tendency to accept change and compromise that characteri zed the popular experience as the nation took shape proved to be another matter altogether. The committee named to the task included interests as different as the luminous, soaring spirit of the architect Christopher Wren, rebuilder of London after the Great Fire of 1666, the acidly practical poet and critic John Dryden, and a closet romantic, the diarist John Evelyn, who with hi s great pal, the naval administrator Sam Pepys, rejoiced in the commonplaces of life, and liked nothing so much as a long, talky evening with friends over a Thamesside supper. How could such a group ag ree on how to clip and trim a wild , crazy tongue like English? The attempt fa iled and the English language continued to go its untrammeled , organically evolving route, up hill and down dale across the passing centuries and changing national experience. In sponsoring the first truly scientific expedition to explore a distant quarter of the world in the voyage of the Endeavour 17