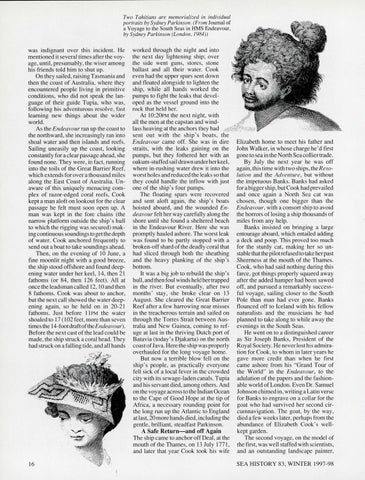 Two Tahitians are memorialized in individual portraits by Sydney Parkinson. (From Journal of

a Voyage to the South Seas in HMS Endeavour, by Sydney Parkinson (London , 1984 ))

was indignant over this incident. He mentioned it several times after the voyage, until, presumably , the wiser among his friends told him to shut up. On they sailed, raising Tasmania and then the coast of Australia, where they encountered people living in primitive conditions, who did not speak the language of their guide Tupia, who was, following his adventurous resolve, fast learning new things about the wider world. As the Endeavour ran up the coast to the northward, she increasingly ran into shoal water and then islands and reefs. Sailing uneasily up the coast, looking constant) y for a clear passage ahead, she found none. They were, in fact, running into the toils of the Great Barrier Reef, which extends for over a thousand miles along the East Coast of Australia. Unaware of this uniquely menacing complex of razor-edged coral reefs, Cook kept a man aloft on lookout for the clear passage he felt must soon open up. A man was kept in the fore chains (the narrow platform outside the ship's hull to which the rigging was secured) making continuous soundings to get the depth of water. Cook anchored frequently to send out a boat to take soundings ahead. Then, on the evening of 10 June, a fine moonlit night with a good breeze, the ship stood offshore and found deepening water under her keel, 14, then 21 fathoms (or 84, then 126 feet) . All at once the leadsman called 12, 10 and then 8 fathoms. Cook was about to anchor, but the next call showed the water deepening again, so he held on in 20-21 fathoms. Just before llPM the water shoaled to 17 ( 102 feet, more than seven times the 14-footdraftoftheEndeavour). Before the next oast of the lead could be made, the ship struck a coral head. They had struck on a falling tide, and all hands

worked through the night and into the next day lightening ship; over the side went guns , stores , stone ballast and all their water. Cook even had the upper spars sent down and floated alongside to lighten the ship, while all hands worked the pumps to fight the leaks that developed as the vessel ground into the rock that held her. At 10:20PM the next night, with all the men at the capstan and windlass heaving at the anchors they had sent out with the ship's boats , the Endeavour came off. She was in dire straits, with the leaks gaining on the pumps, but they fathered her with an oakum-stuffed sail drawn under her keel, where in-rushing water drew it into the worst holes and reduced the leaks so that they could handle the inflow with just one of the ship's four pumps. The floating spars were recovered and sent aloft again, the ship ' s boats hoisted aboard, and the wounded Endeavour felt her way carefully along the shore until she found a sheltered beach in the Endeavour River. Here she was promptly hauled ashore. The worst leak was found to be partly stopped with a broken-off shard of the deadly coral that had sliced through both the sheathing and the heavy planking of the ship ' s bottom. It was a big job to rebuild the ship ' s hull, and then foul winds held her trapped in the river. But eventually, after two months ' stay, she broke clear on 13 August. She cleared the Great Barrier Reef after a few harrowing near misses in the treacherous terrain and sailed on through the Torres Strait bet.w een Australia and New Guinea, coming to refuge at last in the thriving Dutch port of Batavia (today's Djakarta) on the north coastofJava. Here the ship was properly overhauled for the long voyage home. But now a terrible blow fell on the ship ' s people, as practically everyone fell sick of a local fever in the crowded city with its sewage-laden canals. Tupia and his servant died, among others. And on the voyage across to the Indian Ocean to the Cape of Good Hope at the tip of Africa, a necessary rounding point for the long run up the Atlantic to England at last, 20 more hands died, including the gentle, brilliant, steadfast Parkinson.

A Safe Return-and off Again The ship came to anchor off Deal, at the mouth of the Thames, on 13 July 1771 , and later that year Cook took his wife

Elizabeth home to meet his father and John Walker, in whose charge he ' d first gone to sea in the North Sea collier trade. By July the next year he was off again, this time with two ships , the Resolution and the Adventure, but without the impetuous Banks. Banlcs had asked for a bigger ship, but Cook had prevailed and once again a North Sea cat was chosen, though one bigger than the Endeavour, with a consort ship to avoid the horrors of losing a ship thousands of miles from any help. Banks insisted on bringing a large entourage aboard, which entailed adding a deck and poop. This proved too much for the sturdy cat, making her so unstable that the pilot refused to take her past Sheerness at the mouth of the Thames. Cook, who had said nothing during this farce, got things properly squared away after the added hamper had been sawed off, and pursued a remarkably successful voyage, sailing closer to the South Pole than man had ever gone. Banlcs flounced off to Iceland with his fellow naturalists and the musicians he had planned to take along to while away the evenings in the South Seas. He went on to a distinguished career as Sir Joseph Banlcs, President of the Royal Society. He never lost hi s admiration for Cook, to whom in later years he gave more credit than when he first came ashore from his "Grand Tour of the World" in the Endeavour, to the adulation of the papers and the fashionable world of London. Even Dr. Samuel Johnson chimed in, writing a Latin verse for Banks to engrave on a collar for the goat who had survived her second circumnavigation. The goat, by the way, died a few weeks later, perhaps from the abundance of Elizabeth Cook 's wellkept garden. The second voyage, on the model of the first, was well staffed with scientists, and an outstanding landscape painter, SEA HISTORY 83 , WINTER 1997-98