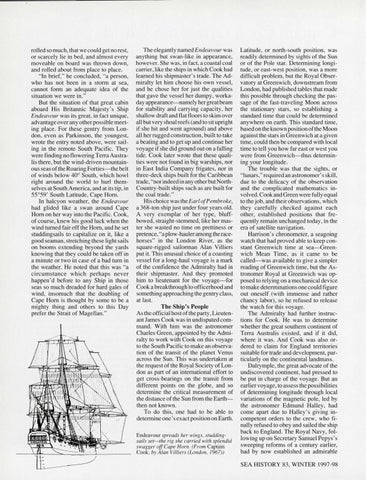 rolled so much, that we could get no rest, or scarcely lie in bed, and almost every moveable on board was thrown down, and rolled about from place to place. "In brief," he concluded, "a person, who has not been in a storm at sea, cannot form an adequate idea of the situation we were in." But the situation of that great cabin aboard His Britannic Majesty's Ship Endeavour was its great, in fact unique, advantage over any other possible meeting place. For these gentry from London, even as Parkinson, the youngest, wrote the entry noted above, were sailing in the remote South Pacific. They were finding no flowering Terra Australis there, but the wind-driven mountainous seas of the Roaring Forties-the belt of winds below 40Â° South, which howl right around the world to hurl themselves at South America, and at its tip, in 55Â°59 ' South Latitude, Cape Hom. In halcyon weather, the Endeavour had glided like a swan around Cape Hom on her way into the Pacific. Cook, of course, knew his good luck when the wind turned fair off the Horn, and he set studdingsails to capitalize on it, like a good seaman, stretching these light sails on booms extending beyond the yards knowing that they could be taken off in a minute or two in case of a bad turn in the weather. He noted that this was "a circumstance which perhaps never happen ' d before to any Ship in those seas so much dreaded for hard gales of wind, insomuch that the doubling of Cape Horn is thought by some to be a mighty thing and others to this Day prefer the Strait of Magellan."

The elegantly named Endeavour was anything but swan-like in appearance, however. She was, in fact, a coastal coal carrier, like the ships in which Cook had learned his shipmaster's trade. The Admiralty let him choose his own vessel, and he chose her for just the qualities that gave the vessel her dumpy, workaday appearance-name Iy her great beam for stability and carrying capacity, her shallow draft and flat floors to skim over all but very shoal reefs (and to sit upright if she hit and went aground) and above all her rugged construction, built to take a beating and to get up and continue her voyage if she did ground out on a falling tide. Cook later wrote that these qualities were not found in big warships, nor in East India Company frigates, nor in three-deck ships built for the Caribbean trade, "nor indeed in any other butNorthCountry-built ships such as are built for the coal trade." His choice was the Earl ofPembroke, a 368-ton ship just under four years old. A very exemplar of her type, bluffbowed , straight-stemmed, like her master she wasted no time on prettiness or pretence, "a plow-hauler among the racehorses" in the London River, as the square-rigged sailorman Alan Villiers put it. This unusual choice of a coasting vessel for a long-haul voyage is a mark of the confidence the Admiralty had in their shipmaster. And they promoted him to lieutenant for the voyage-for Cook a breakthrough.to officerhood and something approaching the gentry class, at last. The Ship's People As the official host of the party , Lieutenant James Cook was in undisputed command. With him was the astronomer Charles Green , appointed by the Admiralty to work with Cook on thi s voyage to the South Pacific to make an observation of the transit of the planet Venus across the Sun. This was undertaken at the request of the Royal Society of London as part of an international effort to get cross-bearings on the transit from different points on the globe, and so determine the critical measurement of the distance of the Sun from the Earththen not known . To do this, one had to be able to determine one's exact position on Earth. Endeavour spreads her wings , studdingsails set-the rig she carried with splendid swagger off Cape Hom. (From Captain Cook, by Alan Villiers (London, 1967))

Latitude, or north-south position , was readily determined by sights of the Sun or of the Pole star. Determining longitude, or east-west position, was a more difficult problem, but the Royal Observatory at Greenwich, downstream from London , had published tables that made this possible through checking the passage of the fast-traveling Moon across the stationary stars, so establishing a standard time that could be determined anywhere on earth. This standard time, based on the known position of the Moon against the stars in Greenwich at a given time, could then be compared with local time to tell you how far east or west you were from Greenwich-thus determining your longitude. The trouble was that the sights, or "lunars," required an astronomer's skill, due to the delicacy of the observation and the complicated mathematics involved. Cook and Green were fully equal to the job, and their observations, which they carefully checked against each other, established positions that frequently remain unchanged today, in the era of satellite navigation. Harrison 's chronometer, a seagoing watch that had proved able to keep constant Greenwich time at sea-Greenwich Mean Time, as it came to be called-was available to give a simpler reading of Greenwich time, but the Astronomer Royal at Greenwich was opposed to relying on a mechanical device to make determinations one could figure out oneself (with immense and rather chancy labor), so he refused to release the watch for this voyage. The Admiralty had further instructions for Cook. He was to determine whether the great southern continent of Terra Australis existed, and if it did , where it was. And Cook was also ordered to claim for England territories suitable for trade and development, particularly on the continental landmass. Dalrymple, the great advocate of the undiscovered continent, had pressed to be put in charge of the voyage. But an earlier voyage, to assess the possibilities of determining longitude through local variations of the magnetic pole, led by the astronomer Edmund Halley, had come apart due to Halley's giving incompetent orders to the crew, who finally refused to obey and sailed the ship back to England. The Royal Navy, following up on Secretary Samuel Pepys 's sweeping reforms of a century earlier, had by now established an admirable SEA HISTORY 83, WINTER 1997-98