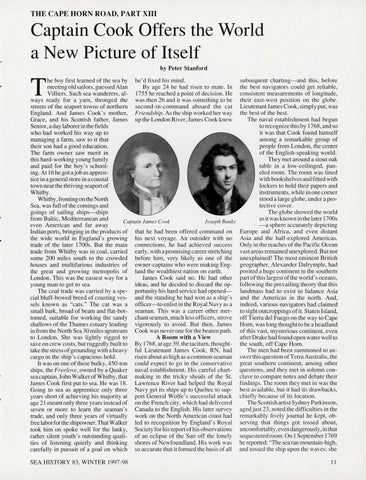 Captain Cook Offers the World a New Picture of Itself by Peter Stanford he boy first learned of the sea by he'd fixed hi s mind. meeting old sailors, guessed Alan By age 24 he had risen to mate. In Villiers. Such sea wanderers, al- 1755 he reached a point of decision . He ways ready for a yam, thronged the was then 26 and it was something to be streets of the seaport towns of northern second -in-command aboard the cat England. And James Cook's mother, Friendship. As the ship worked her way Grace, and his Scottish father, James up the London Ri ver, Jam es Cook knew Senior, a day laborer in the fields who had worked his way up to managing a farm , saw to it that their son had a good education . The farm owner saw merit in thi s hard-working young famil y and paid for the boy's schooling. At 16he gotajobasapprentice in a general store in a coastal town near the thriving seaport of Whitby. Whitby , fronting on the North Sea, was full of the comings and goings of sailing ships-ships from Baltic, Mediterranean and Capwin James Cook Joseph Banks even American and far away Indian ports, bringing in the products of that he had been offered command on the wide world in England ' s growing his next voyage. An outsider with no trade of the later 1700s. But the main connections, he had achieved success trade from Whitby was in coal, carried early, with a promising career stretching some 200 miles south to the crowded before him, very likely as one of the houses and multifarious industries of owner-captains who were making Engthe great and growing metropolis of land the wealthiest nati on on earth. James Cook said no. He had other London. This was the easiest way for a ideas, and he decided to discard the opyoung man to get to sea. The coal trade was carried by a spe- portunity his hard service had openedcial bluff-bowed breed of coasting ves- and the standing he had won as a ship 's sels known as "cats. " The cat was a officer-to enli st in the Royal Navy as a small bark, broad of beam and flat-bot- seaman. This was a career other mertomed, suitable for working the sandy chant seamen , much less officers, strove shallows of the Thames estuary leading vigorously to avoid . But then, James in from the North Sea 30 miles upstream Cook was never one for the beaten path. to London. She was li ghtly rigged to A Room with a View save on crew costs, but ruggedly built to By 1768, atage 39, the taciturn , thoughttake the stress of grounding with a heavy ful Lieutenant James Cook, RN, had cargo in the ship 's capacious hold . risen about as high as a common seaman It was on one of these bulky, 450-ton could expect to go in the conservative ships, the Freelove, owned by a Quaker naval establishment. His careful chartsea captain, John Walker of Whitby, that making in the tricky shoals of the St. James Cook first put to sea. He was 18. Lawrence River had helped the Royal Going to sea as apprentice only three Navy get its ships up to Quebec to supyears short of achiev ing hi s majority at port General Wolfe 's successfu l attack age 21 meant only three years instead of on the French city, which had delivered seven or more to learn the seaman 's Canada to the English. His later survey trade, and only three years of virtually work on the North American coast had free labor for the shipowner. That Walker led to recognition by England's Royal took him on spoke well for the lanky, Society for his report of his observations rather silent youth 's outstanding quali - of an eclipse of the Sun off the lonely ties of listening quietly and thinking shores of Newfoundland. Hi s work was carefully in pursuit of a goal on which so accurate that it formed the basis of all

subseq uent charting-and thi s, before the best nav igators could get reliable, consistent measurements of longitude, their east-west position on the globe. Lieutenant James Cook, simply put, was the best of the best. The naval establishment had begun to recogni ze thi s by 1768, and so it was that Cook found himself among a remarkable group of people from London, the center of the English-speaking world. They met around a stout oak table in a low-ceilinged, paneled room. The room was lined with bookshelves and fitted with lockers to hold their papers and instruments, while in one comer stood a large globe, under a protective cover. The globe showed the world as it was known in the later 1700s -a sphere accurately depicting E urope and Africa, and even distant Asia and the half-ex plored Americas. Only in the reaches of the Pacific Ocean vast areas remained unexplored. But not unexplained! The most eminent British geographer, Alexander Dalrymple, had posited a huge continent in the southern part of this largest of the world's oceans, following the prevailing theory that thi s iandmass had to exist to balance Asia and the Americas in the north . And, indeed, various navigators had claimed to sight outcroppings of it. Staten Island, off Tierra del Fuego on the way to Cape Hom, was long thought to be a headland of this vast, mysterious continent. even after Drake had found open water well to the south, off Cape Hom. The men had been summoned to answer this question of Terra Australi s, the great southern continent, among other questions, and they met in so lemn conclave to compare notes and debate their findings . The room they met in was the best available, but it had its drawbacks, chiefly because of its location. The Scottish artist Sydney Parkinson, aged just 23, noted the difficulties in the remarkably lively journal he kept, observi ng that things got tossed about, uncomfortably, even dangerously, in that sequestered room. On 1September1769 he reported: "The sea ran mountain-high, and tossed the ship upon the waves: she 11