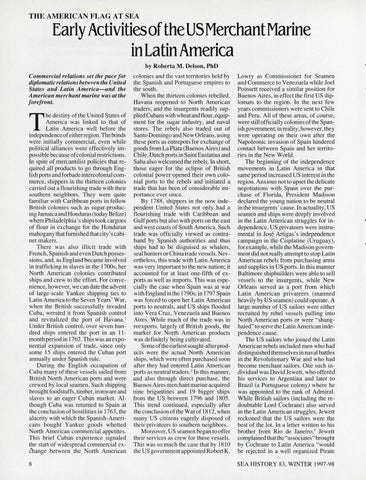 Early Activities of the US Merchant Marine in Latin America by Roberta M. Delson, PhD

Commercial relations set the pace for diplomatic relations between the United States and Latin America-and the American merchant marine was at the forefront.

he destiny of the United States of America was linked to that of Latin America well before the independence of eitherregion. The bonds were initially commercial, even while political alliances were effectively impossible because of colonial restrictions. In spite of mercantilist policies that required all products to go through English ports and forbade intercolonial commerce, shippers in the thirteen colonies carried out a flourishing trade with their southern neighbors. They were quite familiar with Caribbean ports in fellow British colonies such as sugar-producing Jamaicaand Honduras (today Belize) where Philadelphia&#39;s ships took cargoes of flour in exchange for the Honduran mahogany that furnished that city&#39;s cabinet makers. There was also illicit trade with French, Spanish and even Dutch possessions, and, as England became involved in trafficking in slaves in the 1700s, her North American colonies contributed ships and crew to the effort. For convenience, however, we can date the advent of large-scale Yankee shipping ties to Latin America to the Seven Years&#39; War, when the British successfully invaded Cuba, wrested it from Spanish control and revitalized the port of Havana. 1 Under British control, over seven hundred Âˇ ships entered the port in an 11month period in 1762. This was an exponential expansion of trade, since only some 15 ships entered the Cuban port annually under Spanish rule. During the English occupation of Cuba many of these vessels sailed from British North American ports and were crewed by local seamen. Such shipping brought foodstuffs, timber, ironware and slaves to an eager Cuban market. Although Cuba was returned to Spain at the conclusion of hostilities in 1763, the alacrity with which the Spanish-Americans bought Yankee goods whetted North American commercial appetites. This brief Cuban experience signaled the start of widespread commercial excnange between the North American 8

colonies and the vast territories held by the Spanish and Portuguese empires to the south. When the thirteen colonies rebelled, Havana reopened to North American traders, and the insurgents readily supplied Cubans with wheat and flour, equipment for the sugar industry, and naval stores. The rebels also traded out of Santo Domingo and New Orleans, using these ports as entrepots for exchange of goods from La Plata (Buenos Aires) and Chile. Dutch ports in Saint Eustati us and Saba also welcomed the rebels. In short, those eager for the eclipse of British colonial power opened their own colonial ports to the rebels and initiated a trade that has been of considerable importance ever since. By 1788, shippers in the now independent United States not only had a flourishing trade with Caribbean and Gulf ports but also with ports on the east and west coasts of South America, Such trade was officially viewed as contraband by Spanish authorities and thus ships had to be disguised as whalers, seal hunters or China trade vessels. Nevertheless, this trade with Latin America was very important to the new nation; it accounted for at least one-fifth of exports as well as imports. This was especially the case when Spain was at war with England in the 1790s; in 1797 Spain was forced to open her Latin American ports to neutrals, and US ships flooded into Vera Cruz, Venezuela and Buenos Aires. While much of the trade was in reexports, largely of British goods, the market for North American products was definitely being cultivated. Some of the earliest sought-afterproducts were the actual North American ships, which were often purchased soon after they had entered Latin American ports as neutral traders .2 In this manner, and also through direct purchase, the Buenos Aires merchant marine acquired nine brigantines and 19 bigger ships from the US between 1796 and 1805. This trend continued, especially after the conclusion of the Warof1812, when many US citizens eagerly disposed of their privateers to southern neighbors. Moreover, US seamen began to offer their services as crew for these vessels. This was so much the case that by 1810 the US government appointed Robert K.

Lowry as Commissioner for Seamen and Commerce to Venezuela while Joel Poinsett received a similar position for Buenos Aires, in effect the first US diplomats to the region. In the next few years commissioners were sent to Chile and Peru. All of these areas, of course, were still officially colonies of the Spanish government; in reality, however, they were operating on their own after the Napoleonic invasion of Spain hindered contact between Spain and her territories in the New World. The beginning of the independence movements in Latin America in that same period increased US interest in the region. Anxious not to upset the delicate negotiations with Spain over the purchase of Florida, President Madison declared the young nation to be neutral in the insurgents&#39; cause. In actuality-, US seamen and ships were deeply involved in the Latin American struggles for independence. US privateers were instrumental in Jose Artigas &#39;s independence campaign in the Cisplatine (Uruguay), for example, while the Madison government did not really attempt to stop Latin American rebels from purchasing arms and supplies in US ports. In this manner Baltimore shipbuilders were able to sell vessels to the insurgents, while New Orleans served as a port from which Latin American privateers (manned heavily by US seamen) could operate. A large number of US sailors were either recruited by rebel vessels pulling into North American ports or were &quot;shanghaied&quot; to serve the Latin American independence cause. The US sailors who joined the Latin American rebels included men who had distinguished themselves in naval battles in the Revolutionary War and who had become merchant sailors. One such individual was David Jewett, who offered his services to Argentina and later to Brazil (a Portuguese colony) where he was appointed to the rank of Admiral. While British sailors (including the redoubtable Lord Cochrane) also served in the Latin American struggles, Jewett reckoned that the US sailors were the best of the lot. In a letter written to his brother from Rio de Janeiro, 3 Jewett complained thatthe &quot;associates&quot;brought by Cochrane to Latin America &quot;would be rejected in a well organized Pirate SEA HISTORY 83, WINTER 1997-98