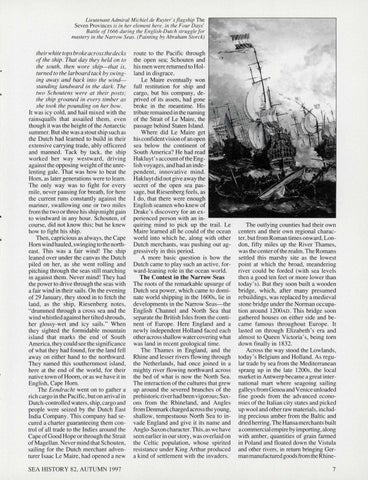 Lieutenant Admiral Michie/ de Ruyter' s flagship The Seven Provinces is in her element here, in the Four Days' Battle of 1666 during the English-Dutch struggle for mastery in the Narrow Seas . (Painting by Abraham Storck)

their white tops broke across the decks of the ship. That day they held on to the south, then wore ship-that is, turned to the larboard tack by swinging away and back into the win~ standing landward in the dark. The two Schoutens were at their posts; the ship groaned in every timber as she took the pounding on her bow. It was icy cold, and hail mixed with the rainsqualls that assailed them, even though it was the height of the Antarctic summer. But she was a stout ship such as the Dutch had learned to build in their extensive carrying trade, ably officered and manned. Tack by tack, the ship worked her way westward, driving against the opposing weight of the unrelenting gale. That was how to beat the Hom, as later generations were to learn. The only way was to fight for every mile, never pausing for breath, for here the current runs constantly against the mariner, swallowing one or two miles from the two or three his ship might gain to windward in any hour. Schouten, of course, did not know this; but he knew how to fight his ship. Then, capricious as always, the Cape Hom wind hauled, swinging to the northeast. This was a fair wind! The ship leaned over under the canvas the Dutch piled on her, as she went rolling and pitching through the seas still marching in against them. Never mind! They had the power to drive through the seas with a fair wind in their sails. On the evening of 29 January, they stood in to fetch the land, as the ship, Riesenberg notes, "drummed through a cross sea and the wind whistled against her tilted shrouds, her glossy-wet and icy sails." When they sighted the formidable mountain island that marks the end of South America, they could see the significance of what they had found, for the land fell away on either hand to the northward. They named this southernmost island, here at the end of the world, for their native town of Hoom, or as we have it in English, Cape Horn. The Eendracht went on to gather a rich cargo in the Pacific, but on arrival in Dutch-controlled waters , ship, cargo and people were seized by the Dutch East India Company. This company had secured a charter guaranteeing them control of all trade to the Indies around the Cape of Good Hope or through the Strait of Magellan. Never mind that Schouten, sailing for the Dutch merchant adventurer Isaac Le Maire, had opened a new SEA HISTORY 82, AUTUMN 1997

route to the Pacific through ',._ the open sea; Schouten and his men were returned to Holland in disgrace. Le Maire eventually won full restitution for ship and cargo, but his company, deprived of its assets, had gone broke in the meantime. His ~.:i.....-- ~~Âˇ tribute remained in the naming of the Strait of Le Maire, the passage behind Staten Island. Where did Le Maire get his confident vision of an open sea below the continent of South America? He had read Hakluyt' s account of the English voyages, and had an independent, innovative mind. Hakluyt did not give away the secret of the open sea passage, but Riesenberg feels, as I do, that there were enough English seamen who knew of Drake's discovery for an ex perienced person with an inquiring mind to pick up the trail. Le Maire learned all he could of the ocean world into which he, along with other Dutch merchants , was pushing out aggressively in this period. A more basic question is how the Dutch came to play such an active, forward-leaning role in the ocean world. The Contest in the Narrow Seas The roots of the remarkable upsurge of Dutch sea power, which came to dominate world shipping in the 1600s, lie in developments in the Narrow Seas-the English Channel and North Sea that separate the British Isles from the continent of Europe. Here England and a newly independent Holland faced each other across shallow water covering what was land in recent geological time. The Thames in England, and the Rhine and lesser rivers flowing through the Netherlands, had once joined in a mighty river flowing northward across the bed of what is now the North Sea. The interaction of the cultures that grew up around the severed branches of the prehistoric river had been vigorous; Saxons from the Rhineland, and Angles from Denmark charged across the young, shallow, tempestuous North Sea to invade England and give it its name and Anglo-Saxon character. This, as we have seen earlier in our story, was overlaid on the Celtic population, whose spirited resistance under King Arthur produced a kind of settlement with the invaders.

The outlying counties had their own centers and their own regional character, but from Roman times onward, London, fifty miles up the River Thames, was the center of the realm. The Romans settled this marshy site as the lowest point at which the broad, meandering river could be forded (with sea levels then a good ten feet or more lower than today's) . But they soon built a wooden bridge, which, after many presumed rebuildings, was replaced by a medieval stone bridge under the Norman occupation around 1200AD. This bridge soon gathered houses on either side and became famou s throughout Europe. It lasted on through Elizabeth' s era and almost to Queen Victoria's, being tom down finally in 1832. Across the way stood the Lowlands, today 's Belgium and Holland. As regular trade by sea from the Mediterranean sprang up in the late 1200s, the local market in Antwerp became a great international mart where seagoing sailing galleys from Genoa and Venice unloaded fine goods from the advanced economies of the Italian city states and picked up wool and other raw materials, including precious amber from the Baltic and dried herring. The Hansa merchants built a commercial empire by importing, along with amber, quantities of grain farmed in Poland and floated down the Vistula and other rivers, in return bringing German manufactured goods from the Rhine7