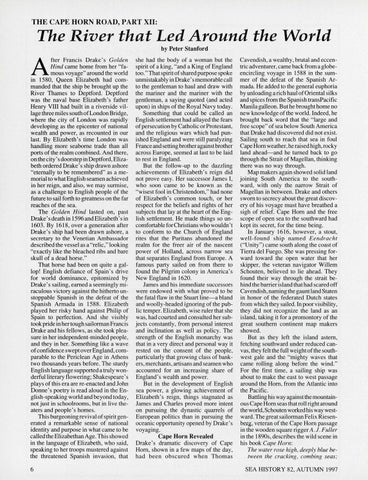 The River that Led Around the World by Peter Stanford fter Francis Drake &#39;s Golden Hind came home from her &quot;famous voyage&quot; around the world in 1580, Queen Elizabeth had commanded that the ship be brought up the River Thames to Deptford. Deptford was the naval base Elizabeth&#39;s father Henry VIII had built in a riverside village three miles south of London Bridge, where the city of London was rapidly developing as the epicenter of national wealth and power, as recounted in our last. By Elizabeth&#39;s time London was handling more seaborne trade than all ports of the realm combined. And there, on the city &#39; s doorstep in Deptford, Elizabeth ordered Drake &#39;s ship drawn ashore &quot;eternally to be remembered&quot; as a memorial to what English seamen achieved in her reign, and also, we may surmise, as a challenge to English people of the future to sail forth to greatness on the far reaches of the sea. The Golden Hind lasted on, past Drake&#39;s death in 1596 and Elizabeth&#39;s in 1603. By 1618, over a generation after Drake&#39;s ship had been drawn ashore, a secretary to the Venetian Ambassador described the vessel as a &quot;relic,&quot; looking &quot;exactly like the bleached ribs and bare skull of a dead horse.&quot; That horse had been on quite a gallop! English defiance of Spain&#39;s drive for world dominance, epitomized by Drake &#39;s sailing, earned a seemingly miraculous victory against the hitherto unstoppable Spanish in the defeat of the Spanish Armada in 1588. Elizabeth played her risky hand against Philip of Spain to perfection. And she visibly took pride in her tough sailorman Francis Drake and his fellows, as she took pleasure in her independent-minded people, and they in her. Something like a wave of confidence swept over England, comparable to the Periclean Age in Athens two thousands years before. The sturdy English language supported a truly wonderful literary flowering; Shakespeare&#39;s plays of this era are re-enactâ&amp;#x201A;Źd and John Donne &#39;s poetry is read aloud in the English-speaking world and beyond today, not just in schoolrooms, but in live theaters and people&#39;s homes. This burgeoningrevivalof spirit generated a remarkable sense of national identity and purpose in what came to be called the Elizabethan Age. This showed in the language of Elizabeth, who said, speaking to her troops mustered against the threatened Spanish invasion , that

she had the body of a woman but the spirit of a king, &quot;and a King of England too.&quot; That spirit of shared purpose spoke unmistakably in Drake &#39;s memorable call to the gentleman to haul and draw with the mariner and the mariner with the gentleman, a saying quoted (and acted upon) in ships of the Royal Navy today. Something that could be called an English settlement had allayed the fears of persecution by Catholic or Protestant, and the religious wars which had punished England and were still paralyzing France and setting brother against brother across Europe, seemed at last to be laid to rest in England. But the follow-up to the dazzling achievements of Elizabeth &#39;s reign did not prove easy. Her successor James I, who soon came to be known as the &quot;wisest fool in Christendom,&quot; had none of Elizabeth&#39;s common touch, or her respect for the beliefs and rights of her subjects that lay at the heart of the Eng1ish settlement. He made things so uncomfortable for Christians who wouldn &#39;t to conform to the Church of England rites that the Puritans abandoned the realm for the freer air of the nascent power of Holland, across narrow sea that separates England from Europe. A famous party sailed on from there to found the Pilgrim colony in America&#39;s New England in 1620. James and his immediate successors were endowed with what proved to be the fatal flaw in the Stuart line-a bland and woolly-headed ignoring of the public temper. Elizabeth, wise ruler that she was, had courted and consulted her subjects constantly, from personal interest and inclination as well as policy. The strength of the English monarchy was that in a very direct and personal way it rested on the consent of the people, particularly that growing class of bankers, merchants, artisans and seamen who accounted for an increasing share of England&#39;s wealth and power. But in the development of English sea power, a glowing achievement of Elizabeth&#39;s reign, things stagnated as James and Charles proved more intent on pursuing the dynastic quarrels of European politics than in pursuing the oceanic opportunity opened by Drake &#39;s voyaging. Cape Horn Revealed Drake &#39;s dramatic discovery of Cape Hom, shown in a few maps of the day, had been obscured when Thomas

Cavendish, a wealthy, brutal and eccentric adventurer, came back from a globeencircling voyage in 1588 in the summer of the defeat of the Spanish Armada. He added to the general euphoria by unloading a rich haul of Oriental silks and spices from the Spanish transPacific Manila galleon.But he brought home no new knowledge of the world. Indeed, he brought back word that the &quot;large and free scope&quot; of sea below South America that Drake had discovered did not exist. Sailing south to reach that sea in foul Cape Hom weather, he raised high, rocky land ahead-and he turned back to go through the Strait of Magellan, thinking there was no way through. Map makers again showed solid land joining South America to the southward, with only the narrow Strait of Magellan in between. Drake and others sworn to secrecy about the great discovery of his voyage must have breathed a sigh of relief. Cape Hom and the free scope of open sea to the southward had kept its secret, for the time being. In January 1616, however, a stout, well-found ship named Eendracht (&quot;Unity&quot;) came south along the coast of Tierra del Fuego. She was pressing forward toward the open water that her skipper, the veteran navigator Willem Schouten, believed to lie ahead. They found their way through the strait behind the barrier island that had scared off Cavendish, naming the gaunt land Staten in honor of the federated Dutch states from which they sailed. In poor visibility, they did not recognize the land as an island, taking it for a promontory of the great southern continent map makers showed. But as they left the island astern, fetching southward under reduced canvas, they felt the full weight of the southwest gale and the &quot;mighty waves that came rolling along before the wind.&quot; For the first time, a sailing ship was about to make the east to west passage around the Hom, from the Atlantic into the Pacific. Battling his way against the mountainous Cape Hom seas that roll right around the world, Schouten worked his way westward. The great sailorman Felix Riesenberg, veteran of the Cape Hom passage in the wooden square rigger A . J. Fuller in the 1890s, describes the wild scene in his book Cape Horn: The water rose high, deeply blue between the cracking, combing seas; SEA HISTORY 82, AUTUMN 1997