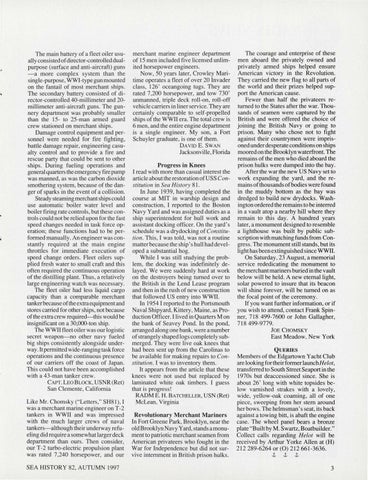 The main battery of a fleet oiler usual ly consisted of director-controlled dualpurpose (surface and anti-aircraft) guns -a more complex system than the single-purpose, WWI-type gun mounted on the fantail of most merchant ships. The secondary battery consisted of director-controlled 40-millimeter and 20millimeter anti-aircraft guns. The gunnery department was probably smaller than the 15- to 25-man armed guard crew stationed on merchant ships. Damage control equipment and personnel were needed for fire fighting, battle damage repair, engineering casualty control and to provide a fire and rescue party that could be sent to other Âˇships. During fuel ing operations and general quarters the emergency fire pump was manned, as was the carbon dioxide smothering system, because of the danger of sparks in the event of a collision. Steady steaming merchant ships could use automatic boiler water level and boiler firing rate controls, but these controls could not be relied upon for the fast speed changes needed in task force operation; these functions had to be performed manually. An engineer was constantly required at the main engine throttles for immediate execution of speed change orders. Fleet oilers supplied fresh water to small craft and this often required the continuous operation of the distilling plant. Thus, a relatively large engineering watch was necessary. The fleet oiler had less liquid cargo capacity than a comparable merchant tanker because of the extra equipment and stores carried for other ships, not because of the extra crew required-this would be insignificant on a 30,000-ton ship. The WWII fleet oiler was our logistic secret weapon- no other navy fueled big ships consistently alongside underway. It permitted wide-ranging task force operations and the continuous presence of our carriers off the coast of Japan. This could not have been accomplished with a 43-man tanker crew. CAPT. LEO BLOCK, USNR (Ret) San Clemente, California Like Mr. Chomsky ("Letters," SH81), I was a merchant marine engineer on T-2 tankers in WWII and was impressed with the much larger crews of naval tankers-although their underway refueling did require a somewhat larger deck department than ours. Then consider, our T-2 turbo-electric propulsion plant was rated 7 ,240 horsepower, and our SEA HISTORY 82, AUTUMN 1997

merchant marine engineer department of 15 men included five licensed unlimited horsepower engineers. Now, 50 years later, Crowley Maritime operates a fleet of over 20 Invader class, 126' oceangoing tugs. They are rated 7,200 horsepower, and tow 730' unmanned, triple deck roll-on, roll-off vehicle carriers in liner service. They are certainly comparable to self-propelled ships of the WWII era. The total crew is 6 men, and the entire engine department is a single engineer. My son, a Fort Schuyler graduate, is one of them. DA YID E. Sw AN Jacksonville, Florida Progr ess in Knees I read with more than casual interest the

article about the restoration of USS Constitution in Sea History 81. In June 1939, having completed the course at MIT in warship design and construction, I reported to the Boston Navy Yard and was assigned duties as a ship superintendent for hull work and assistant docking officer. On the yard 's schedule was a drydocking of Constitution. This, I was told, was not a routine matter because the ship's hull had developed a substantial hog. While I was still studying the problem, the docking was indefinitely delayed. We were suddenly hard at work on the destroyers being turned over to the British in the Lend Lease program and then in the rush of new construction that followed US entry into WWII. In 1954 I reported to the Portsmouth Naval Shipyard, Kittery, Maine, as Production Officer. I lived in Quarters Mon the bank of Seavey Pond. In the pond, arranged along one bank, were a number of strangely shaped logs completely submerged. They were live oak knees that had been sent up from the Carolinas to be available for making repairs to Constitution. I was to inventory them . It appears from the article that these knees were not used but replaced by laminated white oak timbers. I guess that is progress! RADM E. H. BATCHELLER, USN (Ret) McLean, Virginia Revolutionary Merchant Mariner s In Fort Greene Park, Brooklyn, near the old Brooklyn Navy Yard, stands a monument to patriotic merchant seamen from American privateers who fought in the War for Independence but did not survive internment in British prison hulks.

The courage and enterprise of these men aboard the privately owned and privately armed ships helped ensure American victory in the Revolu.tion. They carried the new flag to all parts of the world and their prizes helped support the American cause. Fewer than half the privateers returned to the States after the war. Thousands of seamen were captured by the British and were offered the choice of joining the British Navy or going to prison. Many who chose not to fi ght against their countrymen were imprisoned under desperate conditions on ships moored on the Brooklyn waterfront. The remains of the men who died aboard the prison hulks were dumped into the bay. After the war the new US Navy set to work expanding the yard, and the remains of thousands of bodies were found in the muddy bottom as the bay was dredged to build new drydocks. Washington ordered the remains to be interred in a vault atop a nearby hill where they remain to this day. A hundred years later, a monument designed to resemble a lighthouse was built by publ ic subscription with matching funds from Congress. The monument still stands, but its light has been extinguished since WWII. On Saturday, 23 August, a memorial service rededicating the monument to the merchant mariners buried in the vault below will be held. A new eternal light, solar powered to insure that its beacon will shine fo rever, will be turned on as the focal point of the ceremony. If you want further information , or if you wish to attend, contact Frank Spinner, 718 499-7600 or John Gallagher, 718 499-9779. JOE CHOMSKY East Meadow, New York Q UERIES

Members of the Edgartown Yacht Club are looking for their former launch Helot, transferred to South Street Seaport in the 1970s but deaccessioned since. She is about 26' long with white topsides below varnished strakes with a lovely, wide, yellow-oak coaming, all of one piece, sweeping fro m her stem around her bows. The helmsman 's seat, its back against a towing bitt, is abaft the engine case. The wheel panel bears a bronze plate "Built by M. Swartz, Boatbuilder. " Collect calls regarding Helot will be received by Arthur Yorke Allen at (H) 212 289-6264 or (0 ) 212 661-3636.