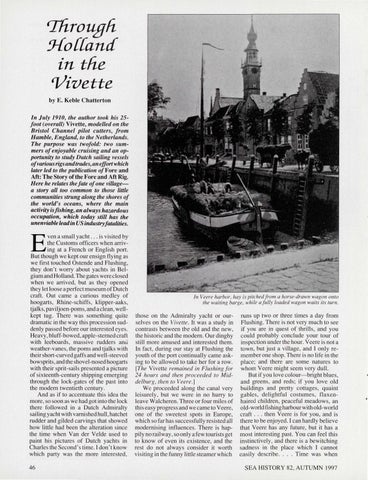 in the 'J/ivette by E. Keble Chatterton In July 1910, the author took his 25f oot (overall) Vivette, modelled on the Bristol Channel pilot cutters, from Hamble, England, to the Netherlands. The purpose was twofold: two summers of enjoyable cruising and an opportunity to study Dutch sailing vessels ofvariousrigsandtrades,aneffortwhich later led to the publication of Fore and Aft: The Story of the Fore and Aft Rig. Here he relates the fate of one vil/agea story all too common to those little communities strung along the shores of the world's oceans, where the main activity is fishing, an always hazardous occupa.tion, which today still has the unenviable lead in US industryfatalities. ven a small yacht ... is visited by the Customs officers when arriving at a French or English port. But though we kept our ensign flying as we first touched Ostende and Flushing, they don ' t worry about yachts in Belgium and Holland. The gates were closed when we arrived, but as they opened they let loose a perfect museum of Dutch craft. Out came a curious medley of hoogarts, Rhine-schiffs , klipper-aaks , tjalks, paviljoen-poms, and a clean, wellkept tug. There was something quite dramatic in the way this procession suddenly passed before our interested eyes. Heavy, bluff-bowed, apple-sterned craft with leeboards, massive rudders anci weather-vanes, the porns and tjalks with their short-curved gaffs and well-steeved bowsprits, and the shovel-nosed hoogarts with their sprit-sai ls presented a picture of sixteenth-century shipping emerging through the lock-gates of the past into the modern twentieth century. And as if to accentuate thi s idea the more, so soon as we had got into the lock there fo llowed in a Dutch Admiralty sai Iing yacht with varnished hull , hatchet rudder and gilded carvings that showed how little had been the alteration since the time when Van der Velde used to paint his pictures of Dutch yachts in Charles the Second's time. I don ' t know which party was the more interested,

In Veere harbor, hay is pitched from a horse-drawn wagon onto the waiting barge, while a fully loaded wagon waits its turn .

those on the Admiralty yacht or ourselves on the Vivette. It was a study in contrasts between tt>.e old and the new, the historic and the modem. Our dinghy still more amused and interested them. In fact, during our stay at Flushing the youth of the port continually came asking to be allowed to take her for a row. [The Vivette remained in Flushing for 24 hours and then proceeded to Middelburg, then to Veere .] We proceeded along the canal very leisurely, but we were in no hurry to leave Walcheren. Three or four miles of this easy progress and we came to Veere, one of the sweetest spots in Europe, which so far has successfully resisted all modernising influences. There is happily no railway, so only a few tourists get to know of even its existence, and the rest do not always consider it worth visiting in the funny little steamer which

runs up two or three times a day from Flushing. There is not very much to see if you are in quest of thrills, and you could probably conclude your tour of inspection under the hour. Veere is not a town , but just a village, and I only remember one shop. There is no life in the place; and there are some natures to whom Veere might seem very dull. But if you love colour-bright blues, and greens, and reds ; if you love old buildings and pretty cottages, quaint gables, delightful costumes, flaxenhaired children, peaceful meadows, an old-world fishing harbour with old-world craft . .. then Veere is for you, and is there to be enjoyed. I can hardly believe that Veere has any future, but it has a most interesting past. You can feel this instinctively, and there is a bewitching sadness in the place which I cannot easily describe . . . . Time was when SEA HISTORY 82, AUTUMN 1997