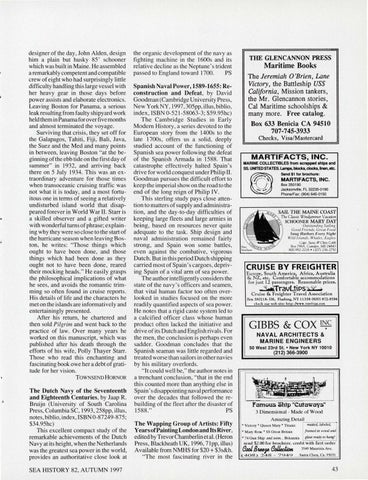 designer of the day, John Alden, design him a plain but husky 85' schooner which was built in Maine. He assembled a remarkably competent and compatible crew of eight who had surprisingly little difficulty handling thi s large vessel with her heavy gear in those days before power assists and elaborate electronics. Leaving Boston for Panama, a serious leak resulting from faulty shipyard work held them in Panama forover five months and almost terminated the voyage. Surviving that cri sis, they set off for the Gal apagos, Tahiti, Fiji , Bali, Java, the Suez and the Med and many points in between, leav ing Boston "at the beginning of the ebb tide on the first day of summer" in 1932, and arriving back there on 5 Jul y 1934. Thi s was an extraordinary adventure for those times when transoceanic cruising traffic was not what it is today, and a most fortuitous one in terms of seeing a relatively undisturbed island world that disappeared fo rever in World War II. Starr is a skilled observer and a gifted writer with wonderful turns of phrase; explaining why they were so close to the start of the hurricane season when leav ing Boston , he writes: "Those things which ought to have been done, and those things which had been done as they ought not to have been done, reared their mocking heads ." He easily grasps the philosophical implications of what he sees, and avoids the romantic trimming so often found in cruise reports . Hi s details of life and the characters he met on the islands are informatively and entertainingly presented. After his return, he chartered and then sold Pilgrim and went back to the practice of law . Over many years he worked on this manuscript, which was published after his death through the efforts of hi s wife, Poll y Thayer Starr. Those who read this enchanting and fascinating book owe her a debt of gratitude for her vision . TOWNSEND HORNOR

The Dutch Navy of the Seventeenth and Eighteenth Centuries, by Jaap R. Bruijn (University of South Carolina Press, Columbia SC, 1993, 258pp, illus, notes, biblio, index, ISBN 0-87249-875; $34.95hc) Thi s excellent compact study of the remarkable achievements of the Dutch Navy at its height, when the Netherlands was the greatest sea power in the world, provides an authoritative close look at SEA HISTORY 82, AUTUMN 1997

the organic development of the navy as fighting machine in the 1600s and its relative decline as the Neptune 's trident passed to England toward 1700. PS Spanish Naval Power, 1589-1655: Reconstruction and Defeat, by David Goodman (Cambridge University Press, New York NY, 1997, 305pp, illus, biblio, index, ISBN 0-521-58063-3; $59.95 hc) The Cambridge Studies in Earl y Modem History , a series devoted to the European story fro m the 1400s to the late 1700s, offers us a solid, deeply studied account of the functioning of Spanish sea power following the defeat of the Spanish Armada in 1588. That catastrophe effectively halted Spain's drive for world conquest under Philip II. Goodman pursues the difficult effort to keep the imperial show on the road to the end of the long reign of Philip IV. This sterling study pays close attention to matters of supply and adm inistration, and the day-to-day difficulties of keeping large fleets and large arm ies in being, based on resources never quite adeq uate to the task. Ship design and naval administration remained fai rly strong, and Spain won some battles, even against the combative, vigorous Dutch . But in this period Dutch shipping carried most of Spain's cargoes, depriving Spain of a vital arm of sea power. The author intelligently considers the state of the navy 's officers and seamen, that vital human factor too often overlooked in studies focused on the more readily quantified aspects of sea power. He notes that a rigid caste system led to a calcified officer class whose human product often lacked the initiative and drive of its Dutch and Engli sh rivals. For the men , the concl usion is perhaps even sadder. Goodman concludes that the Spanish seaman was little regarded and treated worse than sai lors in other navies by his military overlords. "It could well be," the author notes in a trenchant conclusion, "that in the end thi s counted more than anything else in Spain's disappointing naval performance over the decades that fo llowed the rebuilding of the fleet after the di saster of 15 88." PS The Wapping Group of Artists: Fifty Years of Painting London and Its River, edited by Trevor Chamberlin et al. (Heron Press, Blackheath UK, 1996, 7lpp, illus) Available from NMHS for $20 + $3s&h. "The most fascinating river in the

framed in wood and