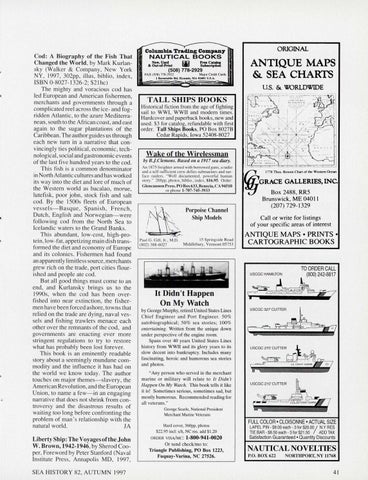 Cod: A Biography of the Fish That Changed the World, by Mark Kurlansky (Walker & Company, New York NY, 1997, 302pp, illus, biblio, index, ISBN 0-8027-1326-2; $2lhc) The mighty and voracious cod has led European and American fishermen, merchants and governments through a complicated reel across the ice- and fogridden Atlantic, to the azure Mediterranean, south to the African coast, and east again to the sugar plantations of the Caribbean. The author guides us through each new turn in a narrative that convincingly ties political, economic , technological , social and gastronomic events of the last five hundred years to the cod. This fish is a common denominator in North Atlantic cultures and has worked its way into the diet and lore of much of the Western world as bacalao, morue, lutefisk, poor john, stock fish and salt cod. By the 1500s fleets of European ves sels- Basque , Spanish, French, Dutch , English and Norwegian-were following cod from the North Sea to Icelandic waters to the Grand Banks. This abundant, low-cost, high-protein , low-fat, appeti zing main dish transformed the diet and economy of Europe and its colonies. Fishermen had found an apparently limitless source, merchants grew rich on the trade, port cities flourished and people ate cod. But all good things must come to an end, and Kurlansky brings us to the 1990s, when the cod has been overfished into near extinction, the fishermen have been forced ashore, towns that relied on the trade are dying, naval vessels and fishing trawlers menace each other over the remnants of the cod , and governments are enacting ever more stringent regulations to try to restore what has probably been lost forever. This book is an eminently readable story about a seemingly mundane commodity and the influence it has had on the world we know today. The author touches on major themes-slavery , the American Revolution , and the European Union, to name a few-in an engaging narrative that does not shrink from controversy and the disastrous results of waiting too long before confronting the problem of man's relationship with the natural world . JA Liberty Ship: The Voyages of the John W. Brown, 1942-1946, by Sherod Cooper, Foreword by Peter Stanford (Naval Institute Press, Annapolis MD, 1997, SEA HISTORY 82, AUTUMN 1997

It Didn't Happen On My Watch by George Murphy, retired United States Lines Chief Engineer and Port Engineer. 50% autobiographical ; 50 % sea stories; 100% entertaining. Written from the unique down under perspective of the engine room. Spans over 40 years United States Lines history from WWII and its glory years to its slow decent into bankruptcy. Includes many fascinating, heroic and humorous sea stories and photos. "Any person who served in the merchant marine or military will relate to It Didn 't Happen On My Watch. This book tells it like it is! Sometimes serious, sometimes sad, but mostly humorous. Recommended reading for all veterans. "