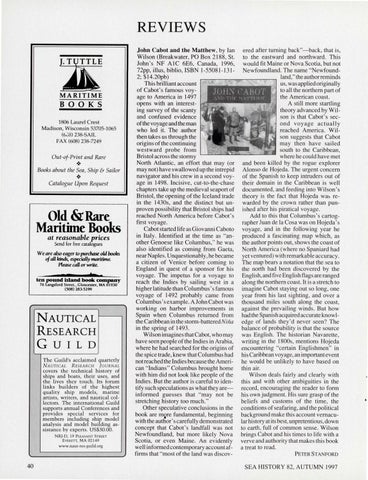 Books about the Sea, Ship & Sailor Catalogue Upon Request

covers the technical history of ships and boats, their uses, and the lives they touch. Its foru m links builders of the highest quality ship models, marine artists, writers, and nautical collectors. T he international Guild supports annual Conferences and provides special services for members including ship model analysis and model building assistance by experts. US$30.00. NRJ-0 ,

J ohn Cabot and the Matthew, by Ian Wi lson (Breakwater, PO Box 2188, St. John's NF AlC 6E6, Canada, 1996, 72pp, illus, biblio, ISBN 1-55081-1312; $14.20pb) This brilliant account of Cabot's famous voyage to America in 1497 opens with an interesting survey of the scanty and confused evidence of the voyage and the man who led it. The author then takes us through the origins of the continuing westward probe from Bristol across the stormy North Atlantic, an effort that may (or may not) have swallowed up the intrepid navigator and his crew in a second voyage in 1498. Incisive, cut-to-the-chase chapters take up the medieval seaport of Bristol, the opening of the Iceland trade in the 1430s, and the distinct but unproven possibility that Bristol ships had reached North America before Cabot's first voyage. Cabot started life as Giovanni Caboto in Italy. Identified at the time as "another Genoese like Columbus," he was also identified as coming from Gaeta, near Naples. Unquestionably, he became a citizen of Venice before coming to England in quest of a sponsor for his voyage. The impetus for a voyage to reach the Indies by sai ling west in a higher latitude than Columbus's famous voyage of 1492 probably came from Columbus's example. A John Cabot was working on harbor improvements in Spain when Columbus returned from the Caribbean in the storm-battered Nina in the spring of 1493. Wilson imagines that Cabot, who may have seen people of the Indies in Arabia, where he had searched for the origins of the spice trade, knew that Columbus had not reached the Indies because the American "Indians" Columbus brought home with him did not look like people of the Indies. But the author is careful to identify such speculations as what they areinformed guesses that " may not be stretching history too much." Other speculative conclusions in the book are mct're fundamental, beginning with the author's carefully demonstrated concept that Cabot 's landfall was not Newfoundland, but more likely Nova Scotia, or even Maine. An evidently well informed contemporary account affirms that "most of the land was discov-

ered after turning back"-back, that is, to the eastward and northward. This would fit Maine or Nova Scotia, but not Newfoundland. The name "Newfoundland," the author reminds us, was applied originally to all the northern part of the American coast. A still more startling theory advanced by Wilson is that Cabot's second voyage actually reached America. Wilson suggests that Cabot may then have sailed south to the Caribbean, where he could have met and been killed by the rogue explorer Alonso de Hojeda. The urgent concern of the Spanish to keep intruders out of their domain in the Caribbean is well documented, and feeding into Wilson's theory is the fact that Hojeda wa~ rewarded by the crown rather than punished after his piratical voyage. Add to this that Columbus's cartographer Juan de Ia Cosa was on Hojeda's voyage, and in the following year he produced a fascinating map which, as the author points out, shows the coast of North America (where no Spaniard had yet ventured) with remarkable accuracy. The map bears a notation that the sea to the north had been discovered by the English, and five English flags are ranged along the northern coast. It is a stretch to imagine Cabot staying out so long, one year from his last sighting, and over a thousand miles south along the coast, against the prevailing winds. But how had the Spanish acquired accurate know ledge of lands they ' d never seen? The balance of probability is that the source was English. The historian Navarette, writing in the 1800s, mentions Hojeda encountering "certain Englishmen" in his Caribbean voyage, an important event he would be unlikely to have based on thin air. Wilson deals fairly and clearly with this and with other ambiguities in the record, encouraging the reader to form his own judgment. His sure grasp of the beliefs and customs of the time, the conditions of seafaring, and the political background make this account vernacular history at its best, unpretentious, down to earth, full of common sense. Wilson brings Cabot and his times to life with a verve and authority that makes this book a treat to read. PETER STANFORD