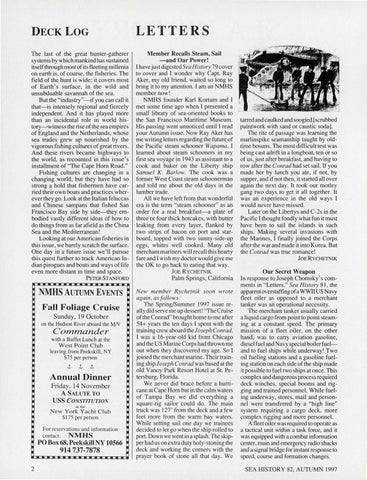 DECK LOG The last of the great hunter-gatherer systems by which mankind has sustained itself through most of its fleeting millenia on earth is, of course, the fisheries. The field of the hunt is wide; it covers most of Earth's surface, in the wild and unsubduable savannah of the sea. But the "industry"-if you can call it that-is intensely regional and fiercely independent. And it has played more than an incidental role in world history~witness the rise of the sea empires of England and the Netherlands, whose sea trades grew up nourished by the vigorous fishing cultures of great rivers. And these rivers became highways to the world, as recounted in this issue's installment of "The Cape Hom Road." Fishing cultures are changing in a changing world, but they have had so strong a hold that fishermen have carried their own boats and practices wherever they go. Look at the Italian feluccas and Chinese sampans that fished San Francisco Bay side by side-they embodied vastly different ideas of how to do things from as far afield as the China Sea and the Mediterranean! Looking at our American fisheries in this issue, we barely scratch the surface. One day in a future issue we'll pursue this quest further to track American Indian pi rogues and boats and ways of life even more distant in time and space. PETER STANFORD

Sunday, 19 October on the Hudson River aboard the MN

Commander with a Buffet Lunch at the West Point Club leaving from Peekskill, NY $75 per person J,

Annual Dinner Friday, 14 November A SALUTE TO USS CONSTITUTION at the

Member Recalls Steam, Sail -and Oar Power! I have just digested Sea History 79 cover to cover and I wonder why Capt. Ray Aker, my old friend, waited so long to bring it to my attention. I am an NMHS member now! NMHS founder Karl Kortum and I met some time ago when I presented a small library of sea-oriented books to the San Francisco Maritime Museum. His passing went unnoticed until I read your Autumn issue. Now Ray Aker has me writing letters regarding the future of the Pacific steam schooner W apama. I learned about steam schooners in my first sea voyage in 1943 as assistant to a cook and baker on the Liberty ship Samuel K. Barlow. The cook was a former West Coast steam schoonerman and told me about the old days in the lumber trade. All we have left from that wonderful era is the term "steam schooner" as an order for a real breakfast-a plate of three or four thick hotcakes, with butter leaking from every layer, flanked by two strips of bacon on port and starboard, topped with two sunny-side-up eggs, whites well cooked. Many old merchant mariners will recall this hearty fare and I wish my doctor would give me the OK to go back to eating that way. JOE RYCHETNIK

Palm Springs, California New member Rychetnik soon wrote again, as follows: The Spring/Summer 1997 issue really did serve me up dessert! "The Cruise of the Conrad" brought home to me after 54+ years the ten days I spent with the training crew aboard th eloseph Conrad. I was a 16-year-old kid from Chicago and the US Marine Corps had thrown me out when they discovered my age. So I joined the merchant marine. Their training ship Joseph Conrad was based at the old Vanoy Park Resort Hotel at St. Petersburg, Florida. We never did brace before a hurricane at Cape Horn but in the calm waters of Tampa Bay we did everything a square-rig sailor could do. The main truck was 127' from the deck and a few feet more from the warm bay waters. While setting sail one day we trainees decided to let go when the ship rolled to port. Down we went in a splash. The skipper had us on extra duty holy-stoning the deck and working the comers with the prayer book of stone all that day. We

tarred and caulked and soogied [scrubbed paintwork with sand or caustic soda]. The rite of passage was learning the marlinspike seamanship taught by oldtime bosuns. The most difficult test was being cast adrift in a longboat, ten or so of us, just after breakfast, and having to row after the Conrad had set sail. If you made her by lunch you ate, if not, by supper, and if not then, it started all over again the next day. It took our motley gang two days to get it all together. It was an experience in the old ways I would never have missed. Later on the Libertys and C-2s in the Pacific I thought fondly what fun it must have been to sai l the islands in such ships. Making several invasions with the Marines, I finally joined the Corps after the war and made it into Korea. But the Conrad was true romance! JOERYCHETNIK

Our Secret Weapon In response to Joseph Chomsky 's comments in "Letters," Sea History 81, the apparentoverstaffingof a WWII US Navy fleet oiler as opposed to a merchant tanker was an operational necessity . The merchant tanker usually carried a liquid cargo from point to point steaming at a constant speed. The primary mission of a fleet oiler, on the other hand, was to carry aviation gasoline, diesel fuel and Navy special boiler fueland to fuel ships while underway! Two oil fueling stations and a gasoline fueling station on each side of the ship made it possible to fuel two ships at once. This complex and dangerous process required deck winches, special booms and rigging and trained personnel. While fueling underway, stores, mail and personnel were transferred by a "high line" system requiring a cargo deck, more complex rigging and more personnel. A fleet oiler was required to operate as a tactical unit within a task force, and it was equipped with a combat information center, main and emergency radio shacks and a signal bridge for instant response to speed, course and formation changes. SEA HISTORY 82, AUTUMN 1997