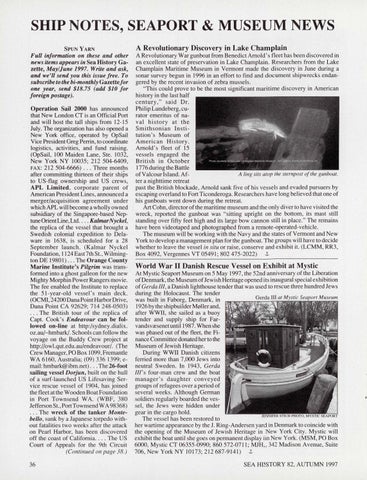 Full information on these and other news items appears in Sea History Gazette, May/June 1997. Write and ask, and we&#39;ll send you this issue free. To subscribe to the bi-monthly Gazette for one year, send $18.75 (add $10 for foreign postage). Operation Sail 2000 has announced that New London CT is an Official Port and will host the tall ships from 12-15 July. The organization has also opened a New York office, operated by OpSail Vice President Greg Perrin, to coordinate logistics, activities, and fund raising. (OpSail, 100 Maiden Lane, Ste. 1032, New York NY 10035; 212 504-6409, FAX: 212 504-6666) ... Three months after committing thirteen of their ships to US-flag ownership and US crews, APL Limited, corporate parent of American President Lines, announced a merger/acqui si tion agreement under which APL will become a wholly owned subsidiary of the Singapore-based Neptune Orient Line, Ltd .... Kalmar Nyckel, the replica of the vessel that brought a Swedish colonial expedition to Delaware in 1638, is scheduled for a 28 September launch. (Kalmar Nyckel Foundation, 1124 East 7th St., Wilmington DE 19801) ... The Orange County Marine Institute&#39;s Pilgrim was transformed into a ghost galleon for the new Mighty Morphin Power Rangers movie. The fee enabled the Institute to replace the 51-year-old vessel&#39;s main deck. (OCMI, 24200 Dana Point Harbor Drive, Dana Point CA 92629; 714 248-0503) ... The British tour of the replica of Capt. Cook&#39;s Endeavour can be followed on-line at http:/sydney .dialix. oz.au/-hmbark/. Schools can follow the voyage on the Buddy Crew project at http://owl.qut.edu.au/endeavour/. (The Crew Manager, PO Box 1099, Freman tie WA 6160, Australia; (09) 336 1399; email: hmbark@ibm.net) .. . The26-foot sailing vessel Dorjun, built on the hull of a surf-launched US Lifesaving Service rescue vessel of 1904, has joined the fleet at the Wooden Boat Foundation in Port Townsend WA. (WBF, 380 Jefferson St., Port Townsend WA 98368) ... The wreck of the tanker Montebello, sunk by a Japanese torpedo without fatalities two weeks after the attack on Pearl Harbor, has been discovered off the coast of California.... The US Court of Appeals for the 9th Circuit (Continued on page 38.) 36

A Revolutionary Discovery in Lake Champlain A Revolutionary War gunboat from Benedict Arnold&#39;s fleet has been discovered in an excellent state of preservation in Lake Champlain. Researchers from the Lake Champlain Maritime Museum in Vermont made the discovery in June during a sonar survey begun in 1996 in an effort to find and document shipwrecks endangered by the recent invasion of zebra mussels. &quot;This could prove to be the most significant maritime discovery in American history in the last half century,&quot; sai d Dr. Philip Lundeberg, curator emeritus of naval history at the Smithsonian Institution&#39;s Museum of American History. Arnold&#39;s fleet of 15 vessels engaged the Briti sh in October 177 6 during the Battle ofValcour Island. AfA ling sits atop the sternpost of the gunboat. ter a nighttime retreat past the British blockade, Arnold sank five of his vessels and evaded pursuers by escaping overland to Fort Ticonderoga. Researchers have long believed that one of his gunboats went down during the retreat. Art Cohn, director of the maritime museum and the only diver to have visited the wreck, reported the gunboat was &quot;sitting upright on the bottom, its mast still standing over fifty feet high and its large bow cannon still in place.&quot; The remains have been videotaped and photographed from a remote-operated-vehicle. The museum will be working with the Navy and the states of Vermont and New York to develop a management plan for the gunboat. The groups will have to decide whether to leave the vessel in situ or raise, conserve and exhibit it. (LCMM, RR3, Box 4092, Vergennes VT 05491; 802 475-2022) ..t

World War II Danish Rescue Vessel on Exhibit at Mystic At Mystic Seaport Museum on 5 May 1997, the 52nd anniversary of the Liberation of Denmark, the Museum of Jewish Heritage opened its inaugural special exhibition of Gerda II I, a Danish lighthouse tender that was used to rescue three hundred Jews during the Holocaust. The tender was built in Faborg, Denmark, in Gerda III at Mystic Seaport Museum 1926 by the shipbuilder Mi;;ller and, after WWII, she sailed as a buoy tender and supply ship for Farvandsvresenetuntil 1987. When she was phased out of the fleet, the Finance Committee donated her to the Museum of Jewish Heritage. During WWII Danish citizens ferried more than 7 ,000 Jews into neutral Sweden. In 1943, Gerda Ill&#39; s four-man crew and the boat manager &#39;s daughter conveyed groups of refugees over a period of several weeks. Although German soldiers regularly boarded the vessel, the Jews were hidden under gear in the cargo hold. The vessel has been restored to her wartime appearance by the J. Ring-Andersen yard in Denmark to coincide with the opening of the Museum of Jewish Heritage in JNew York City. Mystic will exhibit the boat until she goes on permanent display iin New York. (MSM, PO Box 6000, Mystic CT 06355-0990; 860 572-0711; MJH,, 342 Madison Avenue, Suite 706, New York NY 10173; 212 687-9141) ..t SEA